Chaz Davies was quick to celebrate, as soon as he crossed the line; the battle between his Panigale and that of team Barni's Forés was won by the Welshman thanks to a last gasp pass, but it wasn't quite enough.

A few tenths ahead of him, Johnny Rea had already won, having got away well from second. Penalised following the red flag that was brought out due to an accident between Camier, Torres and Savadori – the three-time champ duelled (a little) with Melandri, Davies and Fores, before breaking free of the red bikes and racing to the line with a pace that his rivals were unable to match: “it was quite difficult for me, because it was cold and the track slippery. I was able to win anyway.” The Northern Irishman has now won 56 races, only 3 less than Carl Fogarty.

If he had made a better start, Davies could probably have fought for the win: “I caught up and gave it my all, considering how the weekend started, I'm pleased with second place”.

Spaniard Fores is proving to be a sure thing. First among the "independent" rider, the Barni rider is consistently among the podium fighters:: “I had fun. Despite not having great feeling with the Panigale.”  What exactly could he have done if he had the right feeling?!

A frontrunner and constant presence throughout the race, Melandri paid for his mistake in the final stages, missing out on a podium finish.

Fifth for Van Der Mark with the first of the R1s, sixth for Tom Sykes on the Ninja; the Brit was unable to keep pace with the top three and, while his team-mate scored the win, he struggled to keep up with the frontrunners.

Seventh for Alex Lowes, and a solid debut for Michael Ruben Rinaldi: the Superstock champion closes eighth, bearing #21 his performance today augers well for the future.

In the fight for the top ten, Razgatlioglu scored ninth place, ahead of Ramos. Baz rode the BMW into eleventh position, ahead of Gagne on the Honda and Giugliano on the RSV4. Hernandez and Savadori round out the points zone.

The original race was brought to a halt with the red flag following bad crash at turn 11 during lap three. Torres and Camier made contact, which caused Camier to crash and Torres to run him over; Savadori also fell, with the trio all hitting the ground hard. Camier was taken directly to the medical centre, the race red-flagged and restarted a few minutes later. 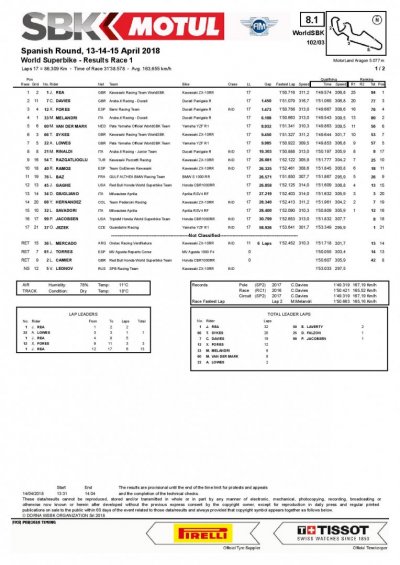 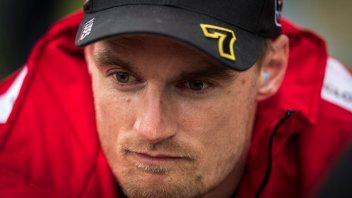 Davies Angry: "Melandri was ridiculous, but that's how he is"

The German test rider will also be on track tomorrow to continue developing the RC213V: "The rain and cold affected our plans."
5 days 18 hours ago

VIDEO. The Japanese team's rider missed the last three GPs of 2019 to solve his physical problems and get to the Sepang tests in the best of shape.
6 days 13 hours ago