The sign that Race Direction put out ten minutes before the start was clear and the riders and fans were advised: Ladies & Gentlemen, this will be a dry race.

But not entirely: the asphalt on the Termas de Rio Hondo circuit actually had large spots of water, left by the rain that had fallen over the previous hours.

Which tyres to put on? Which settings to use? In these cases, experience – and courage – come into play on the track; with 100 starts in the middle class, Mattia Pasini has nothing to envy of anyone and to win his second Grand Prix in the category, he put on slicks, using class – following the tightest and most profitable lines possible – and skill: precisely on the final lap, well-aware of Xavi Vierge’s imminent, last ditch attack, Mattia changed his line, forcing the Spaniard onto the wet and into a mistake that made him run wide.

Finishing the race as winner for the second time in Moto2 launches the Italian as one of the title favourites: “I stayed very focused, without making mistakes – number 54 said after the race – With this win, I am on the right path. The podium is my consistent goal.” Mattia is now in the Championship lead.

Thanks to his second place finish, Xavi Vierge repeats the result he did in Japan last year; the Spaniard, wearing a bright white smile, was moved when he arrived in parc fermé; Portuguese rider Oliveira was a bit more “down in the mouth”, as he wanted to ride his KTM to the top step of the podium at all costs, but various imprecisions prevented that and his third place finish anything but satisfies him.

Just off the podium was Lorenzo Baldassarri, in any case a protagonist in the race, confirming that he is one of the riders to beat. In his hundredth Moto2 race, Alex Marquez expected something more than his fifth place finish.

The performance of the two riders not too far from the top three was rather interesting: sixth place for Australian Remy Gardner, the great Wayne Gardner’s son, finishing ahead of Moto3 World Champion Joan Mir, seventh. The Swiss rider was ahead of Aegerter, a disappointed “Pecco” Bagnaia in ninth who consequently lost his leadership in the overall standings.

British rider Danny Kent bested Sam Lowes who did finish the race today. Ahead of the two English riders were Schrotter and Lecuona. Andrea Locatelli collects a championship point, unlike Luca Marini who finished sixteenth. 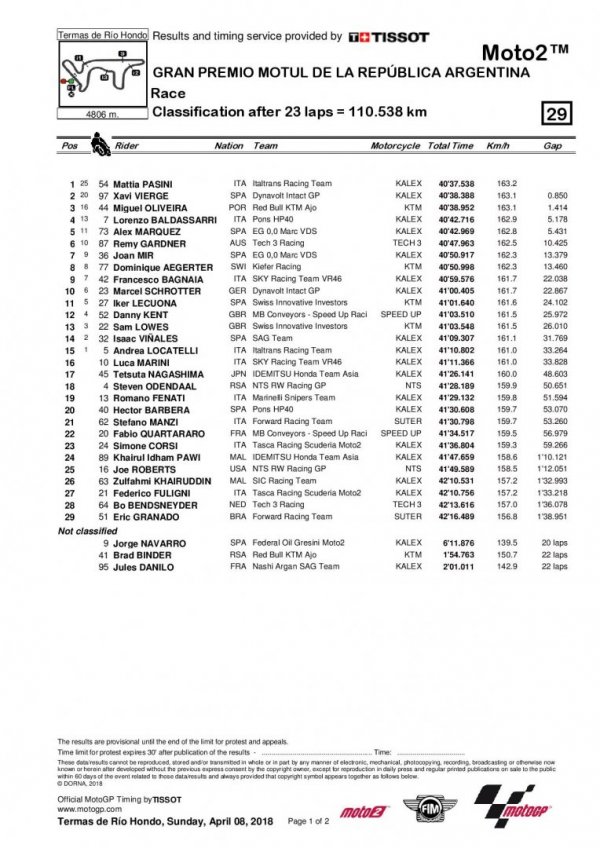 An embarrassing moment for Audi Formula E driver Daniel Abt who, during the virtual race in Berlin, had an eSports professional race in his place:...
16 hours 1 min ago

Rainey: "With the way things are in California right now, there is no way we can race with spectators at Laguna Seca in July ". The series is set to...
3 days 33 min ago

The round scheduled for the Circuito do Estoril from the 4th-5th July would go ahead as planned and become the season opener, to be followed by the...
6 days 5 hours ago