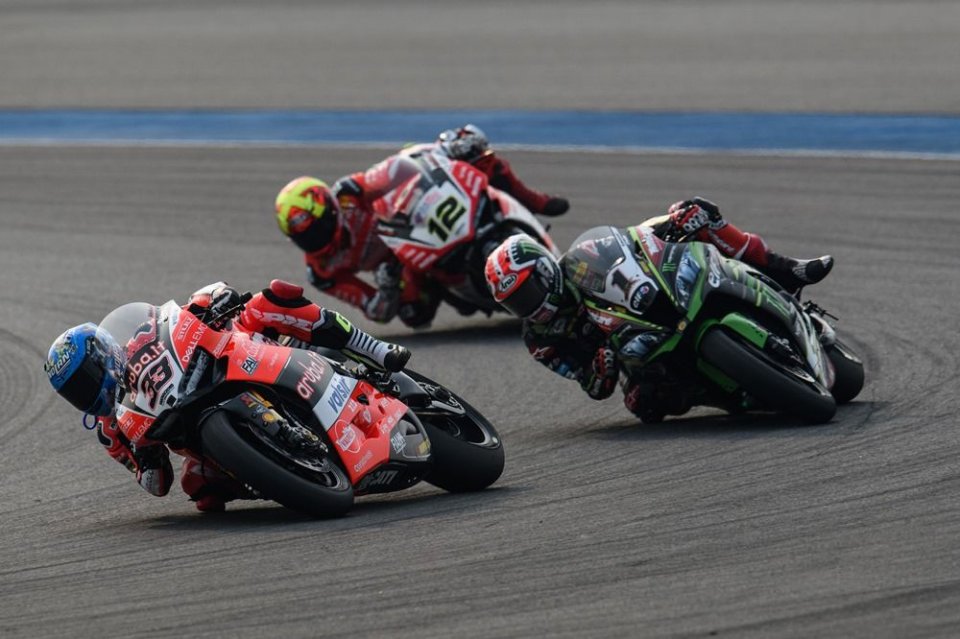 A thrilling battled ensued at Chang, with Johnny Rea and Chaz Davies sharing the weekend's spoils. The Cannibal clocked up another win, taking the championship lead in the process, over a weekend in which Marco Melandri was left dealing with a hard to tame Ducati. Meanwhile, Yamaha domination continues in Supersport, with four R6 bikes occupying the top spots.

THE GOOD The second place finish in Race 1 is the Barni team's best ever result in Superbike. Hats off to Xavi Forés then, the revelation of this early part of the season, having already reached the podium in Australia. Two rounds in, and the Spaniard is lying third in the championship, who would have bet on that?!

THE UGLY A frustrating weekend at Buriram for Tom Sykes. On Saturday, the Kawasaki rider had braking system issues to deal with, which meant he was forced to settle for sixth place. The following day proved even worse, the rider having to retire due to a lack of confidence with the front of his bike.

THE BAD Marco Melandri had high hopes on arriving in Buriram but his plans went up in smoke just one day in. Come race day, the Panigale proved something of a wild horse that the Italian struggled to tame, losing his championship lead as a result.

THE DISAPPOINTMENT This may only be round two, but we're yet to see that spark that we expected between Loris Baz and the BMW. In Thailand too, the Frenchman's performance was something of a disappointment, no doubt conditioned also by his physical conditions. Let's hope for a change once he returns to Europe.

THE CONFIRMATION in SuperSport, Yamaha is now a sure thing. Having snatched the top four positions in Australia, the trend continued in Thailand. They couldn't ask for more right now.

THE PASS Andrea Dovizioso set the example and Randy Krummenacher has been quick to follow the Italian's lead. For more details, take a look at the last lap of the SuperSport race where, in perfect Dovi style, the Swiss rider crossed paths with Mahias at the last corner to take the win.

THE MISTAKE Julez Cluzel dreamed of repeating his 2016 Buriram win but instead the Frenchman crashed five laps from the end while leading the race.

THE SURPRISE Leon Camier has turned things around in Honda after what was a 2017 to forget. It's great to see the Fireblade back at the sharp end and ready to fight with the top teams. On Saturday he just missed out on a podium, but he's clearly on the right track.

THE INTERESTING FACT Ever since the Superbikes have raced at Chang, Kawasaki has always reached the podium. So how strange it was to see neither Rea nor Sykes up there in race 2.

I TOLD YOU SO At the end of race 1, Tom Sykes was ready to fight back, going as far as to say: “On Sunday I'll be ready, we can fight for the win”. But Tom clearly hadn't talked it over with his ZX-10RR.