Final efforts in Jerez for the smallest engine class riders who will be busy in Losail in a week for the first round of the season. On the final day of tests, the weather was the protagonist, with rain keeping the teams and riders in check. Despite a few rays of light, the weather did not let the track dry out, so it was better to focus on some race simulations, testing the rain tyres.

If we absolutely must look at the times, the astonishing best time was done by Thai rider Atiratphuvapat astride the team Asia Honda. The rider proved to be the fastest thanks to his time of 1’52”808, done in the morning session ahead of the KTM machines ridden by Marcos Ramirez (+0.372) and Dennis Foggia (+0.475).

This means that, in order to crown the best of the last outing ahead of the season opener, we need to take a step back to yesterday. It is Jorge Martin with a smile on his face who, thanks to a time of 1’45”945, managed to break the record previously set by Enea Bastianini by a tenth of a second. Looking down the exhaust of the Italian are Aron Canet and Fabio Di Giannantonio, followed by Marco Bezzecchi, the best in the KTM camp. In Qatar, a concrete sign is expected from the Austrians, since only two bikes are in the top ten. Also called on to play catch-up were the Sky Racing Team riders, namely Bagnaia and Foggia, the first eighteenth and the second two positions behind his teammate. 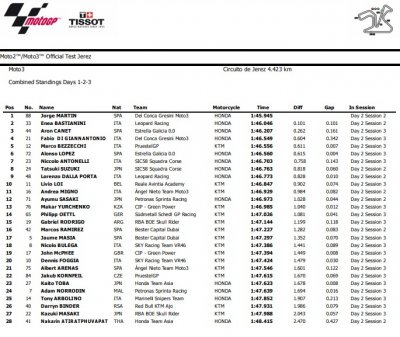