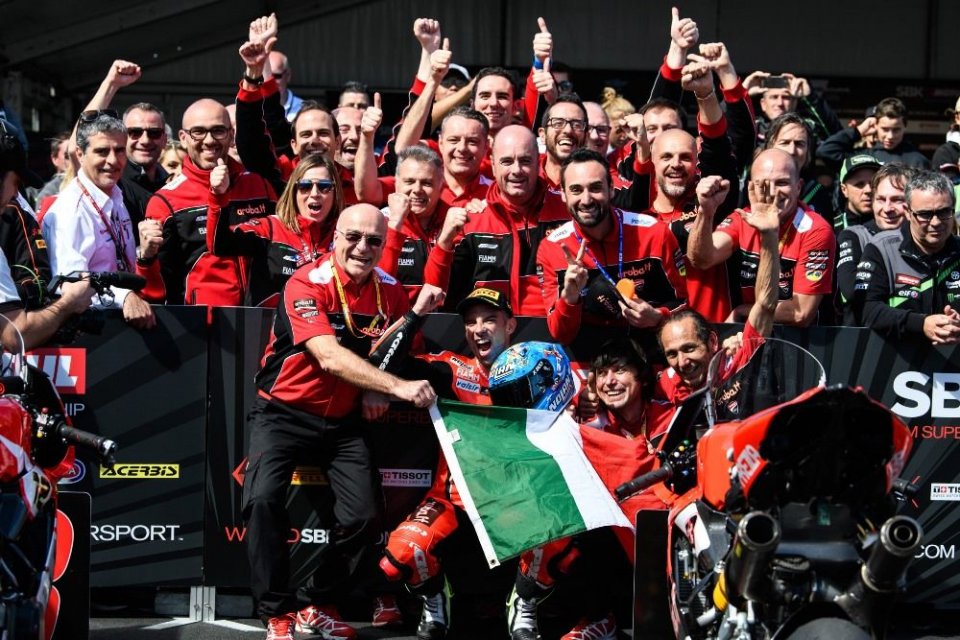 Welcome back Superbikes! The curtain went up on the new season in Australia, with Marco Melandri playing the starring role. During a weekend in which the tyres suffered a crisis that saw the introduction of the flag to flag (a first for the production-derived series, the Ducati rider proved to be a sure thing, bringing home the double win. As if that wasn't enough, the weekend's result sees him become the most successful Italian of all time in SBK, with 22 wins, overtaking Max Biaggi.

THE GOOD It could only be him, or rather #33. What more could we have asked of the Aruba rider, who combined speed and intelligence to dominate on the Victoria-based track? Melandri deserves the 'good' mention, which he shares with a certain Troy Bayliss, who at the age of 48 lined up on the Australian Superbike grid and scored an impressive second-place finish in Race 1. The years may pass, but he can still twist that throttle.

THE BAD the Panigale looked like a crazy horse along the straight, but Melandri showed that he knows exactly what to do during a rodeo, taking his beast and powering it to victory.

THE UGLY Overheating, the creation of blisters, a risk of bursting. When it rains, it really pours. The Pirelli technicians sure had their work cut out over the weekend with various tyre reliability issues. We can't help but wonder what use testing really is...

THE DISAPPOINTMENT The new regulation seemed to have favoured Yamaha in particular, meaning that hopes were high for a podium finish for the R1 in Australia. The weekend failed to meet with expectations though, with Lowes and van der Mark preferring to pass the time battling with each other rather than chasing the leaders.

THE SURPRISE He had been on the top step of the podium in every Australian race since 2015, but this time Johnny Rea was forced to settle for second place in race 2 following the disappointment of Saturday. If this isn't a surprise...

THE CONFIRMATION Whether you like it or not, there's no denying that Phillip Island is always a guarantee of thrilling races, fought all the way to the line. This theory was proved once more.

THE MISTAKE How about race 2. This is only the first round but Chaz Davies already has a DNF to his name. The same goes for Eugene Laverty, who took himself out while leading the race with the Aprilia.

THE PASS The braking point at the end of the straight is one of the most exciting spots. So we'll leave the choice of best pass to you, though Rea passing Melandri three laps from the end left us with our heart in our mouth.

THE INTERESTING FACT Marco Melandri finished race 1 in a time twelve seconds quicker than Rea's 2017 win and ten seconds quicker in race 2. Did they not introduce a rule to limit the revs?

I TOLD YOU SO Xavi Forés said it all on Saturday: “On Sunday I want to be on the podium". Job done for the Barni rider, who earned a well-deserved podium finish.