In a week's time, MotoGP will be back on track at Qatar for the final test before the season kicks off on 18 March. During the three-day test at Buriram, it was decided that at the Losail test, the final hour will see riders take to an artificially wet track, so that they are better prepared in case of a wet race. Let's not forget that the weather brought the entire organisation to its knees last year, with Saturday cancelled altogether.

The Safety Commission has decided to take this action for two reasons: firstly, it will allow riders to better understand tyre behaviour on the wet track, in that rain in Qatar is something else. Secondly, they can evaluate light reflection on the water, as the floodlights may cause problems.

We spoke to the riders about this at Chang, starting with Valentino Rossi: “I have no problems – said the Doctor – I'm ok to race in the wet, I'm ready”. The nine-time champion is not intimated, while Andrea Iannone commented: “I'd rather wait and see how it is before passing judgment but I think it's a good idea to have this opportunity".

Danilo Petrucci had this to say: “I'm pleased that the riders are being given this chance, we'll try to understand our level of confidence iwht the tyres and see whether water spray will be a problem or not”. He is echoed by Franco Morbidelli: “It will be a visibility test, that's what they said at the Safety Commission. so we'll all be out in a line and will see what happens when water sprays up from the tyres, we won't be at the limit of course. This is a welcome test”.

Jack Miller also spoke up: “Last year was a really unlucky weekend at Losail. It will be a really important hour for all of us, to understand whether is possible to race in certain conditions”. As did Dani Pedrosa: “Safety is the priority as always. We will all test and then I hope we are all of the same opinion at the end. Scott Redding closed by saying: “It's an important decision, because it's a new situation for everyone. We'll make the necessary evaluations and then decide together with the other riders.” 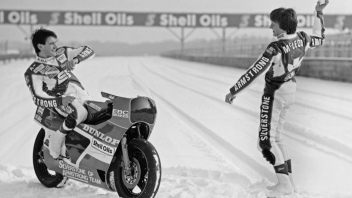 As the situation remains in a state of constant evolution, new dates for the French GP and the recently-postponed Gran Premio de España cannot be...
1 day 1 hour ago

“It would be great for the sport and the country if the interest of the past returned. Hayden was one of my heroes and I cried when he won"
1 week 20 hours ago