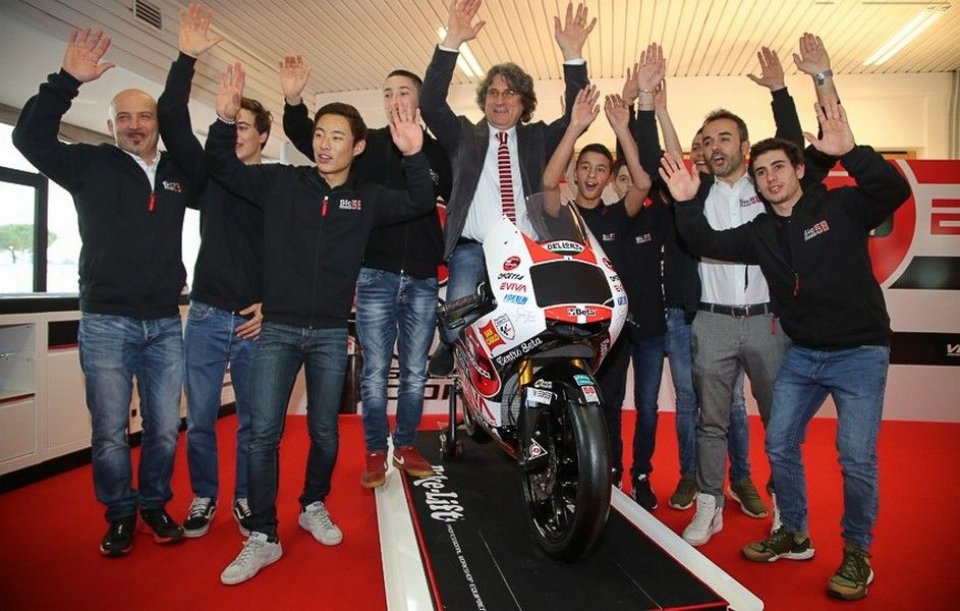 There is always a touch of emotion when Marco Simoncelli's name is mentioned, and today's event was further proof of this. We're talking about the presentation of the SIC58 Squadra Corse that, for the second consecutive year, will have two bikes on the Moto3 grid, continuing along the path that father Paolo set out upon back in 2013. A path that hasn't forgotten its roots and that sees the team focus on young riders in the lower classes; this year, the team will also be present in the CEV and the European Talent Cup.

Inside the “Galleria di Marco” at the Misano circuit, a place with double ties to Sic, Paolo Simoncelli took to the stage. “What's changed since last year is that we are older  – he jokes – but we are also more sure of ourselves. Last year we were a little dazed as we made our debut but we realised we can do well and have good potential, and this gives us confidence. The team has undergone changes, though is still headed by Marco Grana, the sole crew chief. This formula worked and we want to continue with it: there can often be friction between crew chiefs and so to avoid that, this is what we're doing”.

In Paolo's mind, there is still one important thought, already expressed last year and ready to be integrated also by the arrival of Niccolò Antonelli: “It's only right that the team brand comes before everyone else: a legend to be carried forward, and where we simply serve as “Transporters”. Niccolò's arrival is something that both we and he wanted; I am pleased he's chosen us and think we will get on very well. In this job, it is the wrist that makes the difference, so the rider, and I believe he is in the right place to be able to give it his all”.

Paolo is excited and you can see this in his face. He has faith in both his riders, and has a word of warning for their rivals with regard to Tatsuki Suzuki. “Tatsu will be a surprise, seeing as he received so little support in his first two years, it was as if he didn't complete them at all. While last year with us, he absorbed everything we told him and I'm sure he can do very well. Arbolino? I don't want to talk about him. The general aim is to win, and to do that we need speed and luck”.

This season, the team will no longer share a logistical base with that of Fausto Gresini, having acquired its own structure, bu the former 125 world champion remains an important part of the team as well as a personal friend of Paolo's. “I'm pleased I'm still close to Paolo, for many reasons. I want to join him on this journey, we have shared tough times and now we want to share some pleasant ones”. During the course of the presentation, the two riders also took to the stage. First up, Niccolò Antonelli, who had this to say: “On Paolo's advice, I've started eating more and have put on 4 kg  – he begins jokingly - and the first time I got on the bike I focused only on enjoying myself. I want to get back to the front, we'll see; Tatsuki is a good guy and he's fast -  it will be a pleasure to help each other".

The Japanese echoes this sentiment, becoming increasingly "japo – riccionese", as featured on his bike in fact: “Last year I crashed too often, this year I want to improve and hope we will both be very fast”. Managing the riders is Marco Grana, former crew chief with team Gresini, who also has high hopes:“Last year everything was new and we weren't able to achieve the speed we needed, something that left us disapponted. This year we want to do just that, improving in qualifying too, as starting up front really helps in this category”.