The Moto2 and Moto3 riders were luckier at Valencia today. Yesterday, rain kept (almost) all teams inside the garages, while today the skies were clearer. The track was still damp this morning, with low temperatures before the sun came out this afternoon.

The track was not in optimum conditions and this is reflected in the times. One important note: as these are official IRTA tests, Moto2 riders do not have engine provided by the organisation. This means each team has to supply its own engine and there is no rule against teams bringing a somewhat more powerful unit.

having said that, let's look at the times, and in Moto2, the Italians rule with three in the top six. The fastest was Lorenzo Baldassarri, team Pons' newest recruit, who set a best of 1’36”149. A good second from last year's pole time, set by Alex Marquez in 1’35”050.

0”185 from Balda is the KTM of Oliveira, who closes a couple of tenths ahead of Simone Corsi, who has left Speed Up for the Kalex of team Tasca. he is followed by the team Intact GP pairing of Schrotter and Vierge.

Sixth place, 0”685 from the front, for Mattia Pasini, one of the presumed frontrunners this season. Behind him is Barbera who, after 8 years in MotoGP, is an expert 'new-entry' in Moto2, a category in which he has never raced. The Spaniard precedes Brad Binder, on the KTM. and Fabio Quaratararo.

Romano Fenati just missed out on the top ten, placing behind Isaac Vinales. The italian is nevertheless the best-placed rookie, if we exclude Barbera. His direct rival Mir is not present though, as team Marc VDS (and also Sky VR46) is not taking part in these tests. 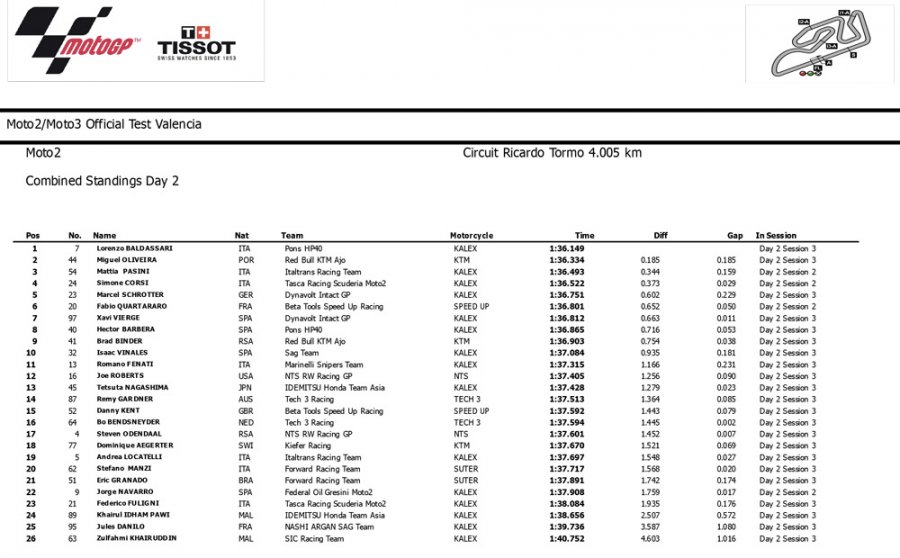 Over to Moto3, which for now is speaking Spanish. Leading the way is Gabriel Rodrigo  with the KTM, just 0.09 ahead of fellow countryman Jorge Martin on the Honda. The fastest time was a 1’40”324, almost two seconds from the most recent pole time.

While the home riders took charge today, the Italians also feature in what was a very close run session with 9 riders in less than a second. Third for Marco Bezzecchi, who moves from the Mahindra to the KTM. It seems the change has done him good.

Also on a Honda, but in SIC58 Squadra Corse colours, Niccolò Antonelli has started off on the right foot and places fourth, ahead of Bastianini. Enea has also changed team, moving to team Leopard, champions last year with Mir.

He is followed by Oettl and Arenas, while Tony Arbolino places eighth, now with Team Sniper. Tenth for Fabio Di Giannantonio, one of few to have ridden in the wet yesterday, ahead of Lorenzo Dalla Porta. 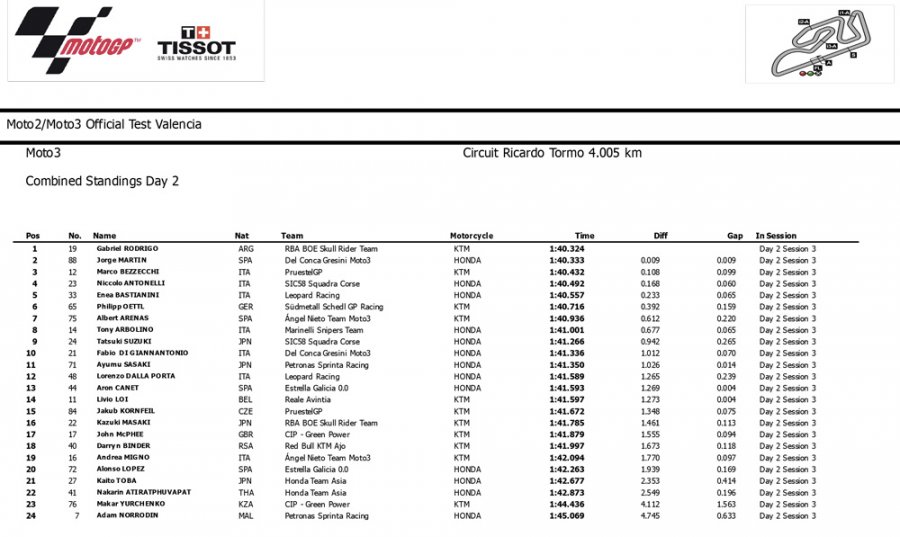 The Californian Yamaha rider took the flag alone ahead of teammate Gagne and Herrin, who beat the Ducati rider in a photo finish. Elias crashed out...
1 day 9 hours ago

Defending champion wins ahead of Scholtz and Gagne. 5th and 7th, Wyman's and Jacobsen's two best Ducatis. Elias stopped by a problem.
2 days 1 hour ago

The reigning champion started has started 2020 in the best possible way, heading his teammate Jake Gagne. Race 1 at 22:00 on Eurosport
2 days 22 hours ago

In a video on You Tube, the driver defended his reasons but confirms the end of his experience with Audi in the Formula E
6 days 8 hours ago