At 6 PM, the curtain fell on the first day of tests in Jerez, where all the top teams were hard at work. Everyone was anxious to see the protagonists in action, called on to reckon with the new technical regulations. If anyone had been hoping for a change in scenery, they were soon disappointed.

Indeed, because Johnny Rea once again played the starring role, finishing Tuesday in the lead. In short, the same script as always, with the Northern Irishman setting the agenda, leaving only crumbs for his rivals. In fact, the Cannibal was the only one to drop below the 1’40” mark, stopping the clock at 1’39”862. Compared with his performance in November, when he managed to do even better than the MotoGP bikes, the result is just over a second slower.

So, Johnny set the pace, but Sykes tried to stay on his pipes, filing the day away with the third best time (+0.316). The Kawasaki rider already had the taste of second place in his mouth when, on his last available attempt, Alex Lowes (+0.202) snatched it from him. It was without a doubt an encouraging afternoon in the Yamaha camp, with the Brit’s R1 finding the power to finish between the two teammates. Michael Van der Mark trailed a bit farther behind, only sixth with a gap of almost nine tenths between him and the leader (+0.896).

Turning the most laps of the day, no less than 83, were the Dutchman and the American Honda rider, Jake Gagne. Ahead of Van der Mark’s Yamaha were the Ducatis ridden by Marco Melandri (+0.376) and Chaz Davies (+0.842), also called on to reckon with the reduced engine rpms. If, on one hand, the Italian confirmed his confidence on the Jerez track, on the other, the Welshman had to reckon with a gap behind Rea of more than eight tenths. It was only the first day and it is not a race weekend, but this indication is one that Chaz cannot underestimate.

There was also room in the top ten on Tuesday for the Aprilias ridden by Eugene Laverty (+0.913) and Lorenzo Savadori (+1.177), albeit with significant gaps. Between the two teammates was Leon Camier’s Honda (+1.026). Everyone expected to see the Fireblade with the Magneti Marelli electronics, but that début was postponed until the Portimão tests. In today’s rankings, the Ten Kate rider was ahead of Yamaha tester Niccolò Canepa, busy astride the R1 alongside the two factory rides. The reigning Endurance champion did not do too badly with the ninth best time.

Also in action today was the Stock1000 winner, Michael Rinaldi, capable of staying on the pipes of Loris Baz and his BMW with a gap of just 73 thousandths. The team Althea Frenchman had to settle for eleventh place, dealing with a completely new bike compared with the Ducati he used with Avintia in MotoGP. Things went worse for Jordi Torres, only thirteenth with almost a second and a half to recover, hounded in the rankings by Leon Haslam and Lorenzo Zanetti, the latter busy testing the Panigale V4 that will make its début next year in the Championship.

In addition to the top class, a few SuperSport riders are also in Spain. The fastest was Raffaele De Rosa with a time of 1’43”738 ahead of Kenan Sofuoglu, Hikari Okubo and Ayrton Badovini. The riders will be back on the track tomorrow for the second and final day of tests. 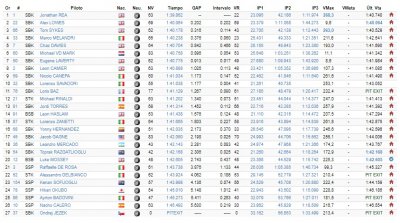 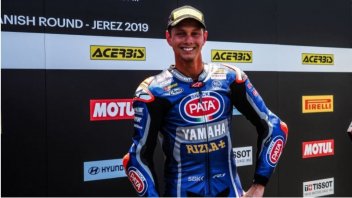 The Californian Yamaha rider took the flag alone ahead of teammate Gagne and Herrin, who beat the Ducati rider in a photo finish. Elias crashed out...
18 hours 36 min ago

Defending champion wins ahead of Scholtz and Gagne. 5th and 7th, Wyman's and Jacobsen's two best Ducatis. Elias stopped by a problem.
1 day 10 hours ago

The reigning champion started has started 2020 in the best possible way, heading his teammate Jake Gagne. Race 1 at 22:00 on Eurosport
2 days 8 hours ago

In a video on You Tube, the driver defended his reasons but confirms the end of his experience with Audi in the Formula E
5 days 18 hours ago

It was decided by the Board of Directors via video conference call. Previously the FIM-Dorna contract provided for a minimum of 13 Grand Prix. In F.1...
1 week 11 hours ago