In a few days' time, the 2018 Superbike will get underway with testing at both Jerez de la Frontera and Portimao. The Yamaha Pata team will be out on track with its official riders Alex Lowes and Michael Van Der Mark.

The young Dutchman, the 2014 Supersport world champion, thus begins his second season with the Japanese bike: “I'm really excited -starts ‘Magic Michael- we'll soon be back on track and I can't wait. We in team Pata are curious to see how it will go. The end of last season was really good for us and, after the introduction of the new regulation, the level of competitiveness of the various bikes should be more in line now. In theory at least, because we'll have to wait two or three rounds to have a clearer idea”.

You have grown from race to race and know the bike well now. How is the R1?

“I have more confidence with the Yamaha now. In the next tests at Jerez and Portimao we'll also have a new engine. They have worked hard on the engine back at base, and we won't be particularly penalised when it comes to the regulation's maximum rev limit. The key to development will see the whole team working on two precise areas, or rather the engine and electronics management”.

In 2017 the team Kawasaki team dominated from start to finish…

“Rea and Sykes were quick and consistent at all tracks, often unbeatable. The Ducati were also always strong, but last year Rea was on another level. To be at that level, we'll have to work hard right from the first test, looking carefully at every detail. We'd need to be perfect to beat Rea”. 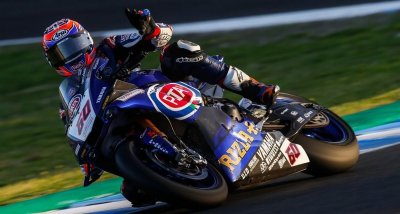 Last year you also rode the MotoGP bike on two occasions, how was that?

“I really liked the MotoGP, an amazing experience for me.  The Tech3 Yamaha was fast and relatively simple to ride. The M1's delivery was smooth and at the same time shattering, it discharges a lot of power to the ground, at the back wheel but this didn't bother me as the bike's behaviour was soft and predictable”.

“I'm really sorry about what happened to Jonas, and I'm sorry for team Tech3 too. It's not easy to find a replacement rider at this point of the season because all the contracts are already signed. I've spoken to Herve, but I have to respect my contract, which is clear. My 2018 season sees me riding in Superbike with the Pata team's R1. I won't push Poncharal to take me in MotoGP, and I will respect the contract I signed two years ago”.

“My main goal for now is to start fighting for the podium and try to win with the R1 in Superbike. I've really grown and can improve further. I hope to achieve my target and stay in Yamaha, whether in SBK or MotoGP, the important think is to make that step up in quality and be ready for any change”.

Dorna signed from 2022 to 2026. The Ricardo Tormo circuit will alternate with the others on the Iberian peninsula but will remain the last race of...
6 days 12 hours ago

Englishman suffered a fracture and dislocation of the right shoulder. The British rider suffered an injury during a fall at this week’s private test...
2 weeks 8 hours ago