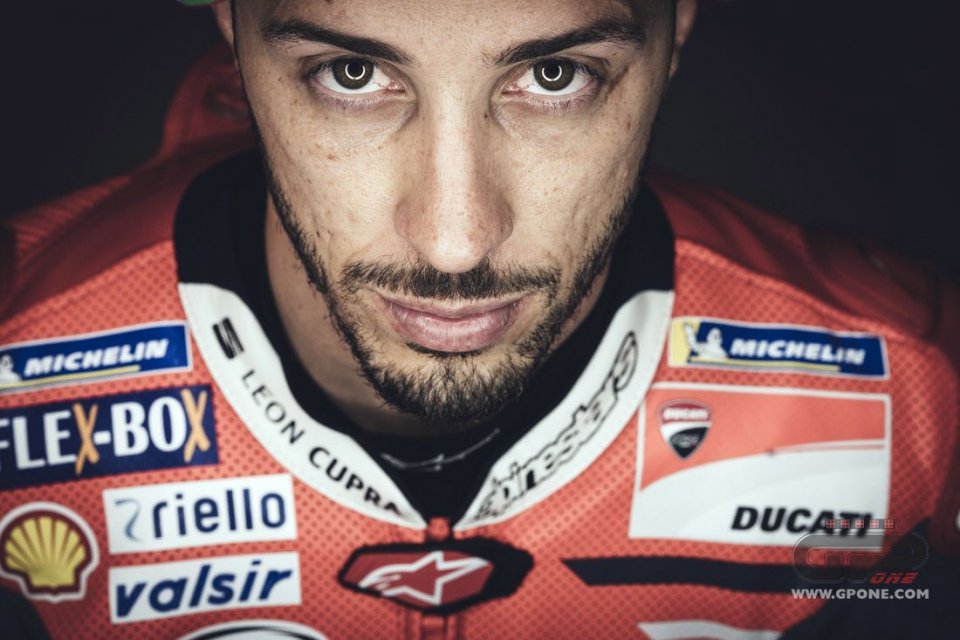 We left Dovizioso defeated but pleased at Valencia, after a season in which he was able to fight Marquez right to the last race. We return to him in Borgo Panigale, alongside the Ducati GP18 (its colours at least, because the actual bike won't be seen until the tests, the one unveiled today was in fact the 2017 model) and he still has a smile on his face.

“It's easy to enjoy the winter after a season like last year's - he jokes- I've been able to do some charity races, events that I like to participate in and also spend some days in the sun with friends”.

Now it's time to start again and this time you're one of the favourites, a new sensation in MotoGP…
“A great sensation, one I'd lost in recent years. In this situation, I feel at ease, I'm not nervous, not was I last year while fighting for the title. Throughout my career, right from my mini bike days, I was always used to running at the front and now I feel like I'm in the right place”.

Some might say it was just a flash in the pan…
“That's not true, last year didn't come without constant effort. Those results were down to hard word, we know why we were fast and I'm not worried about being able to do it again".

You seem immune to criticism.
“I've realised that I need to worry less about certain things. I know I won in a different way to the others last year and my life is different too, more normal, while in sport nowadays there are so many superstars. I didn't decide this, the thing that limited me for many years has now become a strength. It's nice”.

Is the title the only goal?
“I'm definitely among the contenders, but I know who my rivals are, both in terms of riders and bikes. In the last three years the level of competition has really increased, there are many riders who can win a race, it wasn't like that in the past”.

So?
“it all becomes more complicated, to fight for the title you need to be at least top five in every race, if not on the podium. Last year we lost the title because at the tracks we struggled I finished 7th or 8th, Marquez never did that”.

The Desmosedici needs improvement.
“The limits are clear, our speed mid-turn being the main one, one we've struggled with for years. Last year we were talking about the title at this presentation without the kind of results that then came, today we're more aware, better prepared. But we need to keep our feet on the ground”.

To what extent can you still grow?
“If there's one thing I learned last year it's that no-one has limits, I was wrong to think so. Now I know anything is possible, but this doesn't mean I'll win every race (he laughs)”.

Perhaps more than the 6 of last season, what does winning with Ducati mean?
“It's motivating because few have been able to do so, and they bend over backwards in Ducati to compete against the Japanese giants. Winning with the Ducati is different, first you need to get to know it, understand it. Many have come with real drive only to run away”.

You have DesmoDovi on your leathers, but you're already at the centre of market gossip…
“This will be an important year in this sense, perhaps even more than 2015. There are some particular circumstances, Marquez might decide to leave Honda and time is ticking for Valentino, sooner or later he'll stop, and then there's me, my valuation has changed”.

Do these thoughts worry you?
“they've crossed my mind but you have to manage the situation, I'm focused on winter testing and the first race in Qatar, I'm not thinking about anything else. I've not yet spoken with Ducati about the future, though I think we will do so soon”.

Do you think Lorenzo might cause you trouble this year?
“Up until now our relationship hasn't changed, we're each focused on our own work. I know Jorge well, I know how strong he is and I expect him to be able to fight for the championship. If he's more competitive, the situation might change".

Can we expect to see some 'tustling'?
“In the races why not but I hope we don't end up arguing. We need to be smart”.

Speaking of Jorge, he'll have the support of Debon while you are one of the only riders who doesn't have a coach…
“It's easy to generalise here, not all coaches do the same job. For example, I think Cadalora is unique, from a technical standpoint he has a particular eye and is doing a particular kind of work with Valentino. But no-one aside from Luca is able to do that, I can only think of one other. Then let's not forget that all riders are different and have different needs, what works for one might not work for another”.

A question about one of last year's 'hot potatoes': the tyres. What do you expect from Michelin?
"I hope they don't lost their characteristics. We were used to great stability with Bridgestone, the Michelins are different. It's not the tyre that changes from track to track, but the compounds and sometimes you can have as many as 5 different ones. This means that they have a restricted range of use, but there are many factors that play a part - air and track temperature, riding style, the bike. This means it's hard to find the right balance".

“Is the Honda difficult? All MotoGPs are. It depends on the rider. Tonight my head will work a lot, and tomorrow it’ll be better.”
5 hours 19 min ago

"We tried some small new things and I'm confident". Martin: "I have pain in my neck after yesterday's crash, but I'm happy with today's improvements"
19 hours 1 min ago