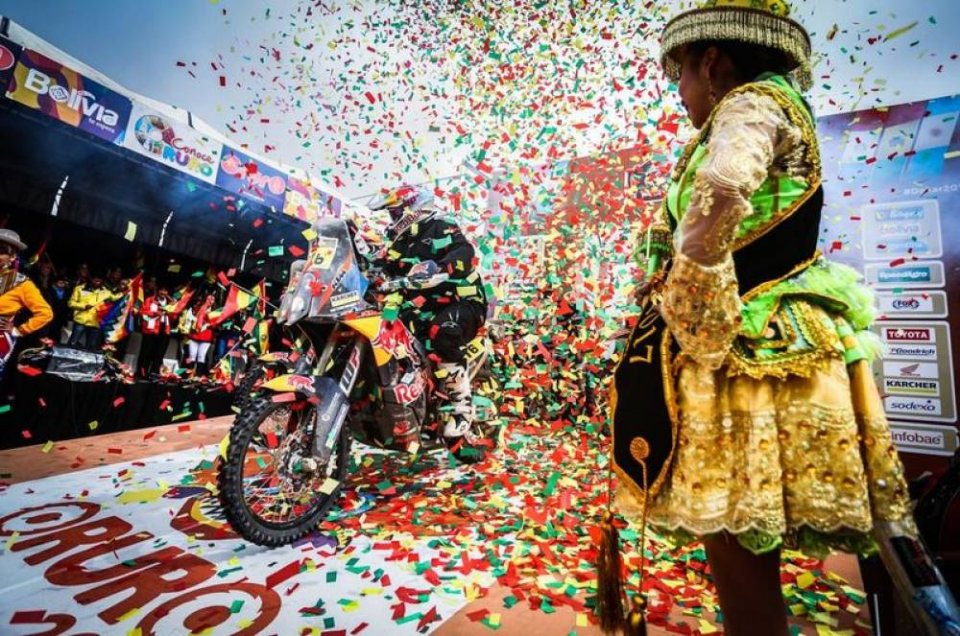 They refer to it as an odyssey and there's probably no better term to define one of the most thrilling yet dangerous and extreme races of all time. There are just four days to go before the Dakar kicks off on Saturday 6 January, starting from the Peruvian capital of Lima before concluding on Saturday 20 in Buenos Aires.

The 40th edition of the RAID will see 142 motorcyclists compete over the 9000 km route, one that leaves Perù and leads to Bolivia and an altitude of 4000 metres, before reaching Argentina, as is tradition. Attention will undoubtedly focus on the battle between KTM and Honda. Since 2001, the Austrian manufacturer has dominated every single edition of the RAID, with the latest win scored by Sam Sunderland, the first Brit to ever win the two-wheeled race.

The English rider is once again set to compete, riding the 450 Rally Replica with #1 on the front fairing. The KTM contingent also includes Toby Price, winner in 2016 and called upon to make up for the disappointment of the last edition, when his teammate Matthias Walkner and Spaniard Gerard Farres were forced to settle for second place. Stefan Svitko also adds his name to the group.

While the Mattighofen-based manufacturer dream of playing a starring role once more, Honda has no intention of watching from the sidelines. The last Dakar victory for the Japanese bike dates back to 1989 with Lalay, and so they are more than ready to break this fast. Joan Barreda is well aware of this, hungry for success after having finished fifth last year, hindered also by a one hour penalty. The Spaniard will also be able to count on teammates Paulo Goncalves, Michael Metge, Ricky Brabec and Kevin Benavides.

Aside from Honda and KTM, let's not forget Yamaha, where rider Adrien Van Beveren is keen to make up for having missed out on the 2016 podium by less than one minute. Alongside the Frenchman is fellow countryman Xavier De Soultrait. With the same bike, though not the factory version, Italian rider Alessandro Botturi, who takes part in the RAID for the sixth time. And then there is Husqvarna, with Pablo Quintanilla doing his best to fly the flag for the Swedish team. The field also includes Spanish rider Laia Sanz with the KTM.

The “Original by Motul" category deserves a particular mention, as this will see 28 riders carry out the race without any support. Hats off to them!

On Saturday the Dakar will get underway in Lima, GPOne will keep you updated with news, interviews and contributions throughout the course of the race.

VIDEO - The flames spread during a day of free practice, no harm to people or structures
4 days 3 hours ago

The reigning champion wins race 1 but ends up on the ground in race 2, giving the Suzuki rider his first career success. A 4th and 7th place with a...
4 days 9 hours ago

A non-stop week for the Ducati rider, beginning with the Misano tests, then a bike ride to Tavullia, and today on the Dorno track
5 days 3 hours ago

The collection will be up for auction August 15th and 16 in Bicester. The Morbidelli 250, with which Giacomo Agostini competed in Misano in 1976,...
6 days 8 hours ago

The SKY VR46 team rider injured himself training on the motocross bike: "I'm already going to the gym, soon I'll be back on the bike to check my...
1 week 4 hours ago