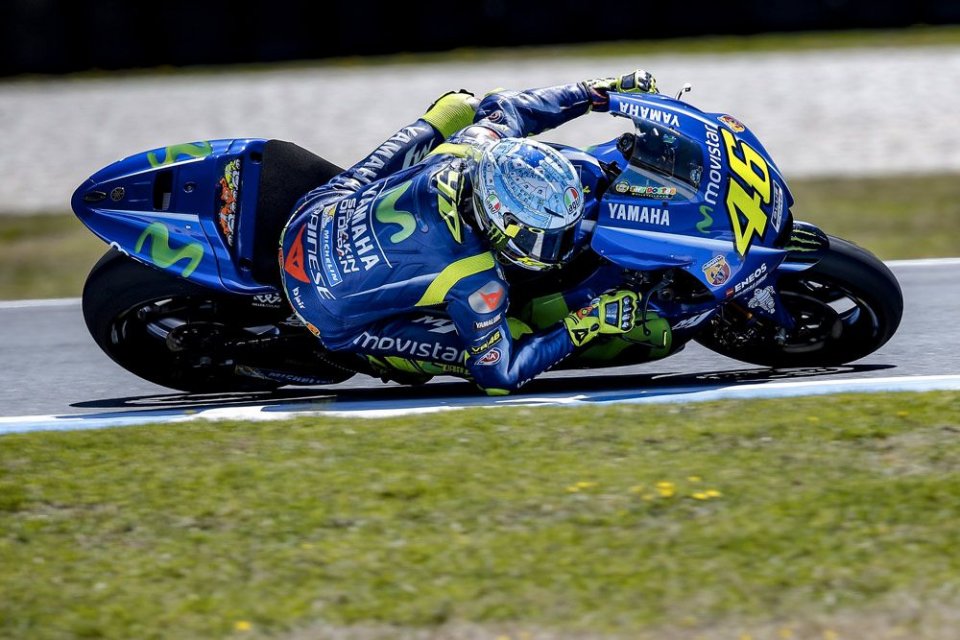 Valentino's start at Phillip Island was one to forget, the Doctor spent the morning battling with his M1, risking a crash at turn 2. “The front kept closing on me and I lost it, but it was turned out OK - he explains - I had no confidence in the front, the M1 is  a bit different”.

The lunch break saw things take a turn for the better though. “This track is unique, it's so easy to not quite enter the corner right and you lose a lot of time”, underlines the Doctor. In the end he closed in second, the only rider to come close to Marquez.

All's well that ends well…
“We made a bad start and I wasn't quick. I had no confidence with the M1 and was struggling with pace. Then during the break we analysed the data, the team worked work and we made changes to the bike. In the afternoon I was competitive, the pace wasn't bad either. In the end with new tyres I was able to make a god lap, the wind dropped and I could push, I'm 2nd with a good time but there's still a lot to do”.

Where in particular?
“Particularly race pace, we're suffering a little with the used tyres and need to work on that. Hopefully we are able to do that here”.

So that Marquez doesn't escape…
“Marquez has clearly been the quickest in terms of pace at all the tests, at Valencia, Sepang and now here. We have to work if we want to stick with him, I think he's the man to beat and the reference”.

What's the next step?
“I haven't yet fully understood how to best exploit the bike. Also, Marquez and the Honda are ahead in terms of pace right now”.

Is the new frame definitely better?
“I like it, but i haven't decided yet, over the next two days we'll make some more comparisons. That's the priority”.

Have you noted any improvements with the M1 since Sepang?
“In testing positions are not important, but rather the sensations. At Sepang I was really struggling physically but things didn't go too badly. Today we've taken less time, we're starting to have more experience with the bike and understand what's needed. It's positive because the bike seems to have great potential”.

Do you feel better physically?
“I only spent one week at home, so I'm not 100% yet. But I've been able to ride well, doing many laps, and I feel good. I hope I'm ready for Qatar”.

Tomorrow is your birthday, but also one year since Cadalora started working as your coach...
“The balance is very positive, I get on very well with Luca, both personally and professionally. At the start we took a bet, but it's important to have such an experienced person alongside you, and he'll be here again this year”.