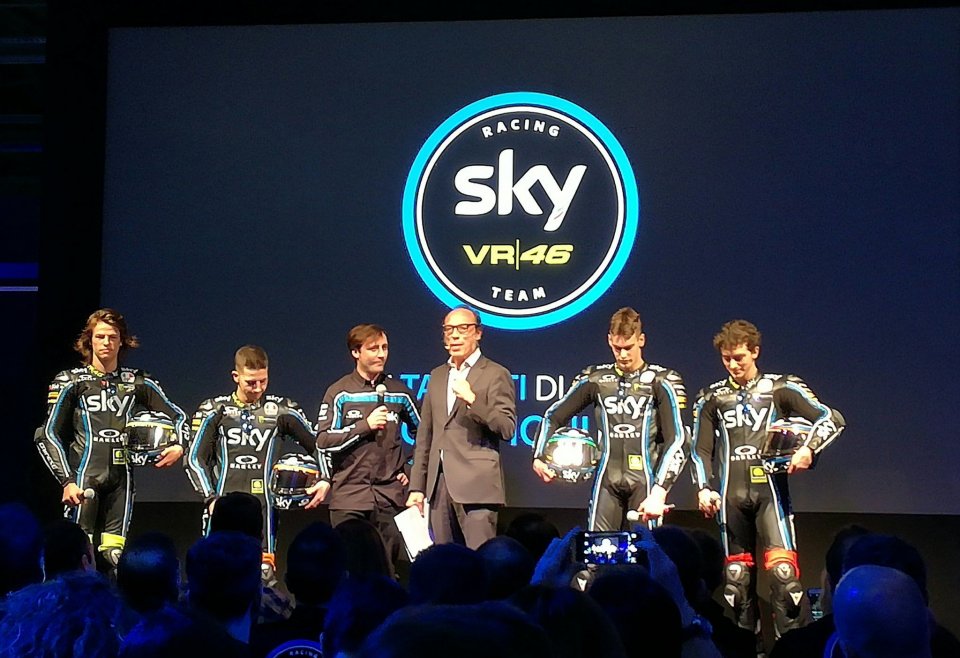 Moto2 and Moto3. The Sky Racing Team is doubling up. After having unveiled the 2017 livery during the final of the Italian edition of X-Factor, today saw the official presentation of the team. At Talent in Milano, Guido Meda welcomed onto the stage the four riders who will star in this upcoming season.

There was of course a special greeting from Valentino Rossi, who sent a video message wishing all of the young riders the best of luck. There are new elements, in the form of Stefano Manzi, but also returning riders, such as Pecco Bagnaia. The former Mahindra rider is excited about debuting in the intermediate class: “This is without doubt an important category, where the bikes are much faster which changes everything – revealed the Italian - I'm excited to be on this team. We're aware that there's a lot to do, but we'll work hard to reach the front positions”.

Alongside him is team-mate Stefano Manzi: “Of course there's excitement ahead of this new adventure, but I'm happy– he said – the Kalex is a different bike and I have to quickly get to grips with it. In addition, the races are longer and harder to manage. It will be a real  challenge for me”. It's a short hop from Moto2 to Moto3. The riders in the smallest category were also on stage at Talent in Milan today. Andrea Migno has prepared his season right down to the smallest detail: “Unfortunately the winter is long - he commented - so we have to work hard in the gym, it's like our second home. We prepare everything there”.

While Migno is practically a veteran in the category, Nicolo Bulega is in his second year of Moto3. In 2016 he just missed out on the Rookie of The Year title: “Unfortunately, one year ago I didn't have much experience and that had its weight – commented the rider – now I know the tracks better and this will be definitely be useful this season”.