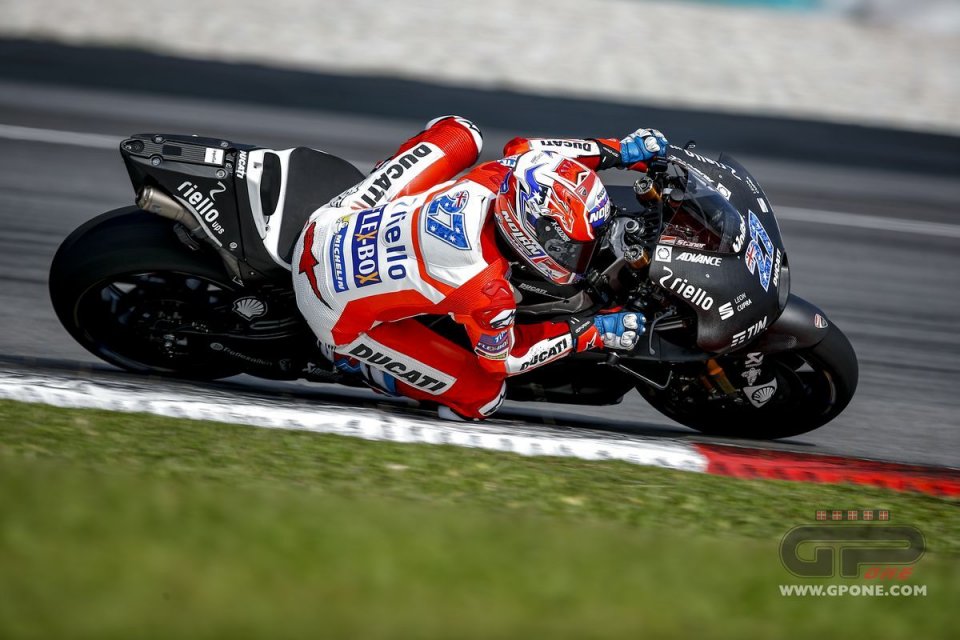 The season began yesterday for his former MotoGP rivals. For the likes of Rossi, Lorenzo, Marquez, Dovizioso, Pedrosa, Vinales, Iannone, the curtain goes up on a new season, with the pressures but also the satisfaction that comes with fighting in a new world championship.
It’s all in the past for Casey Stoner who, after three days of largely unproductive testing due to the track conditions, was called back to work by Gigi Dall'Igna on Sunday, making use of the track for a brief time while those working on a Ducati video took a break and then again for the first ‘official’ day of the Malaysian test.

Contrary to what happened before his retirement in 2012, the footlights went out when the Australian two-time world champion climbed onto the GP17, turning the wheels of the Desmosedici on the tough (and permanently damp) asphalt of Sepang and then again when he set the best laptime yesterday.
He really is the Syd Barrett of MotoGP.
Shine on ‘Crazy' Stoner.

"Don’t read too much into it. There’s no need – confessed a laughing Stoner – I know the track, I adapt quickly to the braking points. And I don’t need to complete a lot of laps to be quick. It’s easy for me, it always has been. You don’t forget, it’s like riding a bike. Yes, my muscles object a little and there’s some aches and pains but in the end it’s all about just finding the right traction. There are those who try to be fast, and who lap and lap and lap to achieve that, I just go out and ride. Simple. Sure, I’m a little tired now – these bikes take a little getting used to".

You make it look easy. In reality, the other riders envy this ability of yours to be incredibly fast right from the first laps. In 1985 Freddie Spencer explained it by saying that for him speed didn’t exist and that when he rode, the world around him moved in slow motion.

"Um, yes, up to a point. I wouldn’t talk about slow motion, or at least not with these bikes. But when things are working, and there’s grip and the bike is behaving well, exactly as you like it, and you’re physically in shape, I’d say that it’s possible to have it all under control. In front of the game, let’s say. A step ahead…. Sure, these bikes are so fast that at first it’s like driving a kart after not doing so for a long time – at first your brain is always three corners behind. It takes a little time to get used to it. Then it all become fluid and natural. The next step, finding the limit, takes a little more effort. You feel more tense, your body is more tense, then finally you relax, you do what you know and the time arrives".

What do you feel, in that moment? Is it an adrenaline rush?

"The MotoGP doesn’t give me an adrenaline rush and hasn’t for many years. This is my job now, I don’t have to be excited. If you ride and have that kind of feeling, like I said, it means that you don’t have the situation under control, you’re not a step ahead. The riders, or at least in my case, I raced for glory. This is why you race, this is what pushes you on, makes you ride on the limit, while adrenaline for me has more to do with fear".

Do you every regret retiring after just two titles?

"I’ve never regretted it. Never, not even for a second. Each year I’m happier than the last".

"As a test rider, I don’t have to be so prepared, so ready, every day of the week, of the month, of the year, like you do to win a Grand Prix. That is a full-time commitment.  Nonstop. And it’s your whole life. Now I’m free for long periods of time. It’s true that I’m back, I’m still part of a team but with a different role. It’s very interesting for me, but it’s a job".

What did you think when you heard Nico Rosberg was retiring? It’s a bit like your story...

"A little perhaps, but I had already won my two world titles, which I’m very proud of. I didn’t retire after finally achieving my goal. I don’t know the exact reasons why Nico made this decision and I haven’t really thought about it either. It must have been a tough decision to make of course, coming after such a result, but F1 is tough, there’s enormous pressure, all day and day after day, without time to take a breath. With no break. It was like that for me too. Maybe this is why Rosberg started thinking about other aspects of his life, to do something different, something more important. I fully respect him, it’s a huge decision to take. One of the top guns of F1 has now opened the door to others…we’ll see what happens".

A point-blank question now: who will retire first do you think, Usain Bolt or Valentino Rossi.

"I would like my answer to be off the record, but I think Bolt will retire first. I don’t think Valentino will retire any time soon, but I might be wrong".

Why does one stop?

"Personally I didn’t suffer from any pressure from other people, what others say or think has never bothered me. And I’ve always liked the fact that the fans continue to ask me to come back and race, that fills me with pride. But my role has changed now and I live a different life. I retired for my own reasons and situation, not because someone pushed me to do so or because I felt old or slow. Not because of the crashes either".

At a certain point of their lives, champions seem to want to pass their DNA on to the youngsters. Rossi is doing so and now Max Biaggi too.

"A school? Not in Australia, the costs would be insane, the motorcycle industry is very small over there. Europe has many talented riders, even more now that flat track has come onto the scene here, but in Australia it’s an effort to produce even just a couple of good riders".

There’s been mention of you as coach to Lorenzo and Dovizioso.

"It’s possible in the future, but currently I don’t think Jorge and Andrea need a coach, perhaps it just takes a different point of view, outside of the riders and engineers. My point of view. And that’s what I’m trying to provide".

Is it harder this year than last year?

"This year it’s easier. Last year, the bike, tyres and team were all new to me. Now I know what to expect, even if the tyres are still an unknown because they are very different to those I tested last time, six months ago, at the Red Bull Ring. They’ve undergone significant development, and now, generally speaking, they’re a little easier".

"Which bikes? The current bikes or the Ducati 800 I won the title with in 2007? Because that one and the GP17 are not even relatives: that one was very difficult to ride, it didn’t turn through the corners, it would move and wouldn’t accelerate. Today’s bikes are easier but… they have a power…. they are animals. When you open the gas the thrust is incredible. The hardest thing is to find traction, but that’s also the thing I like best. With respect to the GP16, the GP17 has taken steps forward in all areas, the frame, a softer engine, with the wings there was more weight at the front, now we’re trying new suspension springs to regain the balance. And the track is terrible, dirty, damp in patches. Changing direction without the wings is easier but the bike wheelies more. We just need a little more time and more data to confirm certain impressions".

Is this why you’ll continue to test?

"Yes, I’ll be back on the bike during the official tests".

"That’s what everyone is chasing. If you settle for a podium, you won’t win. It takes the right attitude to do it, and I think we have that chance. It’s difficult to predict a season, unless one person is ridiculously fast right from the start and the others give up. You can have a slow start to the season and then a much better final phase or vice versa. In any case, the championship is long; we just have to put every piece of the puzzle in the right place".

You continue as test rider but have stopped racing cars.

"In 2013 I didn’t want to do anything, but there were sponsors at stake when the opportunity to race with the V8s came about. It was a minor championship, just seven weekends of racing a year, but the person who organised it, a friend, unfortunately passed away and I unexpectedly found myself at the centre of the series. That’s not what I’d wanted. They didn’t take advantage, that’s not the right word, but I just wanted to race for fun, nothing more".

"I’m fifteen minutes from where I was before. I’d bought the house (1114 square metres, 4.5 million Euro, on the Gold Coast, editor’s note.) as an investment, but I needed more space, now I have 4.5 acres".

Is it just a myth or is true that you breed cattle?

"I have several thousand acres for them, but it’s just business: my cousin takes care of it".