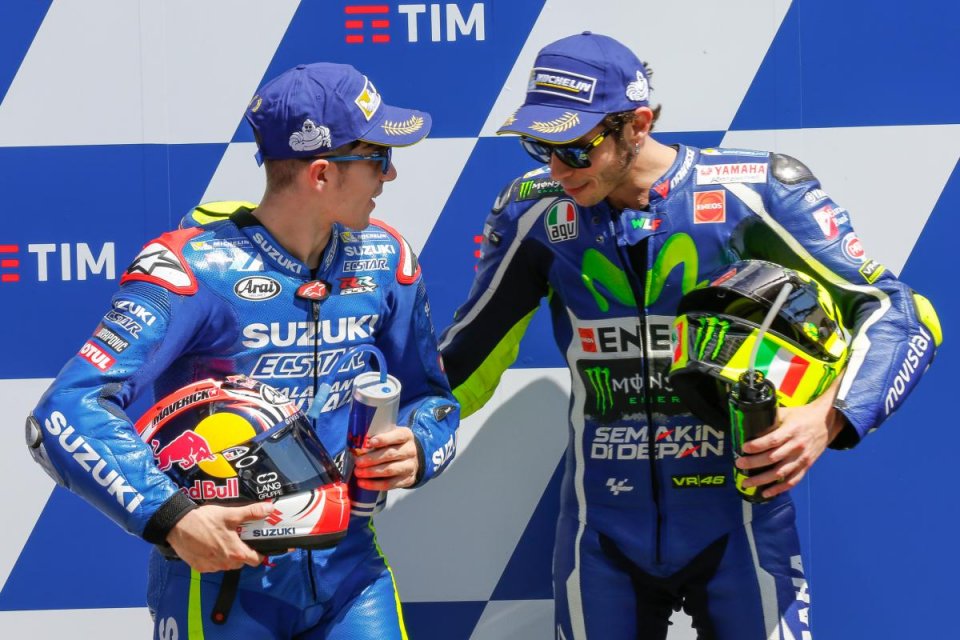 There are two questions still needing answers, answers that we'll have in just over two weeks' time, at the Sepang MotoGP test.
The first, of course, regards the competitiveness of the new Lorenzo-Ducati pairing; the second related to Valentino Rossi's new team-mate, Maverick Vinales.

Vale has always tried to tried to live up to the role of pack-leader with his team-mates, so much so that in 15 seasons of MotoGP only on three occasions has Rossi's team-mate managed to do better than him. And this was always Jorge Lorenzo.
Over his twenty-year career, Valentino Rossi has had all sorts of team-mates. And while he had no choice in the matter when, early on, Aprilia gave him Tetsuya Harada and Loris Capirossi in 250, from his 500 debut onwards he's been a lot more fortunate. 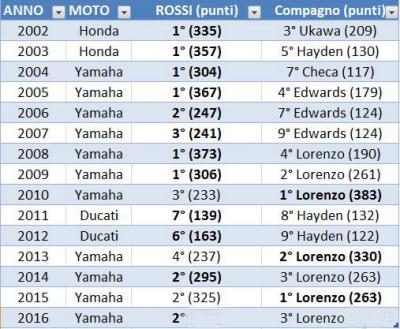 In 2000, his debut season, he had a team to himself. Then, in rapid succession, came test rider, Tohru Ukawa and then the still unknown American rider Nicky Hayden.

The Japanese rider was never a problem for him. Vale did well. Only once did it go badly, in 2002, in South Africa. While Rossi was having fun on his Honda RC211V, Tohru took advantage and won.

No problems with Hayden either, not even when he moved to Yamaha to have him as an adversary, losing the world title to him in 2006.

The best years were undoubtedly his first with Yamaha. Those with Carlos Checa and then Colin Edwards.
He formed a close friendship with the two-time Superbike champion, one that still lives on today.

When the Texas Tornado found himself alongside the still young Valentino, he understood immediately and was, to all effect, a second rider. He admired him in a way we rarely see between champions and Rossi reciprocated in 2000, vetoing the arrival of Casey Stoner who would instead go to Honda with the LCR team and from there to Ducati. And finished, as we all know, with a world title.

The animosity with the Australian started there.
But it was soon time for the arrival of a tricky team-mate, the first: Jorge Lorenzo.

On his arrival, in 2008, the Majorcan had second rider status: he didn't have exactly the same material as his team-mate but that didn't prevent him from winning in Portugal and collecting a further five podiums.

It was like this, also due to their differing tyre choice – Rossi went with the Bridgestones while Lorenzo stuck with the Michelins – that a wall was put up, separating them in the garage.

Relations didn't improve, the Spaniard earned technical parity, and after Jorge scored his first title in 2010, Vale made the move to Ducati, and back to Hayden.

The rest is recent history. Having returned to Yamaha, relations with Lorenzo improved, but the two were barely civil to each other and at the end of 2016, their paths separated once again, with Jorge moving to Ducati.
Taking his place in Yamaha is Maverick Vinales, who won the British Grand Prix last year with Suzuki,
"I' really pleased with the choice we've made – said Yamaha boss, Lin Jarvis, on the day of the contract accouncement - of course, when you lose a world champion like Jorge Lorenzo, it's difficult to find a replacement. We had two options, an expert rider or a youngster. Of course the expert was Pedrosa, the youngster  Vinales, who was actually always our first choice".
After Vinales' first win, it seems that Jarvis, as with Lorenzo, had been proved right once more - Maverick is a winner. But how has Rossi taken to having a 21-year old alongside him?

"Vale has respected our decision but played no part in it. Of course, we have to safeguard Yamaha's future", explained the English manager.

"Maverick is tough– Valentino admitted recently - and can still improve a great deal. I'm a little worked because he's another strong team-mate, he's 21 and will only improve. I'm also pleased though as we'll have a strong team, I have experience, he's young and we're both good rider. This move had proved negative for Suzuki, but very positive for Yamaha".

Vale and Maverick are getting on, for now. He is not an extrovert like Marquez, he's more reserved but not as closed off as Lorenzo. It could prove to be a good combination.

The only worrying thing is Lin Jarvis' confession about the reasons for his move to Yamaha.

"He's not here to become a star or for the money, he just want to become world champion, to be the best. And that is what convinced us".
The Spaniard himself added: "I chose Yamaha because being alongside Valentino is a unique opportunity for a young rider to learn from the best".

How long will it be before the honeymoon is forgotten and the bitterness sets in?

“Since Austria I’m not able to be fast on the straight. I couldn’t keep up with Bagnaia today. The first round? Pol slowed down, and I touched him. I...
2 days 9 hours ago

"The weekend started in the right way; in the race I was able to push while managing the tyres." Di Giannantonio: "This podium is a great boost for...
4 days 39 min ago

“There’s no grip and it’s impossible to be aggressive. Getting ahead of the Yamahas at the start will be essential, as will not overheating the tires...
4 days 20 hours ago