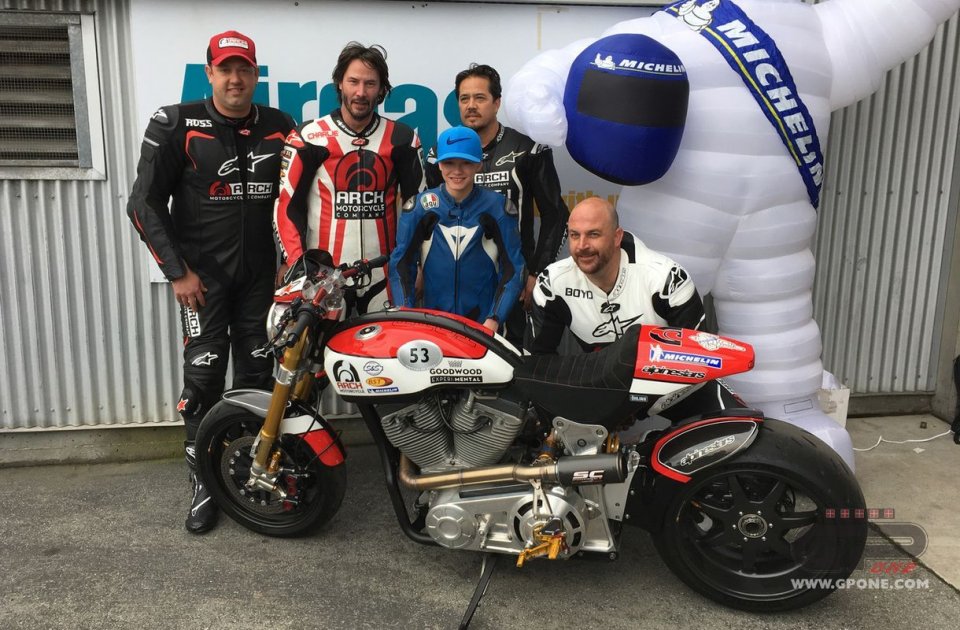 After first meeting at the Austin MotoGP last April, Arch Motorcycle founders Keanu Reeves and Gard Hollinger have offered support to assist the 12 years old Damian Jigalov and his family as they prepare to tackle the Italian CIV Championship with team RMU.

Keanu and Gard are both are heavily embedded in the motorcycling community and have attended several MotoGP and WSBK races in the past couple of years and were immediately drawn to the youngster, hoping he can follow in the footsteps of American greats such as Kenny Roberts, Kevin Schwantz and more recently Nicky Hayden and Ben Spies.

Damian joined the Arch Motorcycle family at a track day at Laguna Seca at the end of last year and impressed all in attendance. Damian will carry an Arch Motorcycles logo on his Dainese leathers for the 2017 season.

This first round of the CIV Pre Moto3 Championship will take place in Imola on 22 and 23 April.

“Damian and his family were introduced to us in Austin last year and told us about their plans and both Keanu and I wanted to help - said Gard Hollinger - They’re a great family and Damian is surrounded by the right team to help him grow. All of us here at Arch are excited to be a part of this family and welcome him into ours! We hope to help him continue to grow and eventually reach the World Championships and fingers crossed we’ll have an American Champion in MotoGP in a few years! Good luck Damian!”

"I’m so grateful to Keanu, Gard and all the people at Arch - replied Damian Jigalov - They’ve welcomed me into their family and I was lucky enough to ride some pretty special bikes with them at Laguna Seca at the end of 2016. I hope they can make it to a few of my races this year, I will keep working hard and hope to come back with a Championship!”

This is the first time there have been two or more rookies on pole position in a single premier class season since 2006 with Dani Pedrosa, Chris...
22 hours 51 min ago