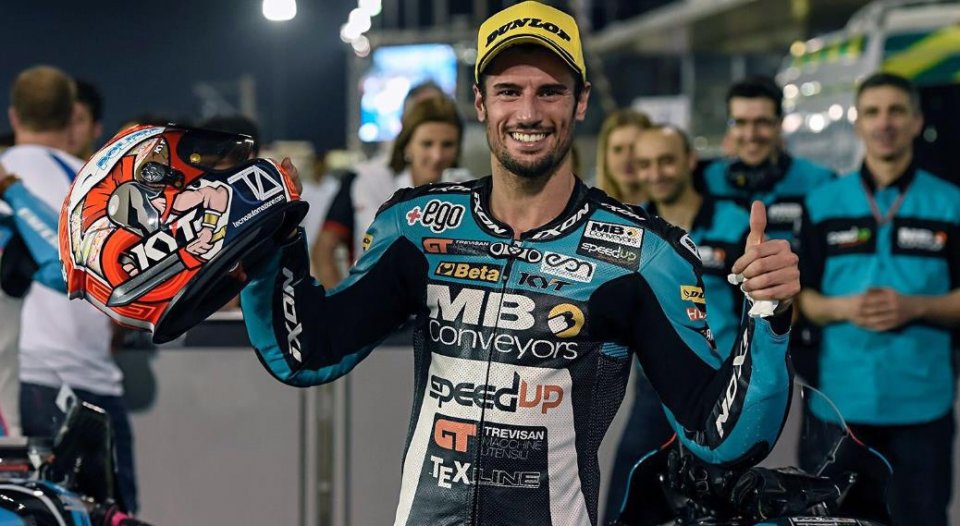 The 2016 Moto2 season started very well for Simone Corsi, with a fantastic third place obtained during the night at Doha, in Qatar. At round five, the Roman rider was again able to put his Speed Up bike, with Honda CBR engine, on the podium, scoring second place in France, behind Catalan rider Alex Rins, just missing out on the win by a few metres.

The rider proved to be less competitive throughout the rest of the season, and he himself admits that he expected more from his championship but it didn't all go to plan: “the first part of the season went quite well, except for the race in Argentina - recounts Simone- where we were a little unlucky. The first five races were promising but in the second part of the season we weren't able to repeat those initial results. At a test in Austria we got a new frame which seemed better than the one I was used to, but then race after race I lost feeling and ended the season well below my expectations and those of the team”.

We only see Kalex up at the sharp end - are you at a disadvantage riding one of the few Speed Ups?

“Kalex, having supplied a number of riders for many season, obviously has a great deal of data that it has collated up until now. If Speed Up also had more fast riders, development would move forward better. But there is also an advantage - being one of the few to race with the Speed Up, new material definitely comes to me. So it depends on how you view the situation”.

Moto2 is a unique category, what does it take to win?

“You need to be very consistent to be up front in Moto2. The technical base of the bike must be solid and the rider must adapt to the bike. The Dunlops are the same for everyone, as is the Honda engine, the suspension suppliers are limited to White Power and Ohlins… so basically, those racing in Moto2 have to adapt, particularly in terms of frame and suspension set-up. With the Speed Up, tyre consumpion is less aggressive than with the Kalex and, at certain tracks, we had a slight advantage. There are 10 Moto2 tests in total throughout the year and the key is to build a bike to fit you”.

Coming from two-stroke 125 and 250 bikes, Simone is still developing his style: “I train with my MX bike and also do supermotard to change my style and continue to improve. It's not easy to change, because with the Moto2 you need to be a little 'dirty', with your body out and the bike that tends to move to the inside”.

Next year Corsi will be on the same Speed Up team and will have Axel Bassani as a team-mate, who comes Supersport. The Roman rider's goal, considering the his 5 wins and 21 podiums obtained until now in the world championship, is clear: “it's true that riders like Zarco, Lowes, Rins and Folger have moved to MotoGP, but guys like Luthi, Baldassarri, Morbidelli and others will be up front. In Moto2 there are always new names. I want to race to be up front, I haven't been on the top step of the rostrum for a long while. At Le Mans last year I came close and... my aim is to get back to winning, but I'd also be happy to be in the top five overall”. 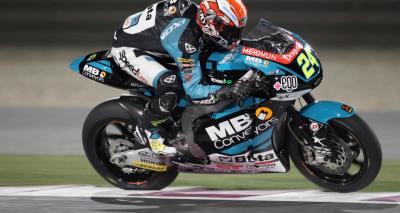 Together with Pirro and Petrucci, Simone Corsi represents the Italian State olice in the world championship: “Enea, Michele, Danilo and I bear the name of the Fiamme Oro and State Police on track, but we don't have a proper team. Compared to other sports, motorcycling is more expensive and difficult to sustain. We often train with our trainer Paolo Blora who, thanks also to his race experience, helps us in every situation, he comes to race and offers all kinds of advice. To be a policeman is a great thing and I am honoured to have this role”.

Simone is a very disciplined young man and follows the rules even on track: “in terms of discipline, I already followed the rules and, as a policeman, I do the right thing, also in terms of my behaviour. This comes down to my personal morals, yes, but my role also plays a part”.

As a professional rider-policeman, what advice would you give young people who ride bikes?

“Me and my colleagues are lucky - riding on track and being paid to do so is a privilege that not everyone gets to experience. I, for example, have an A licence but I don't use bikes on the open road. Today you can buy bikes with more than 200 hp, real rockets. Those who can do so, do well to use their bike on track, while those who don't have the chance must ride on the road in a responsible way, respecting others and also themselves. A full-face helmet, contained speed and respecting the rules are all fundamental in order to enjoy the bike freely and stay away from danger”.

Motorcyclists and motorcycling have always been in the eye of the storm, Simone didn't like the recent happenings in Barcelona and the stadium fans and he hopes for a trouble and conflict-free 2017i: “bikes, or the sport of motorcycling, is dangerous and we all know this. Over the years, the world championship has significantly improved its safety standards and I think that the tracks will continue to become safer. In terms of sport, rivalry between competitors is a good thing in any discipline, but it's never good to see and hear booing and insults against those who race and risk their life. The fans of any rider should also respect the other riders, especially when they win - the guy on the top step of the rostrum is not there by chance but because he deserved to be”.