Best rookie of the year, 6th place overall at the end of the championship, 3 podiums, 2 pole positions, 4 fastest laps in the race and, thanks to these results, Tech3 won the title for best independent team of the season. These are the stats regarding Johann Zarco, a revelation in the 2017 MotoGP championship and a rider who, despite two Moto2 titles, did not have everyone convinced.

Suzuki, after having signed him up, let him get away, allowing Hervé Poncharal, team manager of the French Tech3 squad, to snap him upe.

Hervé, are you the best MotoGP manager or just the luckiest?
“You should never think you're the best, so I'd say I'm the luckiest (he laughs)”. 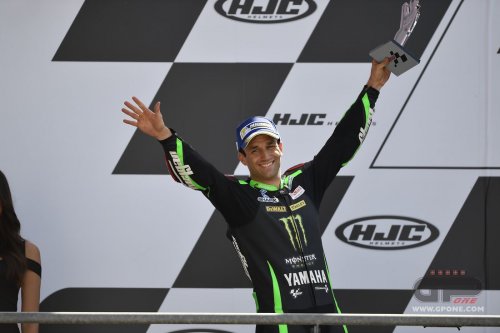 When you signed Zarco did you expect this kind of performance?
“He's surprised me too, though I did expect good results from him. What he did in Moto2 was incredible, he had shown himself to be an aggressive and intelligent rider”.

But…
“You never know when a rider changes category. Some need more time to adapt, like with Rabat, others do so immediately, like Marquez”.

Zarco belongs to the second category.
“In the first tests at Valencia he was immediately quick, he adapted easily to the MotoGP and was smart, understanding what was needed to ride these bikes. But there's a big difference between a fast lap in practice and the race itself".

You weren't yet convinced?
“We'd completed some race simulations during winter testing, then in Qatar he led for 7 laps before crashing. It was important to show he could run at the front, but that's a unique race, where the track is always in a difficult condition and where top riders often don't push to the max, preferring to bring home points”.

What did Johann say when he got back to the garage?
“That he wasn't being crazy, and that he'd made a small mistake but I didn't really believe him (he laughs). He promised me there would be other chances to run at the front and that we shouldn't be upset”.

He was right.
“In Argentina he closed 5th, as he did in Texas where he battled with Valentino, at Jerez he was in front. I began to realise how special this guy really is. He's not crazy and he's not stupid either. Many said that when he chose softer tyres than everyone else he was taking a gamble, but it was never like that. When he made that decision it's because we know that he could run the whole race, he and Guy (Coulon, his crew chief) had worked with those tyres in practice. And Zarco has often had the balls to speak up to the Michelin guys in support of his decision”.

Thanks to you.
“I've tried to make him feel at home, part of a family in which there are people who believe in him, this is an important aspect. I'm proud to have been able to do that and to have put him in a position to be able to give it his all. YOu sometimes forget that riders are also people, even at the level of Valentino and Marquez, and in fact Marc often points out how important the team is to him”. 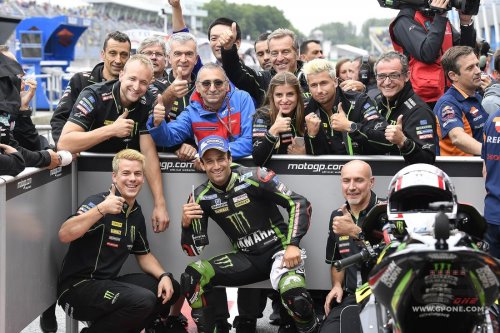 it's all about teamwork.
“Spending time together means you get to know each other better, from a personal point of view and this then reflects on the work. There is little time and a lot of pressure during practice sessions and with Johann we can quickly understand each other. Communication is important and as soon as he gets off the bike, he knows exactly what indications to give us in order to improve”.

You almost speak as a father.
“Like I've said, I like everyone to feel part of the family. A team is like a chain in which every link is important, if one breaks it all falls apart."

We often forget that he didn't have a factory bike…
“When you're in a factory team, you always have many things to test, you have to focus on many things. Our M1 doesn't have evolutions, so we can focus on tyres and this makes the work easier in some ways. In a factory team, there's a risk of getting confused”.

At one point, people were saying that Zarco was going stronger than Valentino and Vinales because his bike was better.
“When you work in close contact with a rider, you stand up for him and I think that certain comments, from the media and other riders, are not right regarding Johann. I have great respect for Valentino, Maverick and Yamaha, I want to underline that. Their engineers are not stupid - how many titles and races have they won?”.

So the 2016 M1 was not better than the 2017 bike?
“If that was the case, they would have immediately gone back to it. I don't know who made mistakes, but there was a lack of respect when it came to Zarco's results. It makes me laugh when I hear people say our package was better. We don't have a factory bike, I don't just mean the frame, but the engine, suspension and aerodynamics. At Valencia the factory riders decided to go back to the 2016 frame and we saw the results, if it had been better they should have been quicker than Johann”.

Who tested the 2017 M1 at Valencia.
“And he told me that he thinks it's better than the bike he used this season. I'd advised him to have no preconceptions and to not be influenced by what he'd heard, he needed to be objective. He continued to use it in testing at Sepang”.

What will he be using in late January?
“The 2017 bike again, Yamaha has been clear and correct with us, they've told us that we will be able to choose among the various frame evolutions but we won't have the 2018 bike. Zarco will not be treated like Crutchlow is in Honda or Petrucci in Ducati, to cite two examples”.

Are you disappointed?
“I've always been pleased with the support Yamaha has given us over the years. If I look at the podiums and pole positions achieved this season, I cannot complain”.

Perhaps Zarco hoped for more…
“as I've said, always having new material to test is not always an advantage. I also know a rider is happy when a company puts its trust in him and gives him parts to test. If Yamaha wants to involve us in development we'd be pleased, but we understand that we can't have a factory bike and we accept that. I've worked with Yamaha for 20 years and trust them”.

But Zarco will be a key rider on the market, Yamaha will have to fight to keep him.
“Before we get to the point of reconfirming Johann, some important details need to be worked out”.

Such as?
“There's been a lot of talk lately about Valentino possibly having a team in MotoGP, if this were to happen there may not be room for Tech3 with Yamaha, considering that it would be difficult for them to have 6 bikes. I'm not stupid and know how things work, just as I understand that Rossi would be the priority. He is an incredible magnet for sponsors and is a very important figure here”.

Are you worried?
“I just think that a long-term relationship like the one between Tech3 and Yamaha is not easy to build but right now I'm not sure if the team will be able to stay with Yamaha”.

When will you know?
“I asked Tsuji (general manager of Yamaha) if we can speak as soon as possible about the future, both for the riders but particularly for my team. First I will have to see whether we can have the M1s for 2019 and 2020, then I can speak to the riders and sponsors”. 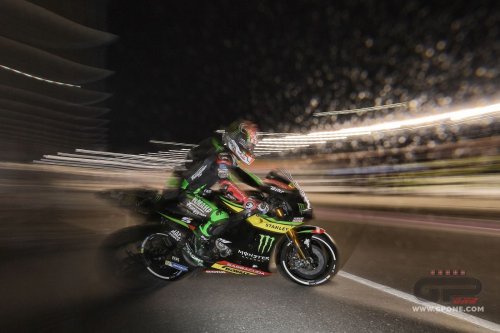 Would you like to keep Zarco?
“I would like to, but it's a dream. Our team has a budget that is significantly smaller than the salary of just one of the best four or five riders in MotoGP. Logically, Johann will want more money, but he'll also want full factory support”.

You don't seem to have many cards to play…
“I'm ready to see him go and I'm proud that he debuted with us in MotoGP. Satellite teams have their limits of course, in terms of both the salaries and technical support they can offer”.

What's the alternative?
“Many speak about us as a Junior Team, but we're not really. I'm free in terms of picking the riders and very rarely has one of my riders gone on to the Yamaha factory team. Becoming a real Junior Team is perhaps something we could talk about”.

To find another Zarco.
“A few years ago we would have had more chance of keeping him, you either races for Yamaha or Honda, but now there are many manufacturers and so more opportunities. I don't think Johann will be with me in 2019”.

KTM's sports manager at the gates of 2020: "This is the highest point of engineering applied to motorcycling and has taught us to go beyond our limits"
1 day 9 hours ago

VIDEO - A challenge of reflexes between Red Bull Motorsport athletes, with Verstappen, Gasly, Albon and Kvyat who challenged Pol Espargarò
2 days 4 hours ago

"When things are not going well, you can feel the weight of the name on your shoulders. My goal for 2020? Improve myself"
6 days 21 hours ago

Englishman suffered a fracture and dislocation of the right shoulder. The British rider suffered an injury during a fall at this week’s private test at the Jerez-Angel Nieto circuit
1 week 6 hours ago

The story starts on the Isle of Man in 1949, Harris has been at the centre of the sport for decades, getting to know the riders as individuals
1 week 8 hours ago