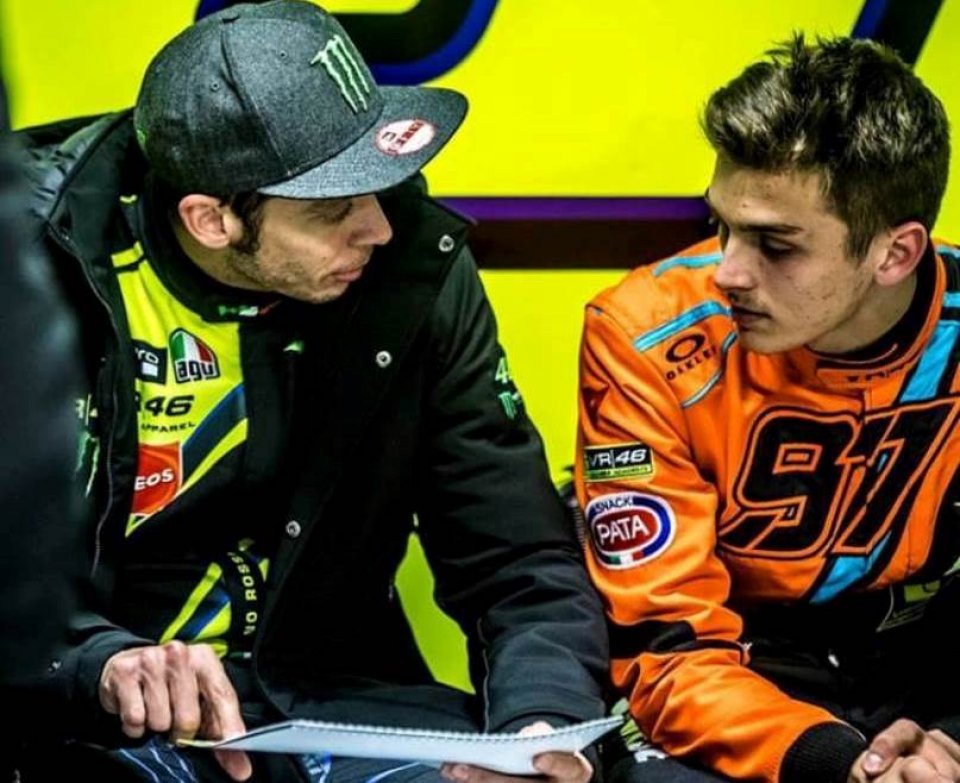 The 2017 edition of the Monza Rally Show saw Luca Marini make his debut. The Doctor's brother also took part in the event, taking the wheel of a Ford Fiesta R5. A chance to switch off from bikes and enjoy a weekend of four-wheeled fun like he'd never experienced before.

“I think it's been a very positive weekend– begins the rider -  I finished this rally with a great time and I'd like to come back again next year. Of course I'll need to speak with Vale – he jokes - but it would be great to use the R5 or even the WRC”.

In Sunday afternoon's Master Show, the rider had to cope with his car flipping over. Nothing serious though luckily.

“Once we'd finished the head to head, I wanted to do some drifting. But I was too slow coming into the turn, pulled the handbrake and touched the barrier with the rear tyre which caused the flip. Vale told me that real rally drivers always flip over for the first time during the Master Show (he jokes)”.

The jump from two to four wheels didn't seem to cause him too much of a problem anyway.

“You have to be very precise with these cars. You can really brake hard compared to the bikes”.

Some of the stages took place in the dark, which caused Luca some difficulty.

“I struggled during the night-time sessions. I couldn't see very well with the lights so I held something bike. Let's say it's not exactly like the night race in Qatar”.

On Wednesday, Luca experienced a shakedown sitting next to Valentino in the Fiesta WRC.

“I was really scared – he reveals with a smile - sitting next to him is much scarier than driving for myself”.

Speaking of his brother, he can't resist a joke about #46's future.

In the same category, Marini found himself up against Andrea Locatelli in the Monza Rally. In his second appearance at the event, Andrea finished almost five seconds ahead of Luca.

“We were fairly close Andrea and I – he underlines - I'm pleased, he was my point of reference at Monza”.

The Italian's mind is already on 2018, where he will begin his adventure with the Sky Racing Team VR46. He's already made an encouraging start of course, in that he was among the quickest during winter test sessions.

“I was immediately competitive, though I'm still unable to explain why (he jokes). I know the team members well and this is definitely an advantage. It's a pity about how the season finished, seeing as I felt strong early on in the year”.

As of next year, he will not race alongside Lorenzo Baldassari but rather Bagnaia.

“I get on well with Pecco, we have a great relationship. We might be able to help each other in races, but also in qualifying, seeing as it's important to start up front in Moto2”.

Among his rivals, Marini will have his eye on one in particular.

“Mir will surely be up front. He's proved to be the strongest in Moto3 and this will mean he has good awareness. And let's not forget that he'll be racing with the world championship winning team”.

Luca has clear ideas about his goals.

His mother never tires of watching his progress either.

“She continues to give me a lot of advice, she even followed the last tests in Spain and always wants to know everything”.

Chrissy Rouse sustained a significant head injury. He was stabilised and put in a medically induced coma at the medical centre by the BSB medical...
36 min 34 sec ago

This is the first time there have been two or more rookies on pole position in a single premier class season since 2006 with Dani Pedrosa, Chris...
23 hours 49 min ago