What a battle between Miguel Oliveira and Francesco Bagnaia on the second and final day of Moto2 testing at Jerez. While it was the Sky Racing Team VR46 rider who dominated yesterday, today it was the turn of the Portuguese rider. The KTM project is undoubtedly growing and Oliveira confirmed this, closing the session with a best of 1’41”518, improving by 0.060 of a second on the Italian's best time set yesterday.

Bagnaia thus settles for second place, just over a tenth from the front (+0.101), and 0.097 ahead of Alex Marquez. The Marc VDS rider, who will be on board the Honda MotoGP later this month, standing in for Tom Luthi, finishes ahead of Brad Binder (+0.258).

Aside from Bagnaia, other Italian to feature in the top ten include Mattia Pasini (+0.548), sixth ahead of Luca Marini. This was his debut in Sky colours and he has made an encouraging start, closing less than six tenths from the front (+0.597). The new team Pons rider, or rather Lorenzo Baldassarri, is two positions further back (+0.778). He will share a garage with Hector Barbera (14°, +1.080) next season, who completed 98 laps today. No-one else spent as long no track.

The Spaniard won't be the only rider moving from MotoGP to start over in Moto2, as the same applies to Sam Lowes. The former Aprilia rider closes Friday in eleventh place, a second from the front, while Andrea Locatelli is fifteenth (+1.207), with Joan Mir just 0.016 of a second behind him. The Spanish Moto3 champion showed his stuff, proving to be the quickest of the rookies and improving on his best of yesterday by a good half second.

Among the other Moto2 rookies is Romano Fenati (+1.670). The Italian improved on Thursday's time by eight tenths, closing in 23rd place ahead of Stefano Manzi, who has moved to Forward along with team-mate Eric Granado.

Moto 3 was also on track today and yesterday. Aron Canet did the double, proving to the quickest on both days, with a best of 1’46”175. Following behind him are Dennis Foggia and Tony Arbolino. Both classes will be back on track next week at Valencia. 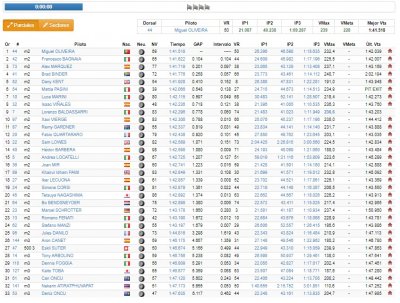 In a video on You Tube, the driver defended his reasons but confirms the end of his experience with Audi in the Formula E
3 days 4 hours ago

It was decided by the Board of Directors via video conference call. Previously the FIM-Dorna contract provided for a minimum of 13 Grand Prix. In F.1...
4 days 21 hours ago

An embarrassing moment for Audi Formula E driver Daniel Abt who, during the virtual race in Berlin, had an eSports professional race in his place:...
5 days 15 hours ago