The Valencia test finished a little ahead of time for Andrea Dovizioso, who completed just 22 laps today. “I tested everything we had brought, including one of the two new rear tyres for Michelin - he explains - So it didn't make sense to stay on track just for the sake of it. At the end of the seasons, batteries are drained and when you're not focused, you can find you go down the wrong path if you continue to test”.

Better to head back to Italy, recharge for a few days and then be ready for next week's Jerez test. A test that will help to shape the 2018 Desmosedici, also because the new components tested this week haven't had an effect on the red bike's character.

“I was fast yesterday, but that was more down to the fact that I was able to put into practice some things I'd learned during the race. Our limitation remains the same - to get the bike turning better without using the brakes. That's our priority, because we're still struggling at those tracks where we need to be smooth”.

And this is an area on which both Andrea and Lorenzo want to work. The engineers are also working on the engine, but this is not the Italian's priority.

“Did I expect more from these tests? Yes, that's normal. We'll have two more days next week though, with a lot of new material to test. We're defining the new bike, we're working on the details. In theory we shouldn't have been testing at Jerez but then the regulation changed…”.

Dovizioso also noticed the new Yamaha fairing, another proof, if any were needed, that the wings are back.

“I don't want to start anything, but I don't think anyone can justify what went on last year. They said they wanted to ban wings for safety reasons, but the current solutions are more dangerous, despite being perfectly permitted by the regulation. The fact is that the decision was made only as a way to limit Ducati, that had worked hard to develop the wings... the rest is bullshit”.

Speaking of the competition, Andrea has some nice words for Zarco.

“Johann is the real deal, Not just because he's been fighting for the podium in recent races but also because he rides well. From the outside, it looks like Yamaha is a little confused, but he has had the least problems. next year he'll have more experience and can only improve”. 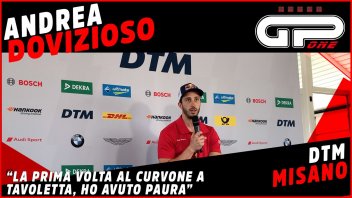 The Californian Yamaha rider took the flag alone ahead of teammate Gagne and Herrin, who beat the Ducati rider in a photo finish. Elias crashed out...
3 days 18 hours ago

Defending champion wins ahead of Scholtz and Gagne. 5th and 7th, Wyman's and Jacobsen's two best Ducatis. Elias stopped by a problem.
4 days 10 hours ago

The reigning champion started has started 2020 in the best possible way, heading his teammate Jake Gagne. Race 1 at 22:00 on Eurosport
5 days 7 hours ago