Marc Marquez has written another page in World Grand Prix Motorcycle Racing history. At just 24 years of age and 268 rounds, he has been crowned World Champion for the sixth time, becoming the youngest rider in the history of motorcycle racing to achieve six titles.

The triumph arrived on the Valencia track, where he won the 125 World Championship in 2010 and his first premier class title in 2013 ahead of Jorge Lorenzo. The Spanish rider’s 2017 season is one to be framed with six wins, four second place finishes and two third places for a total of twelve podiums. With today’s victory, he is on the top ten list of riders who have won the most world titles.

2008 was his rookie year in World Grand Prix Motorcycle racing at the Grand Prix of Portugal and in the same year he took the historic podium at Silverstone, whereas 2010 brought his first career win at Mugello. It has been a long path which led him to the benchmark today of being the only Spanish rider with six titles to his name. If last year’s season was defined as the championship of maturity, the 2017 triumph is, for all intents and purposes, one of determination. This was an essential ingredient in order to make the difference in the competition against Dovizioso, who did not give up down to the last. 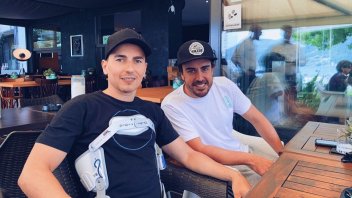 Defending champion wins ahead of Scholtz and Gagne. 5th and 7th, Wyman's and Jacobsen's two best Ducatis. Elias stopped by a problem.
9 hours 25 min ago

The reigning champion started has started 2020 in the best possible way, heading his teammate Jake Gagne. Race 1 at 22:00 on Eurosport
1 day 7 hours ago

In a video on You Tube, the driver defended his reasons but confirms the end of his experience with Audi in the Formula E
4 days 17 hours ago

It was decided by the Board of Directors via video conference call. Previously the FIM-Dorna contract provided for a minimum of 13 Grand Prix. In F.1...
6 days 10 hours ago

An embarrassing moment for Audi Formula E driver Daniel Abt who, during the virtual race in Berlin, had an eSports professional race in his place:...
1 week 4 hours ago