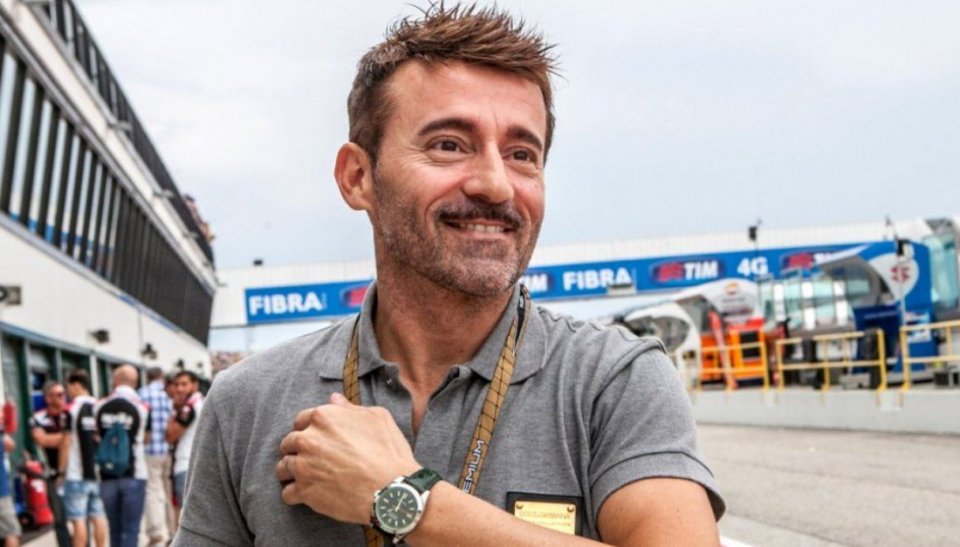 Max Biaggi was also on hand as EICMA got underway. The former rider was at the Suomy stand, where he met the many fans. The injury he suffered during the summer is now behind him, though it remains impressed upon his mind.

“As you all know, it was a difficult time in my life – he recalled - in which I decided to quit racing. I'm sorry that some of my statements were perhaps exaggerated, as I will continue to ride, as it's part of my life, just not in competition”.

Max went on to talk about the upcoming MotoGP battle at Valencia.

“Marquez is of course the favourite – commented the Italian - but something Pirro said made me smile, he said he hopes for a gift from Marc. As we well know, anything can happen in a race and this is a great opportunity for the Italians”.

Max has also been impressed that the fight between Dovi and Marc has been a clean one.

“It appears to have been a normal duel between two great rivals, sometimes only decided at the final corner. I think it's exciting for the fans”.

“Andrea is in a more favourable situation than Marc – highlighted Biaggi  - he has nothing to lose. If everything comes together at the right moment, there could be a surprise”.

This final battle in the top class is reminiscent of that between Rossi and Hayden.

“I don't really agree. It's true that Nicky had points to make up, but that was a strange weekend for Valentino, particularly the crash during the race after having dominated on Friday and Saturday”.

Max then touches on the Doctor's season.

“I think Vale has proved to be competitive again this year. Without the crash at Le Mans he would have been in the mix for the title as far as Valencia. Unfortunately he also had that training injury, which compromised things”.

While the MotoGP title is still to be assigned, Superbike is already looking to 2018. The technical changes to the regulation have not gone unnoticed by the former rider.

“I'm a little critical about the fact that there's a need to change every year. I think there should be more stability, also because these continual modifications are costly for the manufacturers. Personally, I wouldn't have made any changes".