Team Ajo is making some changes ahead of next season. The squad will continue to compete in the Moto3 championship with KTM but with only rider, Darryn Binder. The South African will wear the same colours as his brother Brad, confirmed along with Oliveira in Moto2 in 2018.

Next year will also see Team Ajo debut in the CEV, again with KTM, lining up in the junior championship with the Öncü twins. Deniz won the Asian Talent Cup this year, while brother Can finished third. The two brothers will also compete in the 2018 Rookies Cup.

"In Moto3, we welcome Darryn to our team. For us, he has been part of the family for a long time, as the brother of Brad and someone who has spent a lot of time in our garage - comments team manager Aki Ajo - He is a rider who has already demonstrated his quality in the World Championship and we are sure that next year he can take another step forward and be in the fight for the top positions regularly.

To this we add our new CEV project - he continues - Expanding the Moto2 and Moto3 structure to the Junior World Championship is a challenge. Aged just 14, Can and Deniz have already demonstrated their innate talent. We all have a lot of confidence in them and hope that with us they will learn and continue their training as riders, which is the main objective. With hard work, results will surely follow." 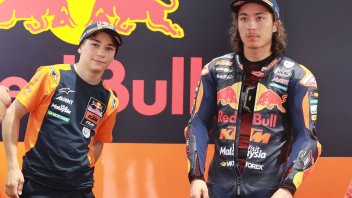 Presenting the “Oncu team”: Brothers and teammates, Can and Deniz

Financial problems forced him to reach this decision, despite having signed a contract with the Boe Skull Rider team in September.
6 days 19 hours ago