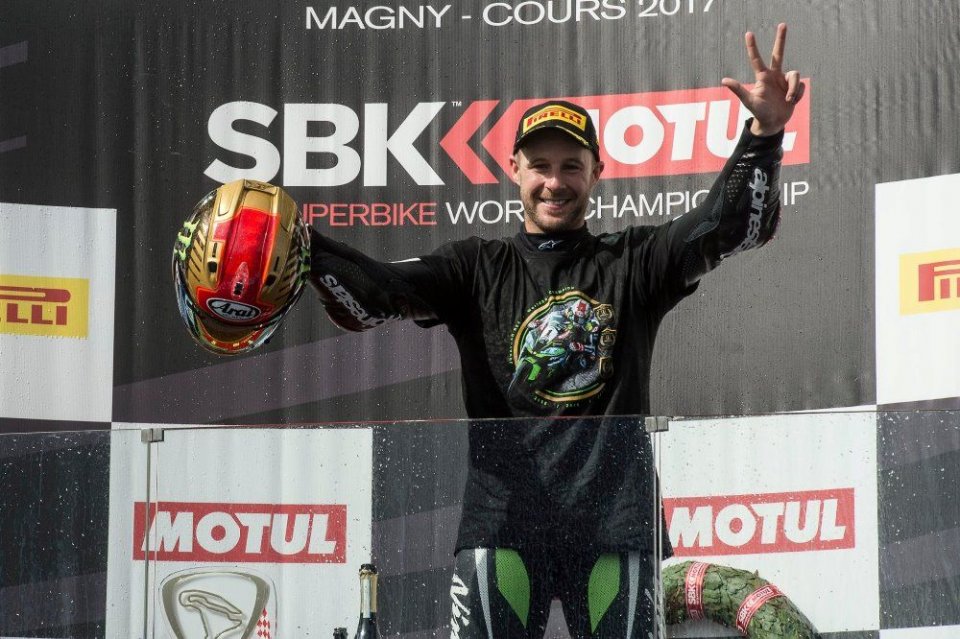 It was a different story for Turkish riders Razgatlioglu and Sofuoglu on Saturday though, their titles hopes going up in smoke. Young Toprak will do all he can to compete in the final round at Jerez, unlike Kenan, for whom the season appears to be over, unless something dramatic occurs.

THE GOOD – He scored his third title in style by winning Race 1, running away with if in fact. Hats off to Johnny Rea, the matador in a championship that he has dominated from the start. And what about Tom Sykes?  Back on his ZX-10RR with two screws in his hand, his podium finish on Saturday and battle with Melandri were some of the weekend's best images.

THE BAD – The Magny-Cours proved to be a trap in Saturday's wet conditions. Too many crashes, we hope something is done to improve it in the future, because it doesn't make for a good show.

THE UGLY -  On Sofuoglu's Facebook page is a video that shows him being transported onto the plane that would take him home. A sad image, coming at the end of a very tough season for the Turk, who was also forced to sit out the opening rounds at Phillip Island and Buriram.

THE DISAPPOINTMENT – The feeling is that Michael Rinaldi is feeling the pressure. The Aruba rider could have won the title already in France, instead he finished tenth which, with Marino closing second, means that the Italian has a tough task ahead of him in two weeks' time at Jerez. After the Portimao win, we expected more from Ana Carrasco, just twentieth in France.

THE MISTAKE - Eugene Laverty had high hopes on Sunday, but it wasn't to be. As if crashing wasn't enough, his bike was also in Rea's path, meaning that the latter hit it with his right foot and was also forced to retire.

THE SURPRISE - We are well aware that the Honda has its limits, but Davide Giugliano's eighth place serves a definite confidence boost for the team. Tati Mercado also deserves a mention, putting in the best Aprilia performance on Saturday.

THE PASS – We definitely weren't bored watching the fight for second place between Sykes and Melandri. First #66 shut the door in the Italian's face but the latter knew just how to respond. We'll leaver it to you to decide which was better.

THE INTERESTING FACT – No-one had ever managed to win three consecutive Superbike titles until now. Rea now has a new goal, or rather beating Fogarty's record number of race wins. He only needs nine more to match it.

I TOLD YOU SO – “I'll try to get Yamaha back on the podium at Magny-Cours”. What can we say, Michael van der Mark was true to his word.