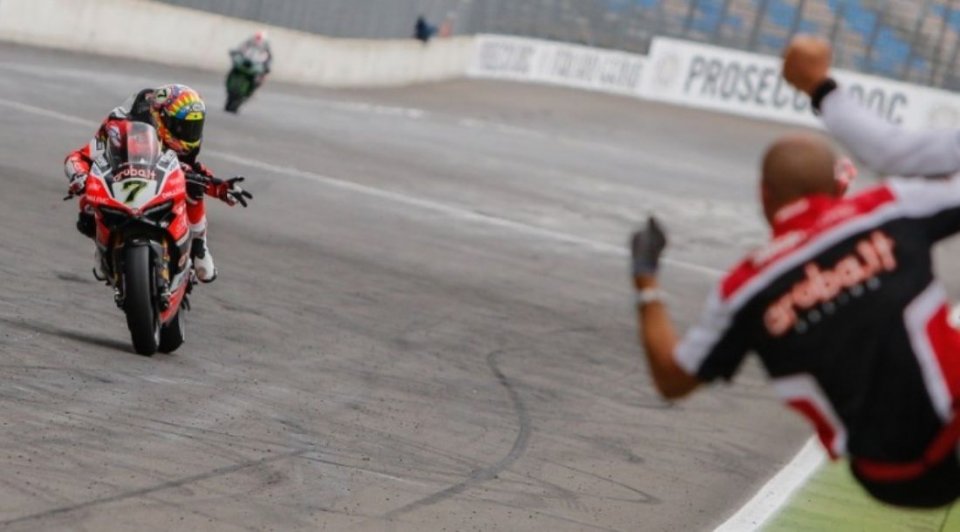 If you watched the MotoGP race at the Red Bull Ring and then decided to watch the Superbikes at the Lausitzring, in the hope of enjoying the same kind of excitement, some of you will have been disappointed. And we understand, because it was boredom that proved to be the common denominator at the latest round. In some ways, we enjoyed the SuperSport race more, with a five-way fight for the win and where Cariscasulo was fortunately not seriously hurt following the accident in which he was hit by Mahias.

Germany saw a return to winning ways for the Ducati-Davies pairing, while Rea took his umpteenth step towards the title, taking advantage of a less than brilliant weekend for team-mate Sykes.

THE GOOD It could only be him, Kaiser Davies. A double win that gives the Welshman a morale boost, especially as he started from sixth on the grid on Saturday. The title is a distant dream, but Sykes' is little more than 30 points ahead in second place.

THE UGLY We don't like to judge but we really didn't like Lucas Mahias' gesture, taking the bike while Caricasulo was lying unconscious on the ground, without showing the slightest interest in his opponent, particularly considering his experience.

THE BAD  The track marshals played a bad joke, forgetting to wave the flags when Lowes' Yamaha left oil on the track on Friday afternoon. Poor Bradl paid the price, suffering a contusion of the elbow serious enough to force him to miss race 1. And it was his home race too!

THE DISAPPOINTMENT It's just no good. An anonymous weekend for Honda, with Davide Giugliano forced to deal with the limitations of the Fireblade SP2. On Saturday the bike let him down, on Sunday he managed to reach the line. Davide and Stefan both deserve more.

THE CONFIRMATION There is a red bike shining in SuperStock too. That of Michael Ruben Rinaldi, who won his third race of the season, increasing his lead over Turk Razgatlioglu, who unfortunately crashed out. We also wanted to mention Ducati and Kawasaki, in the top four as ever, but didn't want to risk being monotonous.

THE SURPRISE Coppola, at last. After being disqualified at Donington, the SK Racing rider was able to make his comeback in Germany! A win that has allowed him to start closing in on Perez in the standings.

THE MISTAKE All's well that ends well, but Caricasulo mistake in resisting Sofuoglu was fairly obvious. We're sorry for Federico, but as he himself said, he'll make up for it at Portimao.

THE PASS It's difficult to pick one, but we'll go with that of Coppola who passed Perez through turn 10 on the last lap to score his first win in SSP300. Sofuoglu's move on Cluzel wasn't bad either, or Rinaldi's 'double'.

THE INTERESTING FACT It was the Superbikes last visit to the Lausitzring, because as of November the track will become a product test centre. We're not sorry actually because, like last year, seeing such empty grandstands definitely does nothing for the show.

I TOLD YOU SO Markus Reiterberger was true to his word: “I want to finish in the top ten at the Lausitzring”. Promise kept!

The young American rider will return to the UK domestic championship with the PTR team. Riding the brand new 765, he will have the opportunity to...
22 hours 30 min ago

He won two world titles with the Kreidler 50, losing one title to the Spanish star in a points draw
2 days 8 hours ago