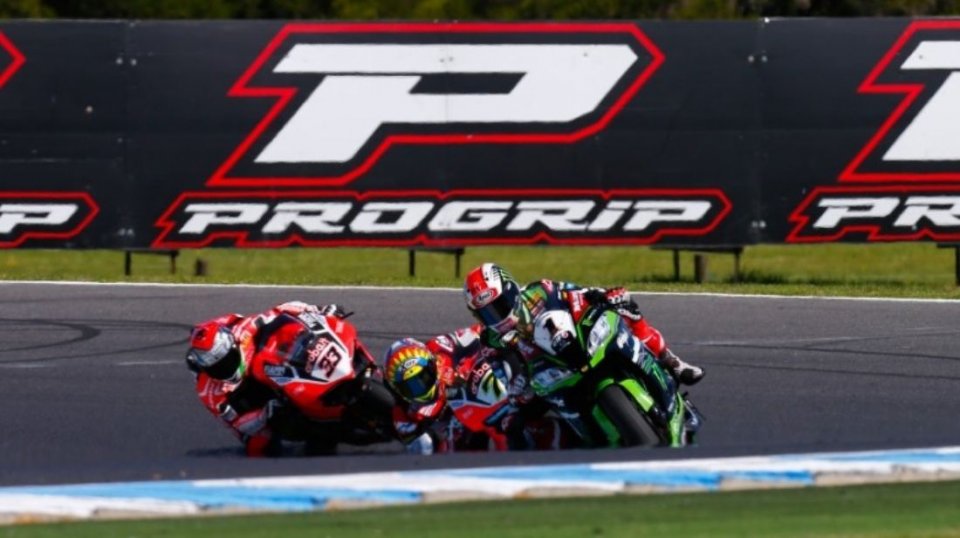 Where were we? Oh yes, at Laguna Seca, in early July, with Davies and Rea sharing the wins at the Stars and Stripes round. After more than a month's break, the production derived bikes are back, ready to roar in Germany at the first round after the summer break, taking place this coming weekend at the Lausitzring. The German track will host the Superbikes for the last time, because as of November it will become a production test centre, as agreed with DEKRA.

Three weeks ago the start of the series started to ready their weapons, carrying out a two-day test. Rea proved unbeatable and ready to take off towards the title. His Laguna win was the umpteenth sign sent by the Northern Irish rider to his rivals. The 59-point lead over Sykes allows him to sleep soundly in fact, even more so considering the limits of Aprilia, Yamaha and BMW, struggling to reach the front and therefore unable to bother Kawasaki and Ducati.

As we've said several times then, unless something dramatic happens, the story's already written. All we can do is hang on to Chaz Davies, who put on a thrilling show in Race 1 at Laguna, with that double pass through the Corkscrew. It's practically unthinkable for him to close the 115-point gap at this stage, but we're convinced that the Welshman will nevertheless do all he can to fight for second. And what about Melandri? He'll be keen to make up for his tough American weekend.

There will also be some 'new' faces in Germany. Massimo Roccoli on the Guandalini Yamaha for one, in place of Jakub Smrz, as well as Riccardo Russo, who replaces De Angelis on the Kawasaki . A blow for the San Marino rider (who reached the podium last year in Germany with Aprilia), dropped by Lucio Pedercini in favour of the Italian. That's not all though, because Lausitz also sees the return of Davide Giugliano.

Team Ten Kate has decided to entrust Nicky Hayden's Honda to the Italian, after he completed a positive test with the Fireblade SP2 in July. He will share the garage with Stefan Bradl. There will be significant interest in his return after his Ducati experience. He has no easy task ahead of him though, considering the Honda team's troubles this season. His is not the only return either, as Markus Reiterberger will also compete, as a wildcard entry, with a BMW as will Pawel Szkopek, at the age of 42.

Also in attendance are Yamaha riders Michael van der Mark and Alex Lowes, fresh from their win at the Suzuka 8 Hours. The Brit was clear during the break, stating that he needs to start winning. Their ideas are clear then, now they have to put this into practice on track.

Martin: "I’m think about the title, but I want to win some GPs, starting...