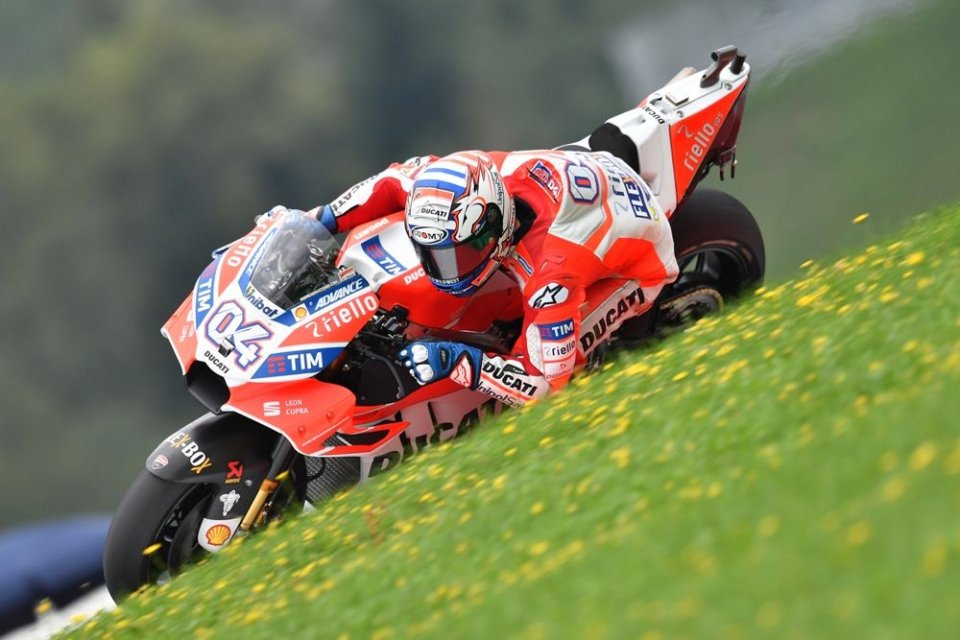 Last year he left Austria with a bitter taste in his mouth because that second place behind Iannone had all the taste of a stolen victory. However, Andrea Dovizioso never once thought of giving up, and time and hard work proved him right. And so, the win at Sepang in October came, followed by the victories in Mugello and Catalunya this season.

But there was still a score to settle with Austria and this time he settled indeed, even collecting interest. A phenomenal success for the Ducati rider after a heated head-to-head with Marquez, riddled with passes and counter-passes.

The Spaniard gave him no quarter, but Dovi never pulled back, responding blow for blow. It was a challenge of nerves with the king of late braking and hand-to-hand combat, decided at the last corner, where the Italian responded to the five-time world champion’s attacks, taking his third win of the season.

Hats off to him, because this was a textbook victory with honours: “I am very happy with the result - the Borgo Panigale rider began - the Ducati was fantastic and it was a great battle with Marc. I knew that he would attack at the last corner but I did not brake and then I was able to overtake him and win.”

The Honda riding Spaniard must therefore settle for second place: “I think it was a fantastic battle. I pushed to the limit - the number 93 rider commented - I tried to manage the rear tyre as best as possible, but I struggled. I did the last corner at the limit, but it wasn’t enough.”

Also on the podium was Dani Pedrosa who, in the second part of the race, exploited his pace: “It was a complicated weekend. I even had to go through Q1 - the Spaniard commented - At the beginning I struggled with pace, but then I managed to find the gap and close the distance. It’s a pity about the finale, but the bike was sliding around too much.”

Jorge Lorenzo, on the other hand, did not finish on the podium. After a lightning fast start, he then had to reckon with the return of Dovizioso and the Honda riders. It was a Sunday to forget for the Yamaha Factory bikes, even beaten by Johann Zarco’s Tech3 Yamaha.

The Frenchman finished fifth ahead of Viñales and Rossi who were never able to get into the game except for in the opening laps. Behind the Doctor was Bautista, followed by Baz and Kallio. 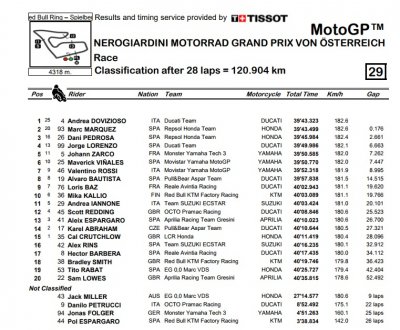 Marquez: “I have to be patient, life has taught me to be positive”