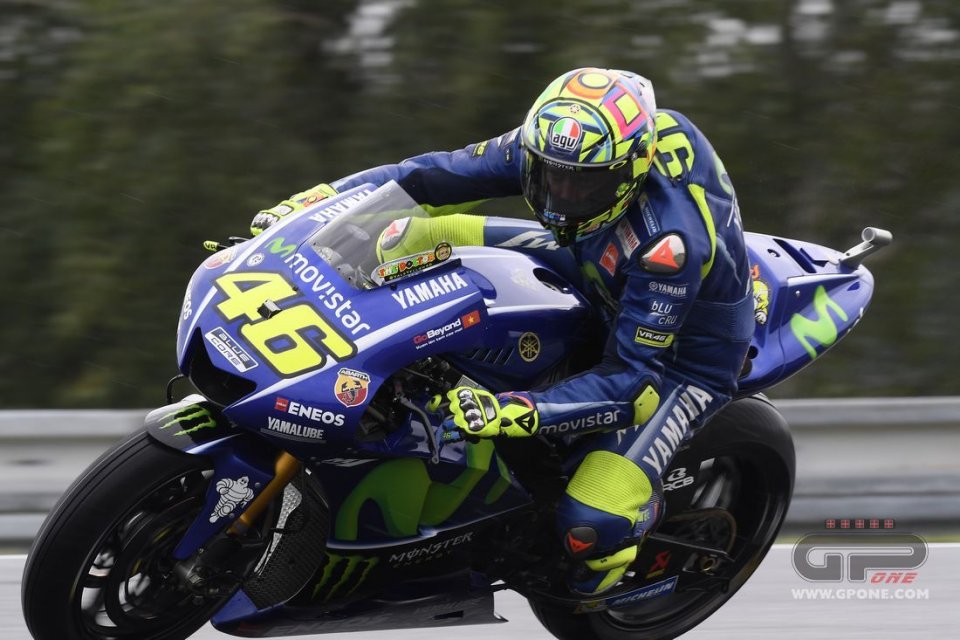 One way or another, when there is a flag-to-flag race, Valentino and his team screw something up. “The only satisfaction is that usually I’m the only screw-up, whereas this time there are 3 or 4 of us wearing dunce caps today” Rossi jokes, self-deprecatingly, knowing that there is still work to be done where strategy is concerned.

The Doctor does not want to point the finger at anyone, “It isn’t very elegant to say who is responsible or exactly what happened, but there was a communication problem. A delay of about ten seconds that caused me to lose a lap before coming into pit lane” he explains.

The lesson from Sachsenring last year didn’t help?
“The situation here was different, because in that case they had put my board out telling me to come in and I did not stop. Precisely because of that, we had agreed that as soon as I saw the signal I would have come in to change the bike.”

But…
“The signal arrived a lap late. Maybe the problem is that in these situations I am always first. I just go too fast in the wet (he laughs). All joking aside, there was also a bit of hard luck.”

In what sense?
“Honda is better than us in these situations and when Pedrosa went in, many followed him, gaining an advantage.”

They are good…
“I will admit that this type of race is not my strong point, but I am almost certain that by the end of my career I’ll manage to defeat the flag-to-flag and finish on the podium (he laughs). It’s a pity, because we could have brought home some important points. And then, if it had been a dry race from the start, I would have been able to battle for the podium and if it had been wet for race distance, even something more.”

Who makes the decisions in these cases?
“From the garage it is easier to understand the situation, but I will admit that understanding the right time to come in is not my strong point.”

Would having messages on the instrument cluster have helped?
“Yes, but we are not ready to use them yet, although we are close.”

What’s done is done…
“It would have been better to be 10 points behind Marquez instead of 22, but the championship is still wide open. Marquez took a risk and we made a one-lap mistake, otherwise I would have been able to battle with Pedrosa. However, the important thing is to have been competitive throughout the weekend.”

Is that what makes you optimistic?
“Yes, we worked well and, unlike what usually happens, we were able to be fast even straight away after the tyre change. I had a lot of fun coming back from behind and in the end I missed the podium by a hair.”

Like your brother Luca…
“We are 4th place brothers! (he laughs) He took a big step forward this year. Unfortunately, he injured his shoulder and that limited him, but he is demonstrating good potential.”

It’s a pity about the 6 lap race.
“On Sunday, the most important thing is that at two o’clock MotoGP starts, but it would be better to set a minimum number of laps for the Moto2 and Moto3 races. I don’t know how many, but certainly more than 6.”