After his stunning victory in race two at Misano, we thought we'd see a Marco Melandri who could also fight for the win at Laguna Seca, but instead the Californian weekend proved tougher than expected for #33.

The same result and same gaps from the respective race winners -Davies and Rea- for the Aruba Ducati rider, two second places, 17 seconds behind the leader, after difficulties riding his Panigale R, with very little grip after only a few laps: “it was a really tough American round for me - explains Marco - as well as unexpected heat, I had to battle with my bike; in the morning, in cooler temperatures, I was fast on the flying lap and in terms of race pace but, in the afternoon, when the track was 20° hotter, I was lacking grip at the front but also at the rear of the bike, and couldn't get it to do what I wanted”.

Was it a one-off, or does the Panigale struggle in high temperatures?

“The Panigale has a very small set-up 'window'; when you're inside this, all is well, but when the temperature varies, the bike proves very sensitive to any chance. I still need to find the right formula to stay inside that 'window' as I need to”.

In race 2 at Laguna Seca, Rea gobbled you all up in one bite…

“On Sunday, Johnny and his ZX10RR made an impressive step forward. Aside from the fantastic start, the factory Kawasakis have shown that they are also superior in that they can lay the bike down from upright in the blink of an eye, effortlessly”.

The distribution of your twin seems violent, can you confirm that?

“It's no longer a case of having so much torque at low speed, as was traditional for every twin engine; now I, Davies and Forés have to change gear more than the 4 cylinders, finding the right balance when it comes to power distribution”. 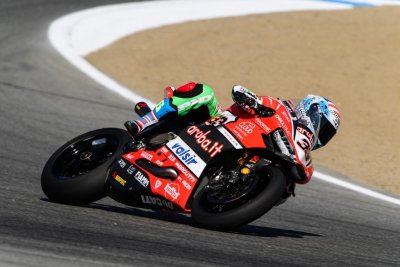 Yet, at Misano, it seemed as if you had a perfect set-up when starting to open the throttle…

“It's true - the test at Misano before the races definitely helped me, seeing as every track with this bike is new to me. I was as fast as I hoped to be at Misano and I hope our next test at the Lausitzring can also help me a bit, considering that I've never ridden there”.

So is the twin coming to the end of its SBK career? Will the V4 improve things for you?

“I don't know, I still have a lot to learn about this bike. But I think that if they have designed and built a V4 engine in the factory, it's because they see it as offering greater room for development. In the meantime, I'm focusing on finishing this season as well as possible”.

You're confirmed for 2018 with team Aruba?

“I don't have anything in my hand yet, Ducati has an option in its favour but their intention, mine too, is to continue, We just need to put pen to paper, the results are not a variable in confirming our agreement. Next year I want to continue with the factory Ducati team and race with the Panigale twin once more”.