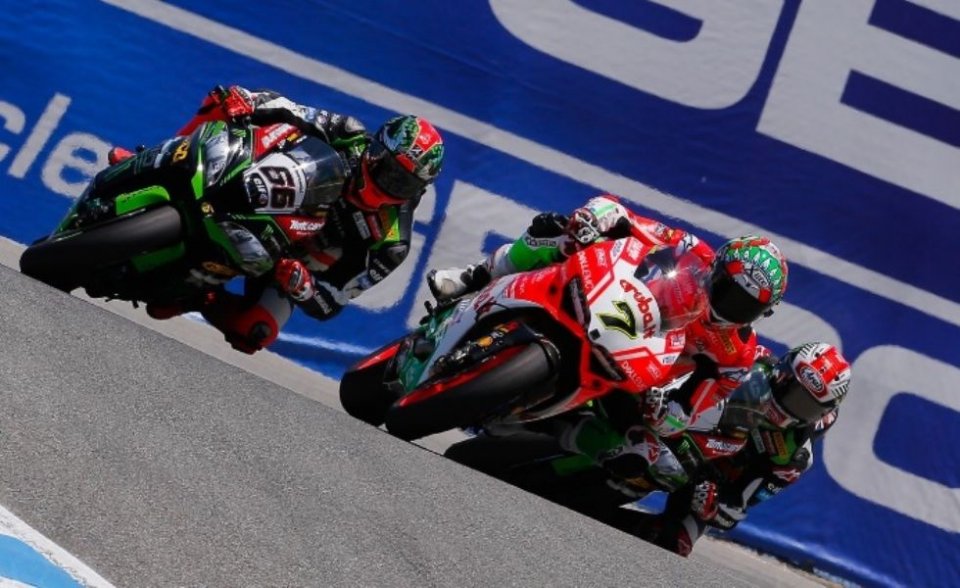 At the end of the race the winner waited impatiently for the #69 flag, in honour of his rival and friend who, like him, so loved the Laguna Seca track. And to think that Chaz Davies came to the States with some doubts: after the bad accident at Misano, the number 7 Aruba rider was forced to rest, unable to train in the run up to this weekend.

But there was no need to worry - the Ducatista did everything right, passing Tom Sykes in spectacular style through the Corkscrew, taking the lead and crossing the line first: “this is a fantastic moment for me -  said Chaz- because after being in hospital three weeks ago, today I was able to win. The track was slippery and I risked crashing three times, but I controlled the situation. I dedicate the win to Hayden and his whole family”. A special commemorative livery for the Ducati Panigale, which recalls the 750 F1 ridden by Marco Lucchinelli at Daytona in the mid 80s.

This is Davies' fourth win of the season and the Welshman is now in the company of legends such as Anthony Gobert, John Kocinski and Ben Bostrom, all of whom have won three races at the Californian track, where the sun always shines on he who is able to make the difference around the undulating layout.

Johnny Rea tries to stop Davies today but, after a few close calls with his Ninja, the world champion decided not to take any risks, finishing second. The third step of the podium was taken by Tom Sykes. After making a great start from pole, the #66 Kawasaki saw both Davies and Rea get by through the Corkscrew. Sykes nevertheless goes down in history: Ben Bostrom was able to pass two riders in one move through the Corkscrew, while Tom on the other hand was overtaken by two opponents in one move.

Marco Melandri ran a solitary race to close fourth, a position he is not happy with. Xavi Fores is rather more pleased with his fifth place finish on the privateer Barni Ducati, ahead of a strong Leon Camier with the MV Agusta, the BMW of Jordi Torres and the only Yamaha R1 left in the race, that of Michael Van Der Mark, eighth across the line.

After Laverty crashed out while battling for fifth place, the two Aprilia of Mercado and Savadori reached the line, with the Argentinian ninth followed by the Italian. Eleventh for Stefan Bradl on a not yet competitive Honda Fireblade. Roman Ramos, riding for team Go Eleven, and come Raffaele De Rosa, on the second Althea BMW, both did well, finishing in the points zone. Fourteenth for Alex De Angelis, and one championship point for the Californian Jake Gagne. 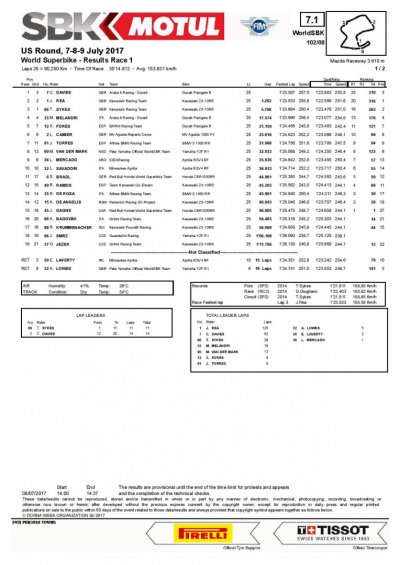