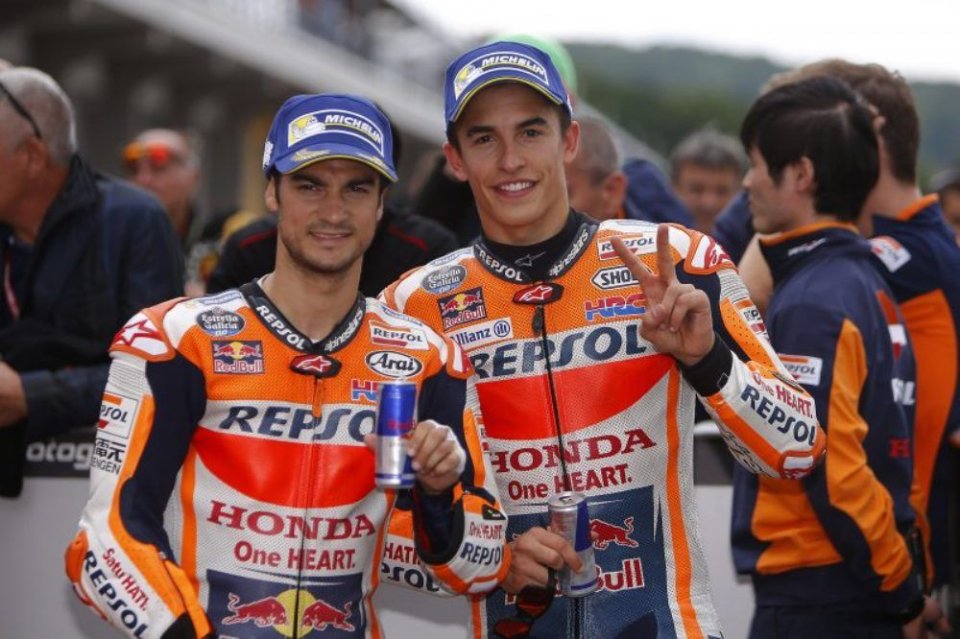 On the Sachsenring he is a sure thing and we had the umpteenth demonstration of this today. Marc Marquez put his signature on pole position Saturday, filing away a textbook day. First the best time in FP3 and then confirmation in qualifying.

For number 93 it was not all so simple and expected

“In the wet I found a critical situation, even risking crashing – he revealed – It was strange. In fact, I waited to push to the limit, partially because with less water I found less grip. My goal was to start from pole position and I achieved it. Now I just need to hope for a dry race.”

Marc approves of the new asphalt without mincing words.

“In past years the track dried out quickly too, but now even more so – he pointed out – Tomorrow could be a flag to flag race, but I am certain that we will be ready in either condition. Even in the wet I think I have the right confidence.”

The German round is a ripe opportunity to set his sights on the championship lead, but he cautions against too much optimism.

“It does not only depend on me, because if Dovi and Viñales were to finish second or third, nothing would change in the standings, even if I were to win. The most important thing will be to battle in any circumstance – he said – trying to be fast right from warm up. Here we have a great chance to get close to the riders ahead of us and I will need to take advantage of it.”

Then he explains what happened with Viñales.

“There was a small misunderstanding. Initially I overtook because I was trying to find my pace with the rain tyres, but maybe in the turn I had a different line than he did. Maverick went wide and then he came back inside, making contact. What counts is that we both stayed in the saddle, but in any case we have already cleared it all up.”

And then there is the classic social media question. This time it has to do with the strangest dream.

“I can’t say. During the weekend, the other riders and I often dream of falling off the bike. Or being in the race, like at Assen, where I dreamt that I had my helmet but not my gloves. Luckily, then I woke up.”

On the front row Marc will find his teammate, Pedrosa, who did the third best time in qualifying. This is an important sign after the difficulties of last Sunday.

“I am happy because I showed that I can ride well both in the dry and in the wet – Dani explained – Already yesterday I felt competitive. I think being out front is fundamental because the track is narrow and overtaking on the first corners is not simple.”

“We worked well in the dry and so I am very confident, but the same is valid even if it rains. Staying focused will be fundamental because the conditions change quickly.”

Social media question for him too, about phobias.

“Snakes really scare me a lot. But when I go surfing, the dark colours of the sea also frighten me.”