There wasn't the usual festive atmosphere. At Donington the minds of many fans were on Nicky Hayden, who passed away one week ago. Just before Race 1, riders, teams and personnel gathered to remember the Kentucky Kid. His team, bike, helmet were all there. Then the engines were started, over a race weekend where the actual racing took second place.

THE GOOD Donington or DoningTOM. You choose. Never before, in Superbike, has anyone been able to win nine consecutive races at any track, as Tom Sykes now has. In race 2, the Kawasaki man was going for number 10, but as he himself said: “Someone else was going to win sooner or later". Let's not forget Leon Haslam, perhaps some had forgotten about his talents. A special mention for Alfono Coppola too, the first Italian to win in the SSP300.

THE UGLY Aprilia, what's going on? The sixth round of the season and team Milwaukee seems to be in a hole that they are finding it hard to get out of. It's not nice to see Lorenzo Savadori close 40 seconds from the front, at a track where he only just missed the podium last year.

THE BAD The Pirelli tyres played a poor joke on Johnny Rea. The current champ was about to secure his eleventh win of the season but instead he was thrown from his Kawasaki. The manufacturer rushed to react, removing the tyre in question, solution VO602. It's not only Michelin that has problems!

THE DISAPPOINTMENT in the UK, Marco Melandri wanted to make up for race 2 at Imola, instead he leaves Donington disappointed. On Saturday Lowes slipped by him a few metres before the finish line, while on Sunday his Ducati let him down. In three weeks, he'll be taking resits at Misano.

THE SURPRISE Finally, we should say. Yamaha had been chasing its first podium of the season and Alex Lowes got the job done. In Australia he'd just missed out, but this time no-one was getting in his way. And to think that at the first corner he was in last place! The team only just missed out on a double podium, with van der Mark coming close in race 2.

THE CONFIRMATION Kenan Sofuoglu is back and wants to make up for what he missed out on at the start of the season. At Donington the Kawasaki rider scored his third consecutive win, after Assen and Imola, proving to one and all that break time is over.

THE ERROR it's only May but Chaz Davies has already hit the ground three times. Too many for someone who dreams of fighting for the title.

THE PASS Rea on Sykes in Race 1 while changing direction, but also Lowes on Melandri or Davies on van der Mark. You choose!

THE INTERESTING FACT This season, prior to Donington, Johnny Rea had never crashed three times in a race times, and had always reached the finish line. Luckily, he set things straight on Sunday, scoring Kawasaki's 100th win in SBK. Let's not forget the lap that saw Tati Mercado and his Aprilia lead the way, let's hope this is something we can see more often in the future.

I TOD YOU SO “Sooner or later I'll be on the podium”. Alex Lowes' words in Australia, he kept his promise! 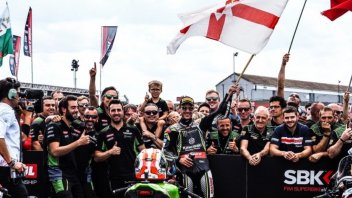 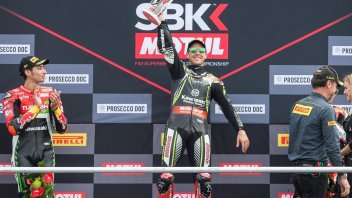 Rea: "I never liked Donington, but this weekend was perfect."

Dorna signed from 2022 to 2026. The Ricardo Tormo circuit will alternate with the others on the Iberian peninsula but will remain the last race of the year.
13 hours 9 min ago

KTM's sports manager at the gates of 2020: "This is the highest point of engineering applied to motorcycling and has taught us to go beyond our limits"
2 days 13 hours ago

VIDEO - A challenge of reflexes between Red Bull Motorsport athletes, with Verstappen, Gasly, Albon and Kvyat who challenged Pol Espargarò
3 days 8 hours ago