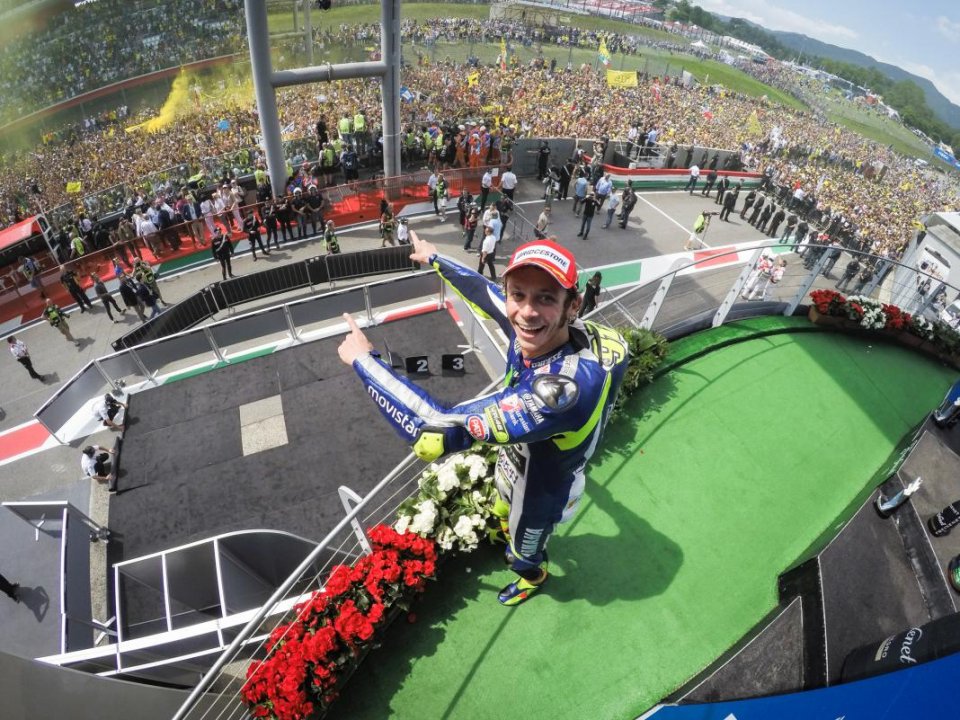 A human tidal wave washing over the track, all wrapped up in yellow. This is Mugello, the most awaited round of the year for motorcycle racing fans. This is the weekend when no one sleeps, when engines roar to life from dawn with hospitality and passion being the common denominator.  But the Italian Grand Prix is certainly also Valentino Rossi’s time to shine, supported by stadium-style cheering fans that you won’t find at any other track on the planet.

Over the years, number 46 has managed to delight his fans with wins on the final corner and gags, but there has also been no lack of crashes and disappointments, the most recent being a year ago with the M1 leaving him stranded just as things were shaping up for the best.

The bond between the Doctor and the Tuscan track is unbreakable and it began in 1996 astride an Aprilia, when Valentino had to settle for fourth place on his maiden ride. However, the following year he was victorious ahead of Jorge Martinez and Garry McCoy.

The track is one of those that highlight Rossi’s skills, so much that he took a brace in 1999. However, there was an unpleasant event at the end of the race for the nine-time world champion. As he attempted to make his way through the many fans who had invaded the track, the Doctor knocked over his photographer, Gigi Soldano, ending up on the ground. Luckily no harm came to either of them. 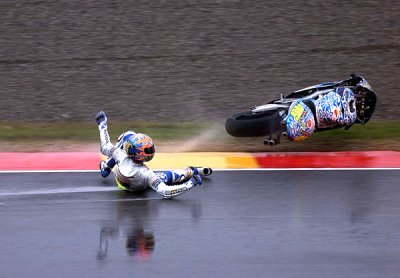 He would have to wait until 2002 to see the top step of the podium again, though. Indeed, because the previous year, Rossi crashed out on the last lap to watch his third place position go up in smoke. It would be impossible to forget what was one of the wettest rounds ever, but also memorable was the brand new, showy Hawaiian livery that the Italian’s Honda was flaunting that day. 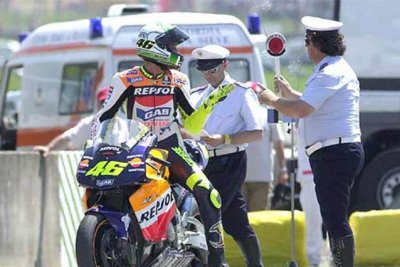 But 2002 was the redemption year, with Rossi winning with a two second advantage ahead of Max Biaggi. Just after the finish line he was stopped by the police, who cited him for speeding. It was just one of the many gags that number 46 had in store for his fans. The 2002 race kicked off a winning streak of no less than seven consecutive victories on the Tuscan track that would last through 2008. His rivals could do little more than pick up crumbs, whereas the Italian fans will always remember the 2005 race which ended with an all-Italian foursome in the top spots. Rossi ahead of Biaggi and Capirossi who squeezed every last ounce of power from his Ducati to snatch a podium finish from Melandri. It was a Sunday that even today feels like the stuff of history. 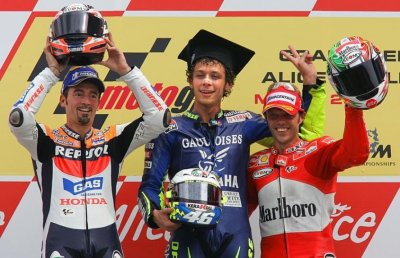 Only in 2009 was Valentino’s domination on his home track interrupted, leaving space for Casey Stoner’s victory. Italian fans were consoled that Sunday by an exciting head to head in 250 between Mattia Pasini and Marco Simoncelli, the latter finishing second from number 75.

To this day, 2008 remains Rossi’s final confirmation on the Tuscan hills, because in 2010 his weekend came to an end during Saturday’s free practice, when he fractured his tibia and fibula after a crash on Biondetti, which was enough to make him miss three races besides his home GP.

His experience with Ducati did not lead to any great satisfaction. He only finished sixth in 2011, 25 seconds behind Lorenzo. The next year was better, closing the gap behind the Majorcan to just over ten seconds. His return to Yamaha in 2013, however, made Mugello fans dream big, but the expectations of the many enthusiasts evaporated after less than one lap on Sunday, because Bautista collided with the Doctor, sending him into the gravel.

And so, Valentino was back with his knife between his teeth the following year, and this time no one could deny him a podium finish. Marquez finished first ahead of Lorenzo, followed by the number 46 Yamaha two seconds behind the winner. The script would remain the same for 2015 as well, with the Majorcan winning that year and Valentino finishing third again, this time behind Iannone.

The right opportunity to be back on top seemed to be the 2016 edition. Rossi enchanted in the qualifiers on Saturday, taking pole position, but in the race Lorenzo was a shark – enough to take the race lead as early as San Donato. The head to head between the two teammates was thrilling, right up to the moment when a cloud of white smoke enveloped the Doctor and his Yamaha. The M1 engine blew and in that same moment, the nine-time world champion’s dreams of glory evaporated. 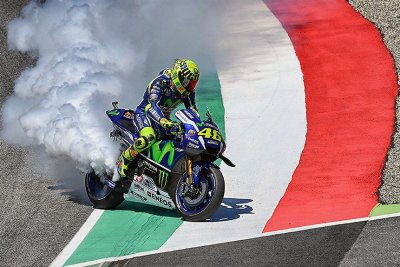 In less than one week, Mugello once again awaits in the hopes of celebrating his first win of the season. What better place than in front of his own home crowd?