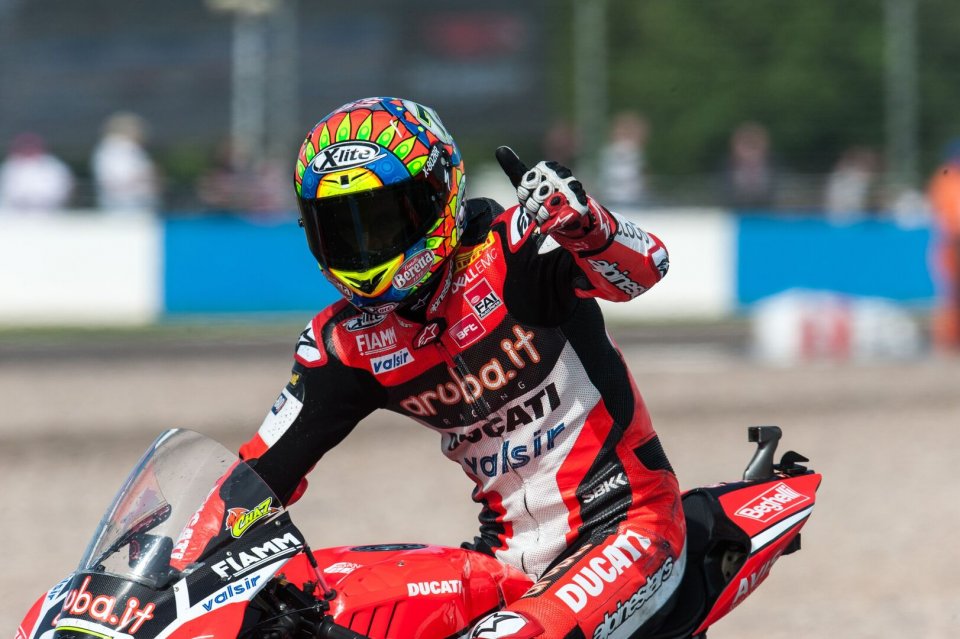 It definitely wasn't the perfect weekend for Chaz Davies at his home track of Donington, but at least he scored a third place finish on Sunday to lift his spirits somewhat, considering the eighth place finish in race 1 and the way in which the latest podium was achieved, after a great comeback.

“It would have been nice to get away with the Kawasaki pair - comments Chaz - but third place is all we could ask for today. To be here, on the podium, in front of the home fans, was the most important thing. We had a terrible start, which made it for a very difficult race. We had to get through a lot of traffic, I was trying to avoid riders crashing in front of me, and it felt like playing a game of Mario Kart. (he laughs) . Towards the end, when I was getting closer to VD Mark, I didn’t have great grip because I had to stress the rear a lot to come back through the field."

A complex race then, that projects Chaz towards the next round with a smile on his face: “I’m confident for the rest of the season because this track has always been difficult for us and we can take a lot of positives going into Misano.”​​​​​​​

There are less smiles on the other side of the garage. Marco Melandri's race was brought to a premature end due to a technical problem (transmission to be precise), always a hard thing for a rider to accept: “It’s been a difficult weekend for us. Since Imola, we've been struggling with some unusual issues. The bike is moving a lot under acceleration, the rear is lifting off the ground while changing gears, and we’re forced to cut some power. Today, unfortunately, these vibrations caused the front sprocket to fall off. It’s a real pity, because today the bike was more balanced and I had a better feeling with the front."

Marco hasn't lost all hope though, and tries to see the glass half full.

“Despite all these issues we’re always fighting for podiums. The team is working hard to improve the package, and we’ll keep doing it during next week’s test. We’re very determined to find a solution as soon as possible in order to fight for wins again.”

The next round is also the team's second home event, or rather Misano, and in order to best prepare for it, the squad will be testing at the Italian track on Wednesday and Thursday.

VIDEO - Pol Espargarò in hospital, will not take part in FP4 and qualifying...