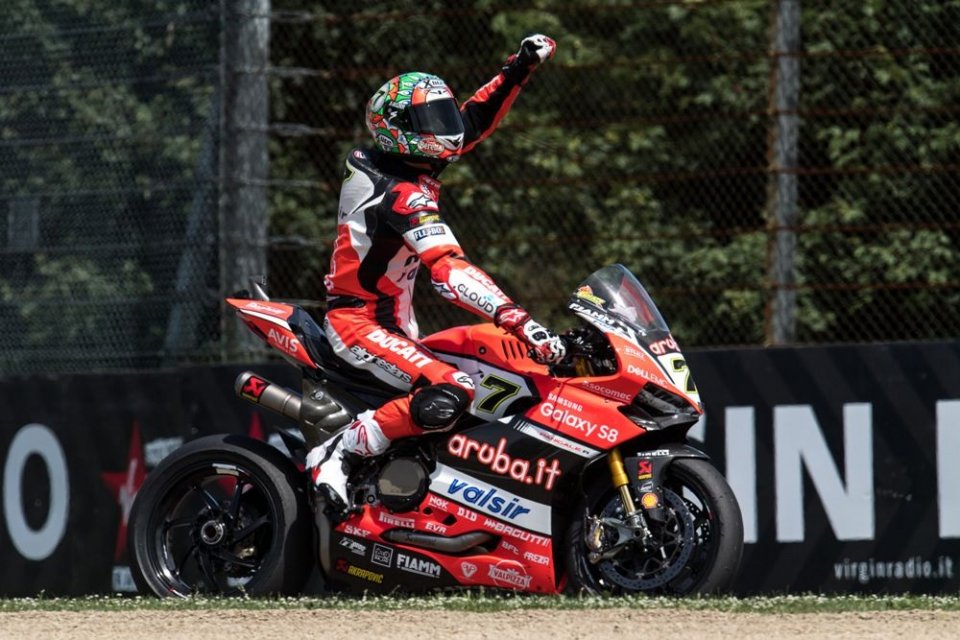 The Superbikes were at Imola over the weekend, along with 75,000 passionate fans who crowded the grandstands over the three days. Heat, passion and the helping hand of the weather, with sunny skies from start to finish. Chaz Davies shone on track, over a weekend where red was undoubtedly the common denominator.

THE GOOD What a showman this Chaz Davies, the Welshman didn't put a foot wrong at the Santerno track. Up front in Superpole, Race1 and Race2, a perfect weekend. The same goes for Rinaldi in the Stock1000, icing on the cake for the Aruba team.

THE UGLY It's no good, the tracks may change by the outcome remains the same for Nicky Hayden's Honda, ruled out on Saturday after just four laps. We don't want to know what Federico Caricasulo's mood is like either. A bitter Sunday for the Italian, who crashed in warm-up, before finding his Yamaha wouldn't start and having to retire. We'll see what he can at Donington.

THE BAD We know him well and he's never one to mince his words. Post-race, Tom Sykes didn't hesitate to criticise Ayrton Badovini, defining his staying on track with a broken engine as stupid. We'll await the Italian's comeback.

THE DISAPPOINTMENT Lorenzo Savadori was dreaming big in front of his home crowd, but was instead caught up in a difficult weekend, in which he struggled with his Aprilia. In Race2, he closed almost 50 seconds from Davies on the Ducati. Something needs to be done, and fast.

THE SURPRISE  For the first time this season, Johnny Rea doesn't reach the throne at a World Superbike round. If this isn't a surprise...

THE CONFIRMATION Him again, Johnny Rea. If he doesn't reach the top step of the podium, worst case scenario he finishes second, just like at Aragon. Let's not forget Supersport either, as Kenan Sofuoglu is back and wants to get back on top.

THE MISTAKE He himself admitted it, the mistake through the chicane when trying to pass Melandri cost him a slice of Race2. At the end of the day, Rea too is only human.

THE PASS A huge roar went up from the grandstands as Chaz Davies skilfully got past Tom Sykes at the last chicane. The Welshman's pass made buying a ticket worthwhile.

THE INTERESTING FACT There were many parts to this particular round, with sixteen red flags over the three days, as a result of crashes, accidents and broken engines. Luckily mechanics were packing up before they could reach 17. Let's not forget Saturday either, when the electricity played a joke on the public and staff. A total black-out at the track, later resolved.

I TOLD YOU SO “Aprilia has what it needs to become the third force in the Championship”, said Lorenzo Savadori. We really hope so, though after what we saw this weekend there's still a lot of work to do. The same goes for Marco Melandri: “On Sunday the aim is to take on the Kawasakis”. We're sure he'll try again in two weeks' time.

HAPPY ENDING All's well that ends well. Andrea Tucci and Luca Marconi didn't come off well at Imola, transported via helicopter to hospital in Bologna. They've reassured us all via social media that they're doing OK though. We send them our best wishes and look forward to seeing them back on track. Eugene Laverty scared us too, when his Aprilia went up in flames. The Irishman is made of strong stuff though, Phillip Island and Sepang taught him well!