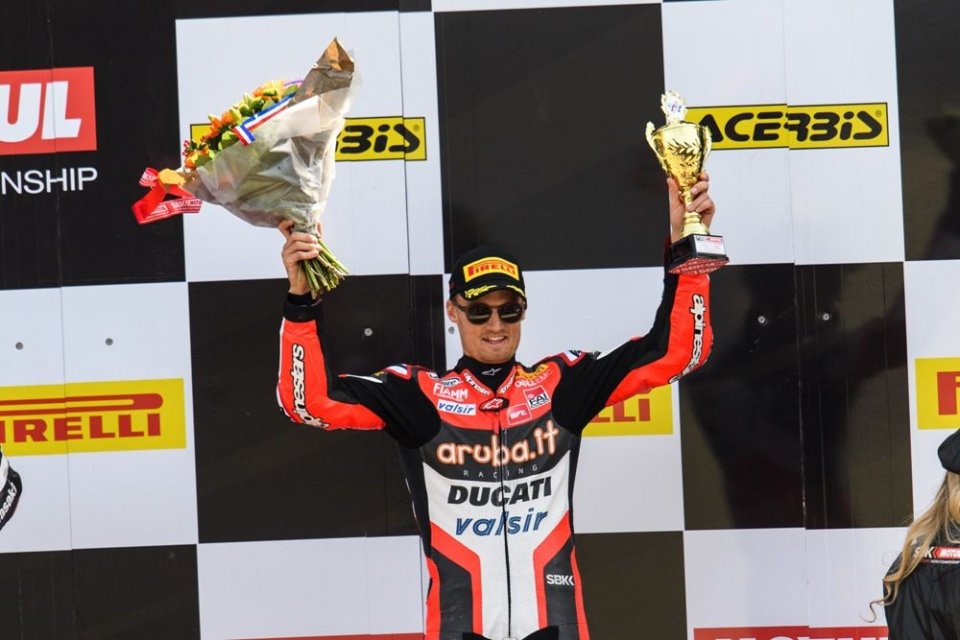 Sunday at Assen rewarded Chaz Davies with the lowest step of the podium. A performance that satisfies the Welshman in part, given the race 1 retirement. The Aruba rider couldn't have done more, having been caught up in traffic through the opening laps.

“I tried to push, but the bike didn't work as I expected, I was lacking confidence at the front, and it was impossible to close the gap to Rea. I'm upset though I have to be fairly happy with the result".

You were in difficulty in the early stages.

“I didn't have the confidence I had in Race 1. Unfortunately, as I've said, the front grip played a part, as we were a little on eggshells in the last ten laps. We need to understand why, and see whether it was the set-up or the strong wind. It was important not to crash and to bring home points, seeing as I couldn't do more than third”.

Now it's on to Imola.

“Our aim is to win every time we have the chance, and we hope to do so in two weeks' time, seeing as it will be a special round for the Ducati and me".

Things were worse for Marco Melandri. The Italian crashed out thirteen laps from the end. Despite closing in third place yesterday, the TT weekend was less than ideal for #33.

“Today's conditions were difficult, the wind was really strong. As a result, I made a mistake at turn 11 on lap six, going onto the grass where i was passed by four riders. I was catching up again though”.

Then the crash one lap later.

“A pity, as I could have battled with Vd Mark. Our bike was more competitive than yesterday, though it was still moving a lot".

Is that what conditioned things?

“I've always suffered with this kind of problem, maybe because I'm very light and can't sufficiently load the rear on this type of asphalt. Now we head to Imola, a track I really like and where I'm confident we'll be able to leave this problems behind and completed two great races”.