The Spanish press has spent months drawing up the Marquez-Vinales battlefield, with the world champion on one side and the youngster on the other (so to speak, there are only two years between them) who wants to take the crown. In reality, there hasn't actually been a duel during this first part of the season, as the two have been like yin and yang.

Marc has made his worst ever start to a MotoGP season, finishing 4th in Qatar and crashing in Argentina. Not since 2011 have results proved so poor for him, when he scored two zeros on his debut in Moto2.

In contrast, Maverick won at Losail before repeating feat at Termas de Rio Hondo, an opening double that few riders have ever achieved. if we look at MotoGP, only two in fact: Vinales himself, and Marquez in 2014  (the year he scored 10 consecutive wins).

Statistics tell us that, if we want to find another Yamaha rider who's done the double, we have to go back to 1990 when Wayne Rainey, in 500, won first at Suzuka and then at Laguna Seca.

To say that Maverick already has hypothetical hold of the title would be crazy, but he has earned a good advantage. Because the only rider to have saved the situation is Valentino, 14 points behind his team-mate, while Dovizioso, 3rd, is already at - 30 with Marquez following at -37. 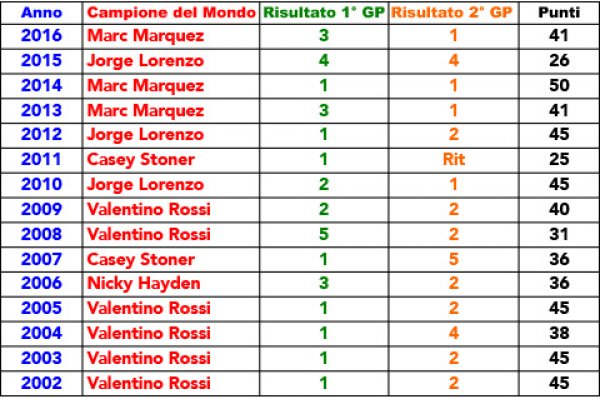 If we continue to play with the numbers, and consider the last 26 years of racing (back as far as 1990) those who have won the first two GPs have often gone on to win the title: Rossi did so in 2001, Doohan in 1995 and 1997 and, as we've said, Rainey in 1990. We say often because at times this was not the case; in 1999 Kenny Roberts Junior won the first two races but the title went to Criville, while the same happened to Doohan in 1992, when Rainey was crowned champion.

Returning to MotoGP specifically, there have been two cases of a  “false start” leading on to eventual victory. In 2015 Lorenzo didn't reach the podium at the first two races, collecting 26 points, while Stoner did worse in 2011, earning 25 points with a win and a DNF.

This is what the statistics tell us, always ready to be disproved or confirmed. All we can do is make ourselves comfortable and enjoy the remaining 16 races, we don't need numbers to tell us that we're in for a great show.