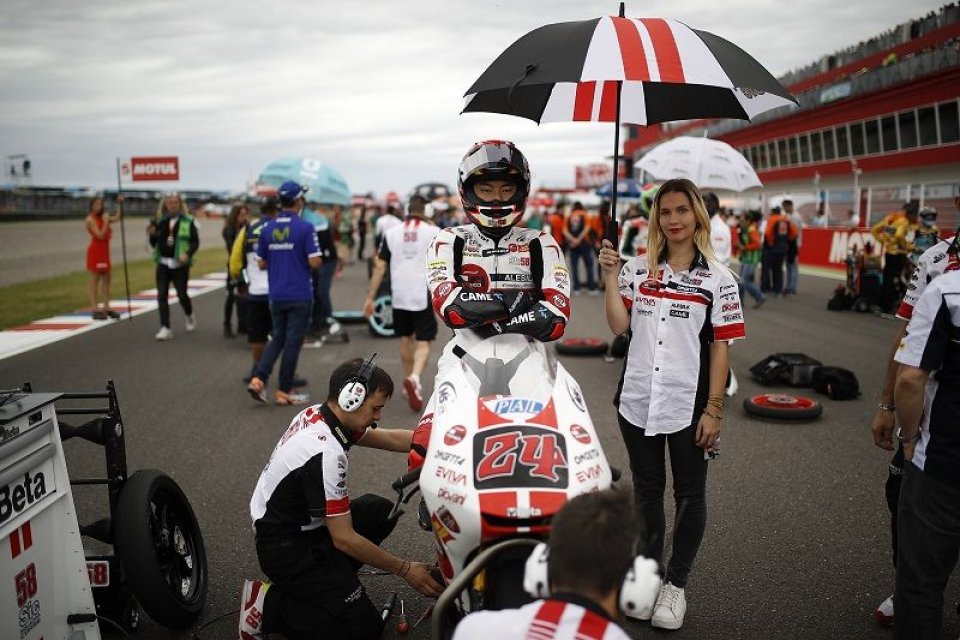 Paolo Simoncelli has returned to the world championship this season with his Squadra Corse SIC58. An emotional adventure for many reasons, undertaken with the desire to do well and with a smile on his face.

In Argentina Suzuki finished the race in eighth place, with Arbolino earning his first championship points.

Paolo summaries the Termas de Rio Hondo GP in his own words, as ironic and plainspoken as ever.

We will leave you with his words.

“It's been a fantastic weekend. We held pole position for 7/8 minutes, albeit in the free practice, we were close to closing 6th, we finished in the points..... great, really great!”

“Despite the adventurous start - we had to change hotel, they impounded our Hertz car, that wasn't insured - the trip ended well. Argentina, what a place! You have to be careful but also look out for what you drink or you'll have to run to the bathroom and find a line. In this place, where poverty is always close at hand, around every corner there were people celebrating  during the GP week, every bar is lively and every bike sounds like the radiator will blow up at every stop sign, Tony was able to redress the balance”.

“Tatsuki is growing, he's finally realised that he's also strong. He started for the first time with the ninth fastest time, he could have come home 6th in the race, but settled because this was his first, hard-earned 8th place and he didn't want to throw it away. He is aware of his potential now, and said: ”I can run up front!” and smiling with his Japanese version of Italian romagnolo dialect “A’ sem trop fort!” (we 're too strong), we're influencing him in Riccione”.

“Tony, in practice, was in pole for several minutes, a dream that came to an end with the rain, which in the end meant he was forced to start 24th, but he knew what he wanted. In fact, he made one amazing pass after another to close in 14th place. And so we were in the points zone with both! We have two very strong riders, if the race had finished a few laps earlier, because of a dog on the track maybe, as one of the mechanics was hoping at one point (as dogs are everywhere here), we could have finished 7th and 8th, but that's OK, we've already said that the "ifs and buts" get us nowhere".

“Both have a debatable approach to the warm-up. According to Tatsuki nothing works, it's all wrong, while Tony waits for the groups to carry out some overtaking practice. Though each rider has his way of approaching warm-up, focusing and preparing for the race....  I can only say that I'm happy and satisfied, with the whole team, with what we can do. If I didn't expect anything from them it would mean that I don't believe in our potential, but I do. It's true that I have high expectations and am demanding, but this is because I know who I'm dealing with”.