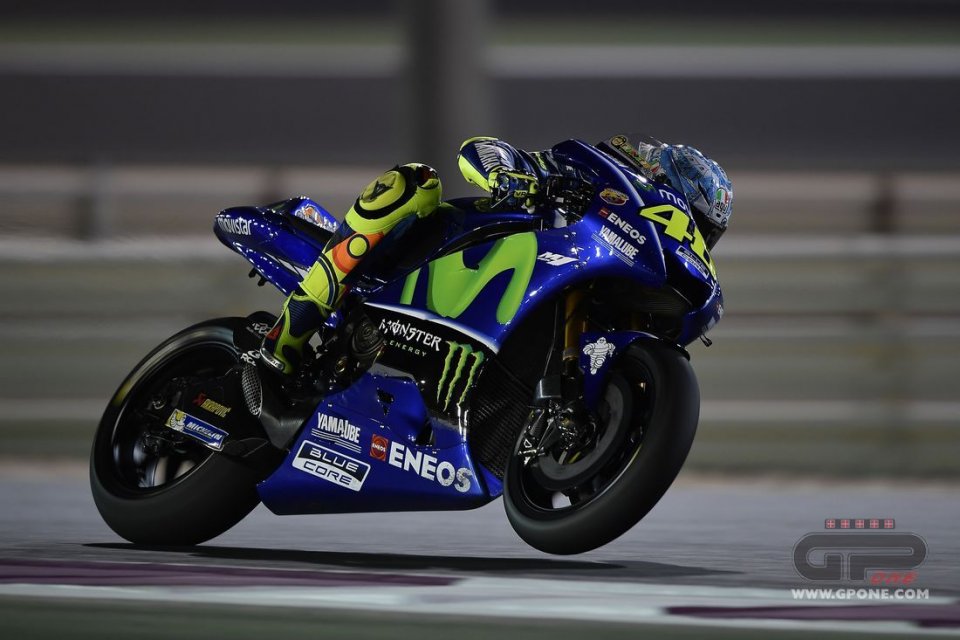 The second day of tests in Qatar had not begun in the best possible way for Valentino. A crash had complicated things and left a few marks as well, although nothing serious. “I hurt my finger and elbow a bit. I lost the front end on turn 7” he explained.

In the subsequent hours, no great progress was seen either and while Viñales, as usual, was putting record times on the sheets, Rossi seemed to be struggling. The turning point, however, came for the grand finale and the Doctor rediscovered the M1 he likes and his times reflected it.

“We made some rather drastic changes and I felt more comfortable - he explained - I already had a good feeling with used tyres and when I put the new ones on I was able to do a good time. That was important.”

The award-winning Galbusera & C. Company did not go wrong this time either.

“The guys have been very supportive. I saw that they had more confidence than I did sorting the situation and saying: we can do it - he smiles - We did not have any new material. The bike is what it is, but we changed the setup quite a bit.”

A reaction from Valentino and his team was what was needed, because Viñales has been on point throughout the winter.

“He got on the Yamaha and was fast straight away. He has been ahead of me practically every day - he admits - Getting closer to him today at least was a big relief, because on the other tracks I was always behind, but more importantly, there was too big a difference between him and me.”

Now Maverick is within range and the challenge becomes more interesting.

Bagnaia: "Rossi taught me to celebrate today and not think about the past...

The Scottish rider is currently involved in the British SBK championship, in the past he has raced in the Rookies and Talent Cups and will make his...
6 days 23 hours ago

The Soft tyre in the front provides riders with a very good feeling and also a strong grip on maximum angle. The Medium front tyre could also be a...
1 week 14 hours ago

At the exit of Turn 5, Miller was observed to be riding slow on line, disturbing rider #12 and causing a safety concern. Same punishment for Baltus...
1 week 15 hours ago