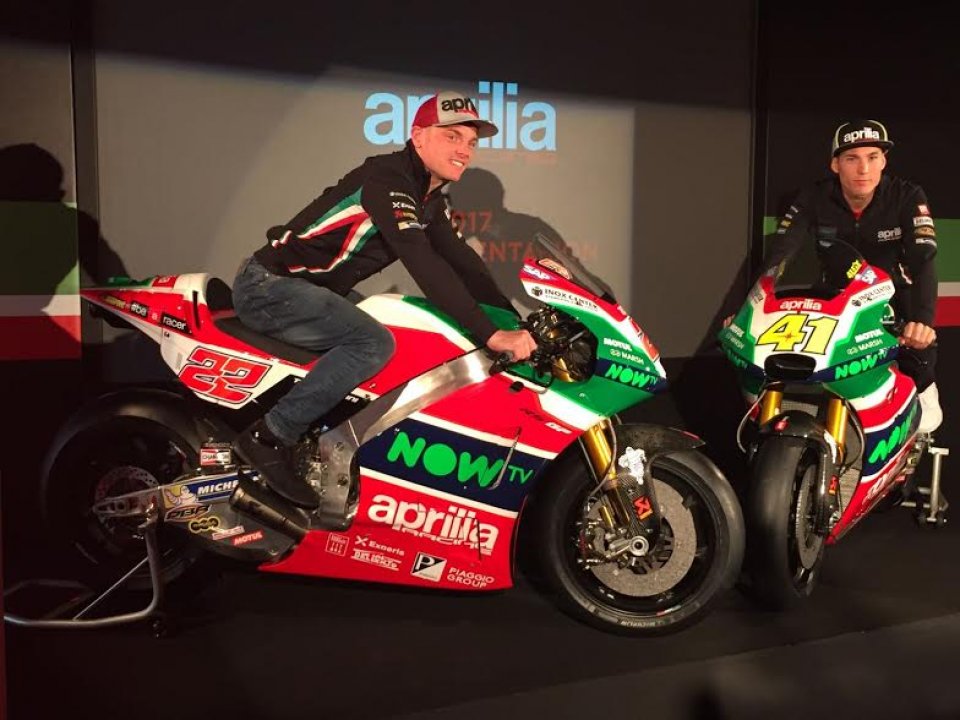 Aprilia decided to play on their home pitch and they chose Noale as the backdrop to launch their season. Just a few steps from the Racing Department where they are born, the RS-GP machines ridden by Lowes and Espargarò flaunted their new colours. The Italian nature of the project shines through immediately in the colour scheme with the red, white and green of the Italian flag, a graphic designed by Aldo Drudi.

Doing the honours was Piaggio Group CEO, Roberto Colaninno. “There is an enormous amount of work done by Albesiano and his staff, whom I must thank, to get to the point of achieving results on the track” he acknowledged before stating his objectives with a bit of humour: “Only one: to finish first. But all joking aside, the thing that makes me the proudest is to have chosen the colours of the Italian flag, which represents us. Because this bike is Italian from its first to its last screw.”

Colaninno also pointed out the importance of racing for Aprilia: “They are a fundamental time, not to make an appearance, but to comprehend the level of our technology.”

Then Racing Manager Romano Albesiano had the floor, beginning by talking about the new aerodynamics: “The fairing we tested in Australia brought results. We will test it again in Qatar to see which circuits it will be useful on. These solutions are definitely more difficult and cost more than the winglets. There has been a bit of hysteria over this topic and things could have been done in a better way.”

Then he moved on to talk about the 2017 RS-GP: “We tried to concentrate the masses more and the tests confirmed that we have taken a step forward. The engine has also improved. We are trying to achieve even torque output without losing power.” Speaking of the goals for the new season, he had this to say: “Our goal is not to simply participate, but to win. We want to stay consistently in the top 10, aiming for the top 5. In the first tests there were very narrow gaps and we will need to be perfect.”

Fausto Gresini, who heads the structure with which Aprilia takes to the track, also has high expectations. “In the last part of 2016, we took some good steps forward and the goal is to improve in all areas.”

Lastly, the two riders took to the stage: Aleix Espargarò and Sam Lowes. “We have a good relationship - the Spaniard explained - we compare notes often. We are at different stages in our careers and I think that it is better to work as a team because that way we can grow more quickly.”

Logically, by experience, Aleix has more responsibility on his shoulders. “I had some doubts before getting on the Aprilia - he recounted - but I liked it from the first lap in Valencia. It is a physical, but very stable bike and during the winter we continued to grow. The next test in Qatar will be very important. I know that it is not easy, but I not hoped for a start like this and I feel very charged up.”

For Sam, the start was a bit more difficult, coming from Moto2. “Naturally, it is a big step and it is important to do it the right way. I am starting to have fun and to ride the MotoGP the right way - he explained - The races will be different than the tests. I think that the bike has great potential and my goal is to improve constantly. I will have other rookies to measure up against like Zarco and Folger who were fast straight away and that is good for me, because last year I was on the same level as them.”