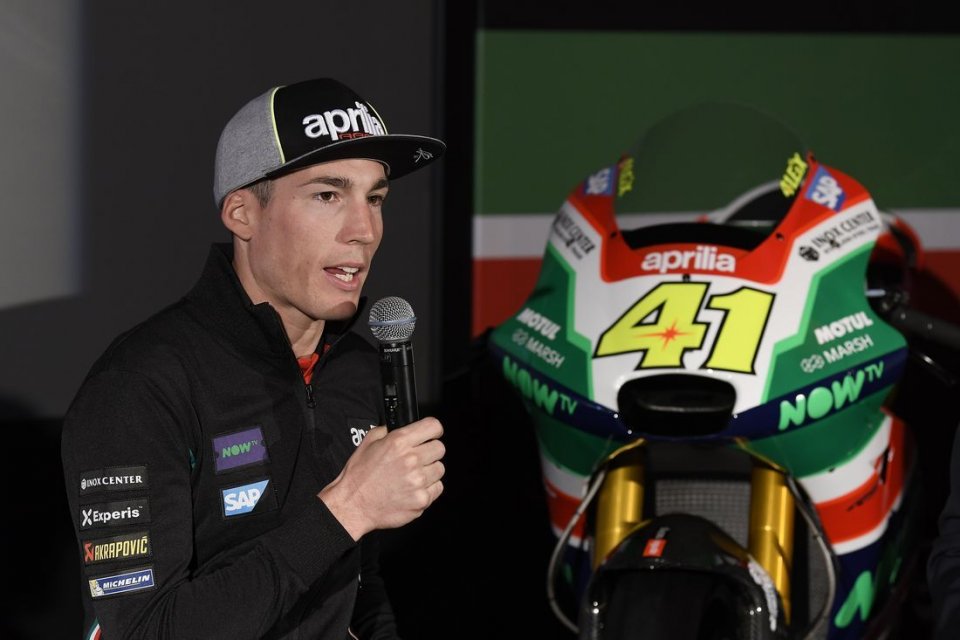 In November, after completing his first lap on the Aprilia in Valencia, Aleix Espargarò breathed a sigh of relief. After signing with Noale, his mind was full of doubts. He was coming from a bike with the potential to win like the Suzuki to go to another that provided no guarantees.

“I was a bit afraid - he recalls - because both Bautista and Bradl said that the bike didn’t turn and that the engine didn’t push. In short, I was worried.”

And what did you find instead?
“An easy bike that I liked from the first lap. It is not as agile as the Suzuki, but in compensation it is more stable. Overall, it suits my riding style better.”

Why?
“Because I am not a rider who forces a lot in braking and this bike doesn’t let me, whereas last year I was always ending up on the ground. It has a physical ride, but I don’t mind that because to have stability you have to accept that.”

What are the pros and cons of the RS-GP?
“The strong point, as I said, is the stability in braking, the front has a lot of grip. On the other hand, work needs to be done to increase maximum power and improve performance in the last part of corners in order to be able to close the trajectory coming out more easily.”

The CEO Colaninno expects great results in a short amount of time…
“I certainly did not come to Aprilia just to do some laps on the bike either. We are talking about a manufacturer that has won 54 world titles. It is clear that there is pressure and I also feel the responsibility, but I think that is normal.”

Lowes is a rookie, so you will have to lead the development. One more responsibility?
“No. To be honest, I chose Aprilia partly because they offered me this chance. I like improving the bike and in the past I was successful, first with the ART and then on team Forward. With Suzuki I also had that task because two years ago, Viñales was a rookie and I handled that end of things.”

Work will need to be done on the aerodynamics too. How is it riding the bike without winglets?
“To be truthful, on the Suzuki they were very small, but in Valencia I had tried the Aprilia both with and without winglets and I did not find a great difference.”

In Australia, on the other hand, you tested the new fairing. What were your impressions?
“The sensations were good, but we still need to figure out where it can help us and where it can’t.”

All that’s left is one test before the championship starts. What goals have you set for yourself?
“First of all, the level was spectacular – something spectacular with a lot of fast riders and bikes. The Aprilia was also fast and I am happy. The first goal is to stay in the top 10 positions to then try and stay with the top 6 riders throughout the season.”

Up to now, Marquez and Viñales have seemed uncatchable…
“The two fastest bikes are the Honda and the Yamaha and the two fastest riders have been Marc and Maverick. It is only natural that they are two points of reference”.

Did your former teammate surprise you?
“Not at all. I watched him grow in MotoGP and I know how he rides. Also, his age helps with doing a good time on the flying lap.”

Are you happy not to have him in the garage anymore?
“No, we are still friends. Last year was difficult, but not because Maverick was ahead of me. I was unable to find confidence on the bike and I was always on the ground; that was the problem.”

Now the atmosphere has changed and Aleix seems to be breathing fresh air.

THE 2023 CALENDAR The Suzuka 8 Hours, valid for the FIM World Endurance Championship, will take place in 2023 one week later than originally planned...
33 min 58 sec ago

The FS-3 Racing Kawasaki team continues to focus on young riders in the British Superbike. With Rory Skinner in the Moto2 World Championship, 19-year...
10 hours 45 min ago

His wife posted about his condition: “He is okay and in the best place possible. They will keep him in for a few days to monitor him.”
19 hours 56 min ago

Peter Oettl merges with Intact GP. The Swedish brand Husqvarna will race in Moto2 with Darryn Binder and Lukas Tulovic and in Moto3 with Ayumu Sasaki...
2 days 15 min ago