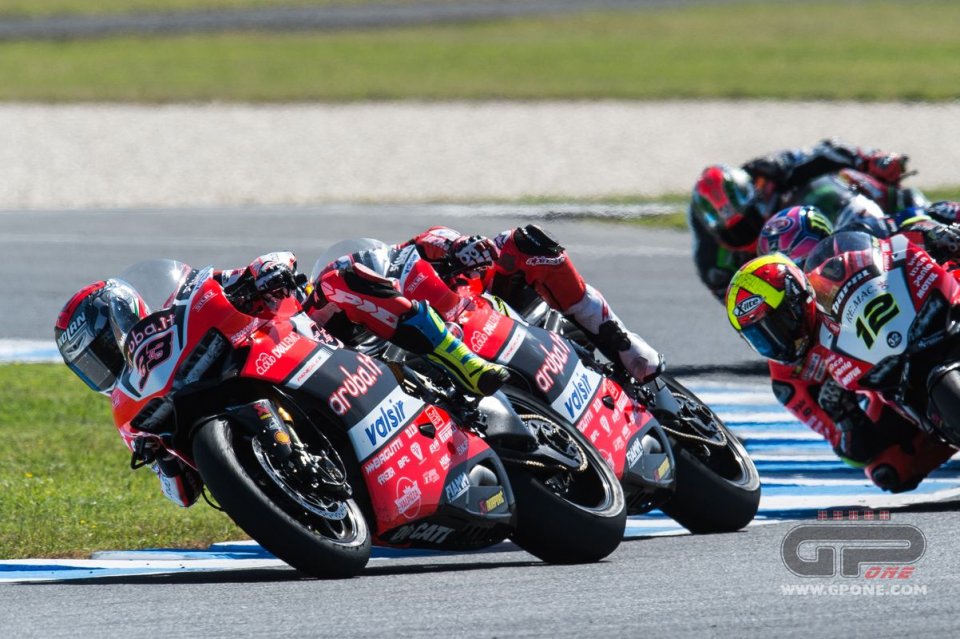 Superbike resumed from Australia with new faces, returning riders and confirmations. Anyone who got up at dawn on Saturday and Sunday morning certainly was not bored, because the factory derivative bikes ran two races full of overtaking and excitement the likes of which had not been seen for some time. Credit certainly also goes to the track itself which, for the umpteenth time, set the stage for extremely small gaps between the protagonists.

THE GOOD - Once again it was him, Johnny Rea. First he took Superpole, then Race 1 and Race 2, the latter thanks to a painstakingly planned and executed strategy that denied Davies any chance of snatching the victory in the final sprint. He could not have asked for anything more! It was not only the Kawasaki rider playing the part of the good, however, because after a year’s absence, Marco Melandri showed that he has not lost his touch. Despite his DNF on Saturday, on Sunday he redeemed himself, coming back from the tenth spot on the grid and finishing on the podium. He made his dream come true.

THE BAD - The new livery is probably the most beautiful of them all, but the performance – not so much. We are obviously talking about the new Honda. A bitter weekend for the Fireblade SP2, too far behind the leaders. It is painful to see two riders like Nicky Hayden and Stefan Bradl with a gap behind the leader that goes over one second. They still have a long way to go.

THE UGLY - Definitely the scarce, in fact, no media coverage of the category. It is true. Starting the championship in Australia with a 10-hour time difference does not help, but the 'mainstrean' media completely ignored Superbike, relegated throughout the week to a few measly lines.

THE SURPRISE - Actually more than one. In Superbike, Alex Lowes showed us a Yamaha that is a far cry from last year’s version, even capable of making a play for the podium in the first race. And then, what about Roberto Rolfo and his MV Agusta, able to beat out Lucas Mahias by a thousandth on the final stretch to finish on the top step of the podium? On the bottom step, on the other hand, was West, who started from the seventh row after blowing three engines throughout the weekend. If those aren’t surprises, I don’t know what are.

THE DISAPPOINTMENT - It may have only been his first race, but after dominating free practice and Superpole, nothing seemed to be in the way for a historic victory with MV for PJ Jacobsen. Instead, the American crashed in the race and then at the second start, he made a mistake that caused him to drop back from the leaders. We will be expecting him in Thailand for redemption.

THE CONFIRMATION - Whether you like it or not, with the inverted grid or not, the riders at the front are still the same. Kawasaki and Ducati with Rea and Davies as protagonists. Once again in Australia, they were the ones who kept everyone on the edge of their seats down to the last lap.

THE PASS - Phillip Island was the race of passes, both in Superbike and in Supersport. There is an embarrassment of choices, which we will leave up to you fans.

THE ERROR - Definitely Caricasulo’s on the last lap, hitting Cluzel and resulting in a fractured tailbone for the latter. With them it would have been a different finale. It was also a pity about what happened between Lowes and Melandri in Race 1, because the rider from Ravenna has the pace to finish on the podium.

THE INTERESTING FACT - Johnny Rea was so far ahead on Sunday morning that he called his wife and asked her to bake a cake with the number 40. He had already calculated everything, because in the afternoon he hit the target.

I TOLD YOU SO - Federico Caricasulo had seen far beyond Superpole. “Look, I am pleased about the front row, but on this track you can’t make predictions. The riders who start from the seventh row have the same chances of finishing on the podium.” The row from which Rolfo and West started, remember?