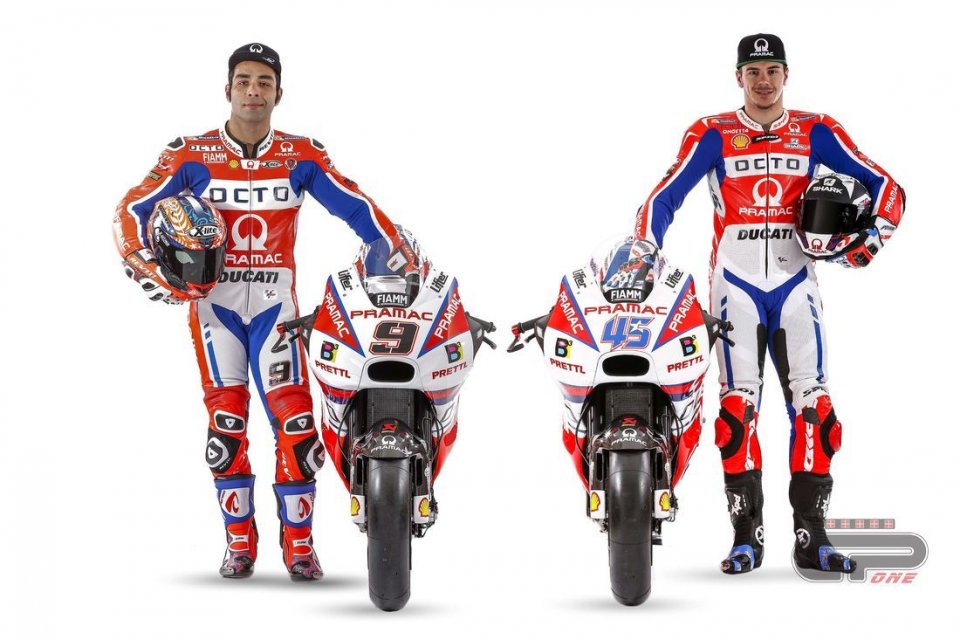 Like Venus, the Team Octo Pramac Ducatis were also born of foam from the sea. The sea that surrounds Naples and laps at the ramparts of the Castel dell’Ovo. A beautiful backdrop for the launch of the new season. Patron, Paolo Campinoti joked before the bike was unveiled: “A bit of superstition never hurts and here we are in the right place.” Danilo Petrucci followed his lead: “Are you saying that both Vettel and Rosberg were here before winning the title? Well then it brings good luck.”

For the Italian team, 2017 will definitely be an important year, with both the Italian and Scott Redding reconfirmed and different bikes. The Briton will have the GP16, whereas the Italian will ride a GP17 identical to the ones ridden by Lorenzo and Dovizioso. “Even a little better - promises Gigi Dall’Igna, Ducati Corse General Director - considering the fact that he will test the developments that will then go to the two factory riders.”

And so, the white, red and blue bikes must be not only beautiful to look at, but fast as well. “These colours already make them fast”, Redding smiled.

The team’s morale is high, but they are also well aware that there are many rivals and particularly tough ones. No one knows this better than Francesco Guidotti, the team manager, to whom it falls to sum up the situation: “I expect a very difficult season start. The level of competition is extremely high. Plus, the rule changes - referring to the winglets - seem to be a stumbling block aimed specifically at us. That will make it all the more enjoyable to finish ahead of our adversaries.”

It is the right spirit.

“Every season has its own peculiarities - he continues - This is not the first time we have managed a factory bike; we know how to do it, plus we will need to try to help our riders grow. Danilo will have a huge responsibility because he will test innovations on his GP17. It is a risk, but a calculated on, and I think that it will make a difference when we are able to fine-tune the new Desmosedici in a short period of time.”

Petrucci is coming off a difficult season, but it seems like the winter break has helped him rediscover calm and focus.

“The important thing is not to ask him to take a step longer than his leg - Guidotti emphasises - Getting on a factory bike does not automatically mean winning. He will have to grow consistently and gradually.”

And then there’s Redding.

“I noticed that he has found stability. He has found an even keel - he commented - Now everything revolves around training and it is all positive. For now, his tests have been the opposite of last year. He had found an easy bike in the GP15, whereas it took him longer to warm up to the GP16, but he is working well.”

The last question for the team manager is: in Valencia would you be happy if…

“To be honest, I haven’t thought about it. I think that this will be a championship to experience race by race.” It seems like a circumstantial response and in the end Francesco admits: “I’ll be happy if we have two factory bikes in 2018.”