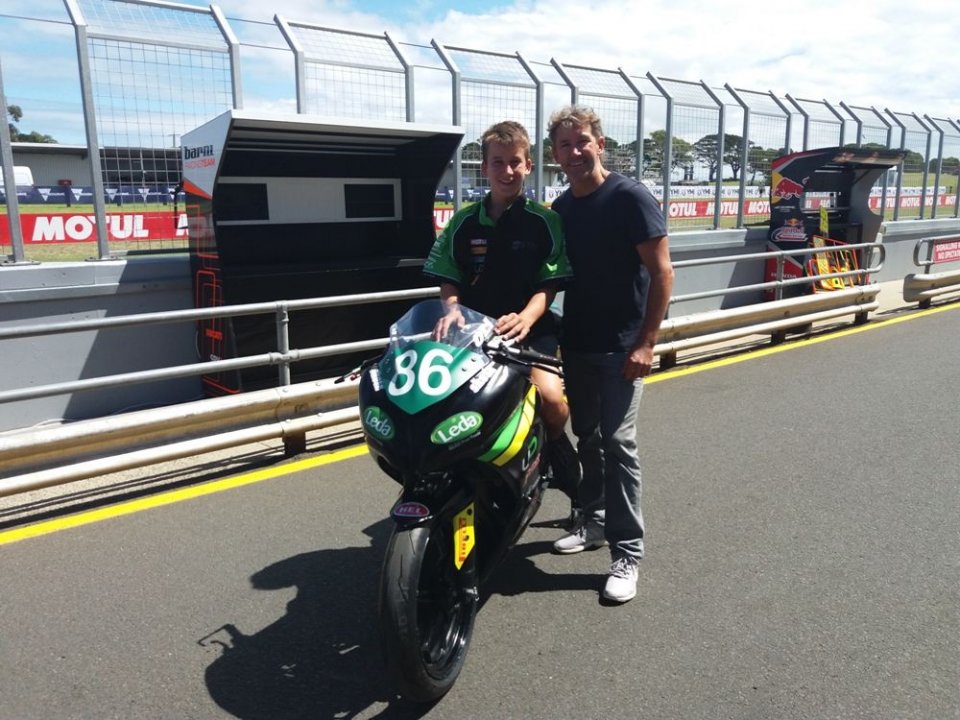 It was clear he'd be in attendance at this opening round. Of course, as Phillip Island is like a second home to Troy Bayliss. There are those who stop him for an autograph, for a photo, or to simply shake his hand. Time moves on though, as this time the Australian rider is not just a spectator but also has to closely follow his team, taking part in the ASBK. Among those present on track this weekend, there's also his son Oli, debuting in the SuperSport300, riding a Kawasaki with team Cube.

“It's a difficult feeling to explain. Oli is like his dad, he wants to finish in front of everyone. I can see he's revved up but calm ahead of this weekend and I'm sure he'll have fun. There are many Superbike fans in Australia, it's always great to be here”.

What has he learned from you?

“We often train together, but I'm trying to change my style, mine's a bit too old-school. He learns from me but I also learn from him, it's useful for us both”.

What advice have you given him?

“It's always hard to give advice, because I'm looking at it as a dad and not as a rider, manager or engineer. I see him very relaxed, he's the youngest in the SuperSport300 field, but he's not lacking in ambition. He doesn't say it but he would like to reach the podium, but if he finishes in the top five that would already be a great result”.

When will see you back in Italy?

“I was coming once or twice a year, but for now I don't have any dates planned".

Did you follow last week's testing here at Phillip Island?

“Sure, there was a good battle. Vinales is looking good, he's proving to be a rocket”.

Lorenzo and the Ducati struggled a little. How long will it be before we see him competitive?

“Jorge is strong, but he needs some time. He can definitely win some races, but I don't think he can fight for the title.”

“I don't know, Casey is always strong and in Sepang he proved that on day one. He's immediately quick, while the others need more time. No-one can ride the Ducati like he can”.

Who are you betting on for the MotoGP title?

“Valentino, I think he's the favourite”.

Here in Australia there's also Marco Melandri. Can he surprise us?

“He's very talented and has the right mentality, he's shown to be fast right away. It might be a problem for Davies to have a team-mate like Marco”.

People are expecting a Rea-Davies head to head this season. What do you think?

“Johnny is the favourite, but Chaz is up there too. He needs to put together a consistent first part of the season, avoiding any mistakes”.

How do you see Race 1 panning out?