If you search YouTube for the best two-wheeled duels to have taken place at Imola, you'll undoubtedly come across that between Toprak Razgatliogu and Federico Caricasulo. 2015 was the last year of the Stock 600 category, and was suitably marked by a last-lap battle that electrified the circuit. In the end it was the Turk who won the day with Caricasulo falling at the Rivazza, but despite that, the memory of that heroic fight lives on. The Ravenna rider was just starting to make an impression, and his 2016 season began with an extraordinary podium at Phillip Island, in his debut Supersport event: “I never expected to achieve that kind of result at the first race - explains Federico – though I admit that things had been going well on that Saturday, up to the podium. But no, I definitely didn't expect it”.

Were you pleased with how the rest of the season went?

“We had some highs and lows, due to some problems and our inexperience in the category. From Misano onwards, we were back on the right track, consistently among the frontrunners. As a first season, I don't think it went badly, on the contrary”.

In terms of results, #64 proved convincing, so much so as to convince Yamaha to sign Caricasulo up for its new Supersport project, which will see the new R6 take to the track.

Though the championship has still to begin, how do you feel about being in a factory team for the first time?

“I'm extremely proud, and also feel some responsibility. I'm really happy that of all the riders they've chosen me for this new project and to ride the new R6. The package is definitely first-rate”.

Could the fact that the bike is making its track debut be a big disadvantage? In Superbike it was in a way…

“I think there'll be less problems to adapt in Supersport, considering that the bike is very similar to the old one, unlike the new R1 which is very different to the previous bike. Yamaha also has some data, so the fact it is a debuting bike shouldn't be a massive problem”.

Was it difficult to leave the Evan Bros team, based around you and with which you'd spent several seasons?

“They were more of a family than a team to me, and the relationship we have started out as a friendship, before becoming also work-related. We had three intense seasons together, so it wasn't easy, but I needed to change team to grow, so it was the right thing to do”.

In 2015 you battled against Razgatlioglu for the STK600 title, while this year and next you'll have to deal with his mentor Sofuoglu. Can we say that Turkey is part of your destiny…

“Yes, I've always had Turks to beat (he laughs)! Toprak (Razgatlioglu) was, and is, very strong, but unfortunately Kenan's even stronger, he remains the man to beat”.

You almost beat him already this year though, at Misano.

“True, and that why I think that if everything's going well, he can be beaten, at the end of the day he's human like everyone else. He's very experienced but I think I can put up a good fight”.

“I hope so! It's difficult to say right now, also because we haven't even completed the first tests, but as long as we don't have any particular issues, it might be a possibility”.

In 2017, with Caricasulo in Supersport, Faccani in Stock1000 abd Melandri in Superbike, Ravenna could clock up numerous wins… you could put together a team like the MX of Nations.

“Not a bad idea! But it's better we stay on track, also because I still have to improve a lot when it comes to MX. Let's say we could create a Stock1000– Stock600 of Nations…”. 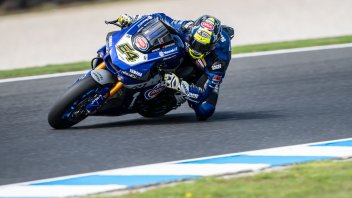 The Dutchman: "In the afternoon I had some problems with front end confidence"; Razgatlioglu: "Too many things to try confused me; my head is...
3 days 9 min ago