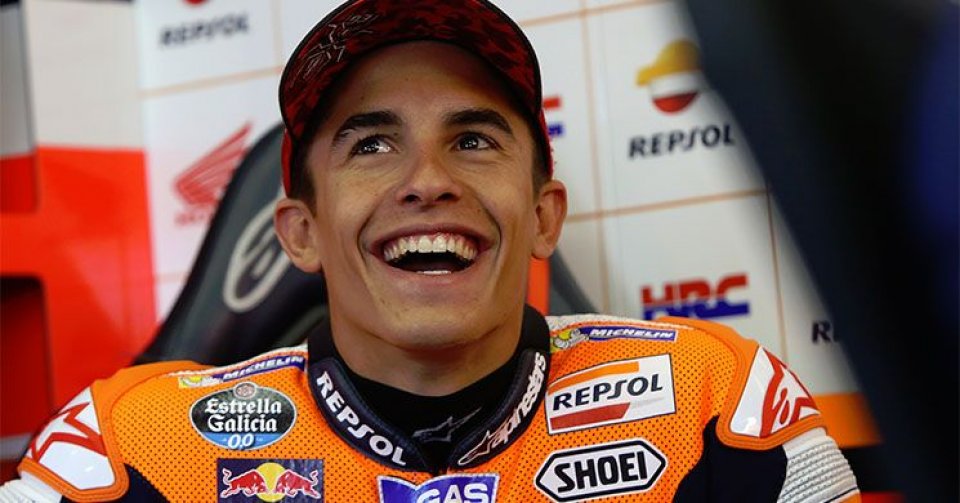 Marc Marquez welcomed Sky to Rufea, the Spanish training centre where he prepares for the world championship. Having presented the structure during an event with tomorrow's world MX champs, the champion from Cervera talked at length to Sandro Donato Grosso. The subjects under discussion included the 2016 season and his feelings ahead of next year. He also spoke about his rivals Valentino Rossi, Jorge Lorenzo and Maverick Viñales, as well as Andrea Iannone.

You have everything here at Rufea.

“There's an MX track, flat track, dirt track, I live 40 minutes from here. It's like my second home, when a race doesn't go to plan I come here to train with my brother and relax. In the past, Rabat would come too, particularly during the year he won the title but now he trains in Almeria”.

You have a programme aimed at youngester, in collaboration with Allianz.

“The guys send in videos, which I evaluate personally. I've received over one hundred, from various countries. I spend days with them, including breakfast and dinner. It's great because they are sincere, they ask me all kinds of things”.

Are you also considering a school like Rossi and Biaggi?

“Not right now, also because I'm still young. I still have many things to do, but it's a great experience anyway”.

“If you'd told me that at the Malaysian tests I would have thought it impossible. But we started out with the right foot, then the second part of the championship went a lot better”.

“Holland and Germany I think, those were very important points, because I was able to build a consistent lead. As a result it became easier to control the situation. Aragon was also an important race, because Rossi was very competitive”.

Which was your favourite race?

“I'd say Aragon. It was a positive weekend, I thought it was key in terms of the championship. Japan is also one to remember, a track I don't particularly like. In the past I'd never won at Motegi in MotoGP, while this time I was also able to secure the title”.

Where is the line between Marquez the numbers man and Marquez on the attack?

“It's a question of confidence. Basically, this mentality came about following the difficulties we had early on in Malaysia. I realised that to achieve the title something had to change. I don't continue to take risks”.

How much did Marc Marquez contribute to this title?

“We all did really well. To be MotoGP champions, you need the team, the bike and the rider. You need the whole package to be competitive and win”.

You appeared in difficulty during testing.

“It's true, I was struggling, I had good sensations in Australia because that's a track I like. But it was clear that we were having a hard time”.

Yet the recent Valencia test went a lot better than it has in the past.

"Definitely, we're already at a good level. Perhaps I was expecting something more in terms of acceleration. We're suffering with some wheeling but it's under control. The frame remains the same, because I feel good through the turns”.

“I don't know, at about 80% I think. We need to find that missing 20% over the final test days in order to be fast at first race inQatar”.

Did Jorge surprise you with his first Ducati test?

“I didn't expect Lorenzo to be so quick at Valencia. He'll be able to win races”.

Can Lorenzo fight for the title?

Would you have changed team as he did?

“I can't say, it all depends on your confidence. I feel good with the Honda and my heart says the same”.

“I thought he'd be this fast, he's already proved that in Suzuki. After two years that haven't been easy, you're stronger when you get on a complete bike like the Yamaha. He'll be fighting for the title right from the first race”.

What do you think about the Rossi-Vinales relationship?

“I wouldn't know, I think they could have a good relationship. But it's not easy to have a friendship with your team-mate”.

Who are the 2017 title contenders?

“Lorenzo could win some races, maybe even the first, but I'm not sure about the title. I can see Vinales in the fight, as well as Rossi. Over the last year Vale and Maverick have proved to be strong”.

“I like him, because when Andrea's around, there's always a good fight. He's very aggressive, we need a rider like that. Also, at Valencia, he was only two tenths from my Honda”.

At Barcelona you shook hands with Rossi. Did it work?

“I think so. The world championship was going through a hard time due to Salom's passing. After that race, the atmosphere at the track was different, there was more professionalism”.

We've seen that Lorenzo flashes the cash, buying a Ferrari, a Porsche, and recently he's opened a Museum. You?

“If I have to think of a gift, I'd buy myself a bike. I have a BMW because I've won them by getting pole position. I don't have any Porsches, or Ferraris. We have a different lifestyle Jorge and I, I like to live a normal life”.

We never see you surrounded by friends or a girlfriend at the track like other riders.

“My friends come to watch the races, but the track is my place of work and so I prefer to stay with my team”.

Do you have a girlfriend?

What do you want for Christmas?

I can't ask for anything as I have all I want. Perhaps my health, hoping for a crash-free 2017”.