The 2016 Moto3 season didn't get off to the best start for Enea Bastianini who, up until the Mugello race, had only scored a best of fifth place, achieved in the opening race in Doha, Qatar. Besides, an injury to his right wrist, sustained while training with his MX bike,  forced Enea to sit out the French race: “but everything's good now - confirms Enea today - I'm recovering well, I've had the plate in my wrist removed and will soon start training again”.

From the seventh Barcelona round onwards, the Rimini rider's championship improved and the third step of the podium, his first of the season, reinforces the Honda rider's words: “I started the year with new team members - explains “Bestia”- and had my first problems in the race; in practice I was quick but struggled on Sunday, I started out well but then lost positions and couldn't catch back up. But, around mid-season, some new parts arrived that really helped and thanks to various modifications, I was able to find the feeling I needed to be able to ride as I wanted until the season's end”.

Were these radical or minor modifications?

“In reality they were only small changes but really made the difference for me; we worked on the front of the bike and the improvements were immediately clear to see; from then on, I was able to ride as I wanted ”.

Enea's best moment of the 2016 season came in Japan, where he scored an authoritative win at the Motegi track. His problems appeared to be over but then, at the following race in Australia, he suffered another blow, fracturing a rib and a vertebra when Navarro's bike ran over him after a group crash.

It's better that Enea looks ahead, as he'll have a new home in the shape of the Estrella Galicia team…

“At first I was in difficulty because I realised that the team's work method was very different to what I was used to; the atmosphere is different, they are all more serious and focused. But I immediately adapted and we already worked well together during the Valencia tests”. 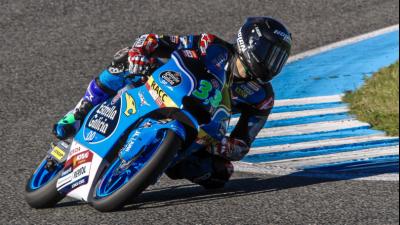 Did you choose Emilio Alzamora's team to be sure of a MotoGP future with the Honda?

“No, to be honest no. I wasn't thinking about MotoGP. My choice came down to ensuring myself of a great 2017 and I believe that I've made the best possible decision for my career. Then in the future we'll see”.

“I'd like to say something - I have to thank Gresini for all he's done for me. Every so often he and I would argue but this was normal, considering the work we were doing. I have always liked Fausto and know that that is reciprocated, our relationship won't be affected”.

Next year there's no Binder, but there is Fenati…

“Yes, Romano could be a really tough rival, but in reality, I don't know. After the KTM of the Sky VR46 team, he'll have a Honda, with team Ongetta, and we don't yet know what his potential could be. But Fenati won't be the only tough adversary that I'll be fighting against”.

Speaking of victories, Bastianini would like to find a nice 2017 gift under the Christmas tree: “for next year my goal is to win more races. After having finished championships in third and second place, with Emilio Alzamora's team I want to try and win the title”.

If you were to win the title, would you stay in Moto3 to defend your title or change category?

MotoAmerica will return to the Brickyard for the first time since 2015 in 2020, but it will do so now on October 9-11 after a schedule change due to...
5 days 5 hours ago

“It would be great for the sport and the country if the interest of the past returned. Hayden was one of my heroes and I cried when he won"
5 days 11 hours ago

The 2020 MotoAmerica Series round at Michelin Raceway Road Atlanta has been postponed to the July 31-August 2 weekend due to the ongoing COVID-19...
5 days 15 hours ago

The 7-time AMA Superbike champion charged in New South Wales. Arrested and then released on bail of $50,000, his passport was revoked.
6 days 6 hours ago