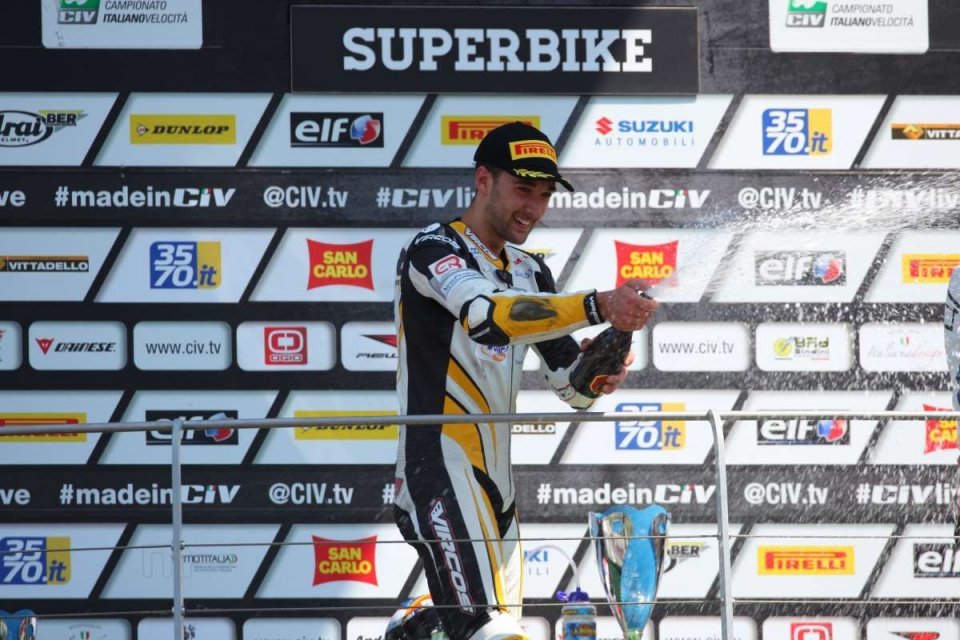 His last appearance in Grand Prix Motorcycle Racing dates back to 2015, hen Stock and CIV, where he took third place last season behind Baiocco and Calia. For Matteo Ferrari, 2017 promises to be a key year, so much that it can be considered as a springboard for a return to Moto3.

Next year you are back with BMW.

“Exactly. The 2017 programme has been confirmed and I will restart with the same team. I had various offers from Stock, but I prefer to solidify the work in CIV.”

From Grand Prix Motorcycle Racing to CIV could be a step back.

“Initially it could seem like that, but this is the only concrete opportunity to relaunch myself. I went from 250 to 1000 and I am pleased to have expressed myself in the best possible way in this category.”

“I did not think I would do this well, since my goal was just to get some experience. I finished third. At a certain point, I even dreamed of winning. It’s a pity about Imola, the race that conditioned the season.”

How much changes between CIV and Stock?

“The level between CIV and Stock does not change much. Maybe in the latter it takes a bit more experience, since there are more races and fewer tests.”

Do you think CIV and CEV are very far away?

“The difference is decreasing, partially because lately factory bikes have joined CIV. Maybe in CEV some manufacturers have decided to invest more, like Honda and KTM. However, now the times are changing, so I don’t think you necessarily have to go through CEV to get to Grand Prix Motorcycle Racing.”

I’ll win CIV and then go to Grand Prix Motorcycle Racing. Could this be the message in 2017?

“Sure, the goal is definitely to get back into Grand Prix Motorcycle Racing. Obviously, I am aiming for the title. I don’t think it would be very logical not to.”

“I think the Team Italia experience is one to be forgotten. The conditions were not there to do well. We didn’t even have a factory bike to help a rider grow.”

We have seen that you train with the VR46 guys sometimes.

“Exactly. I often spend time with them at the ranch. I am not in the Academy, but training there is already a privilege. This year Pirro also followed me and following his advice was very helpful."

How could Stock help you grow?

“First of all, the tyres are the same for everyone, unlike CIV, so everyone can aim for the win. That way it is easier to assess the qualities of the rider.”

What does BMW have that no one else does?

“Recently I tested the Aprilia at Mugello as well. I am still convinced that BMW is the best factory bike. Maybe a few steps need to be taken on the electronics. In the dry we do well. In the wet we struggle.”

Ezpeleta: "there will be only one Grand Prix winner, Sprint Race doesn...